With a backlog so big, what shops go up when is going to be a bit scattershot, and for some of these it's been the better part of a year since I ate them, so I'll do my best to keep my tasticular memories straight. So expect a lot of jumps in time and space from Ramenate from here on out. A good bowl should take you to another place, right? In any case, for my first bowl back in the blogging fold, I had better pick a good one, no? 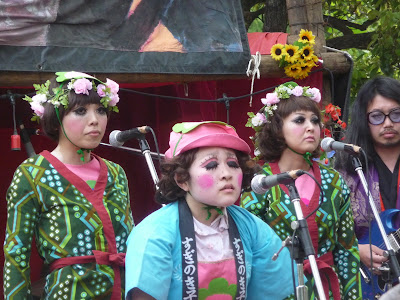 It was the first days of summer, so what better way to enjoy the newly sweaty weather than a free outdoor concert? Performing for the people in the bike parking lot of Nakano station were Tokyo's favorite 60s freakout revivalists, Delicious Sweets. 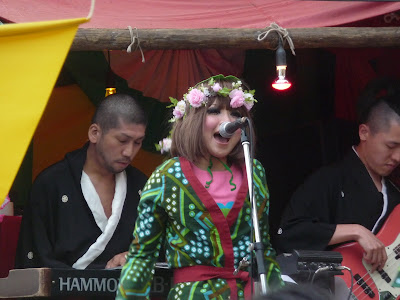 Every town has their rotating group of nubile girls that wear day-glo miniskirt kimonos while dancing and performing skits to the tune of psych rock shakedowns. Oh, wait that's just Tokyo. Delicious Sweets are pretty ubiquitous, and if you hang out in western Tokyo chances are you'll accidentally catch them confusing passerby sooner or later. 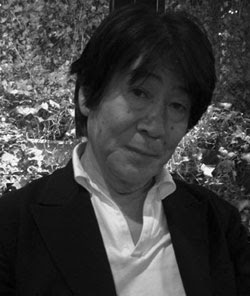 In attendance at this particular gig were none other than international photographer superstar Moriyama Daido, discreetly snapping away... 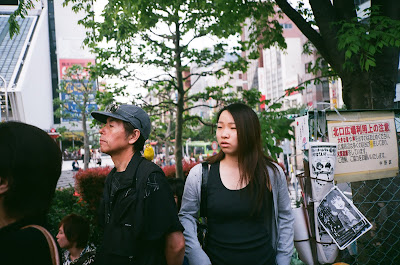 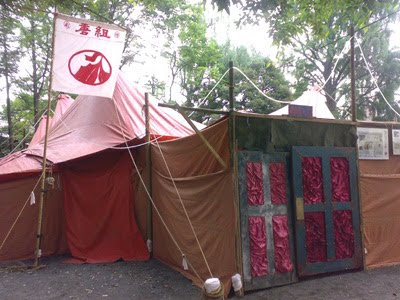 But, not content to fill my Sunday evening with just one sixties-era throwback performance, I skedaddled a few stops down the line to Shinjuku to meet some pals to see the new play by radical underground theater guru Kara Jûrô. This year's play was entitled "Hyakuninchô", and told the story of - serendipity baby! - a ramen shop with a hidden secret that serves as the portal to a wild and nonsensical anti-gentrification adventure. After a couple of hours sitting cross-legged on straw mats inside Kara's iconic red tent and snacking on sake and dried squid, the crew was ready for some real ramen. 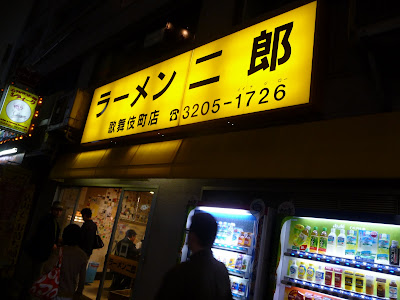 Fortunately for us, but unfortunately for our pants, the Kabukichô branch of the one, the only, the infamous Ramen Jirô was just around the block. 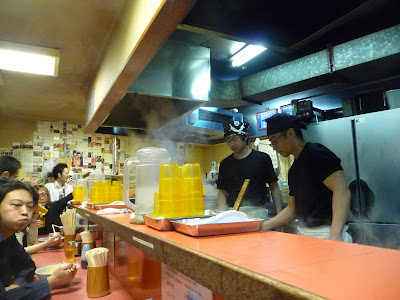 Despite the seemingly intense location of this Jirô amidst the host and hostess clubs of Japan's biggest nightlife district, this is actually one of the more user-friendly Jirô shops around. Water is provided, as is a list of toppings that true Jirô devotees should know by heart (extra veggies, garlic, lard, and "karame" soy essence, just for the record), and even... 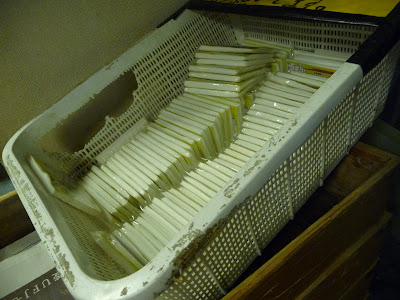 Free tissues! The scandal. Does this even count as a true Jirô experience? For those of you unfamiliar with the girth of this unique shop, check out some of my previous Jirô visits. 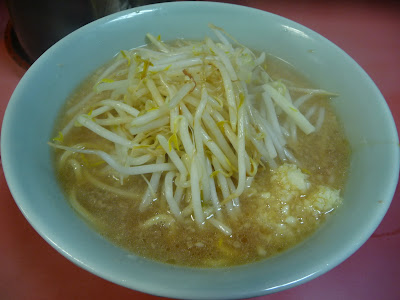 The bowl too is relatively reasonable, lacking the sheer volume and height of noodles and veggies of some other shops. 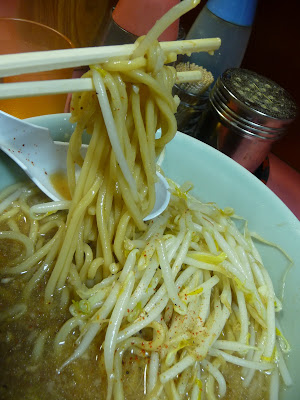 That said, I ain't hating. This Jirô may be a bit more refined than some of its sister stores, but the balance is right on, the noodles are just as thick and chewy as they should be, and the garlic just sinks right into the strangely sweet yet oh so salty tonkotsu shôyu (soy sauce and pork bone) broth. 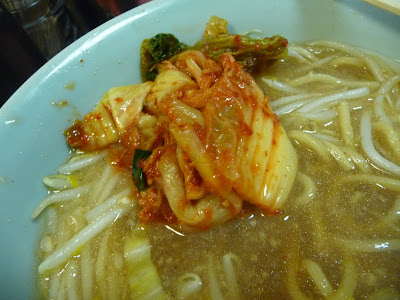 And I've never been known to complain about a kimchi option! 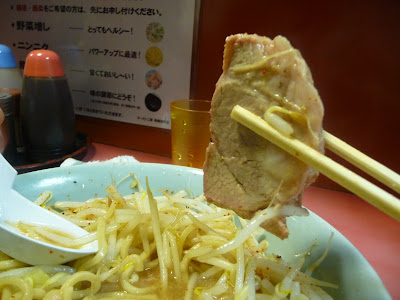 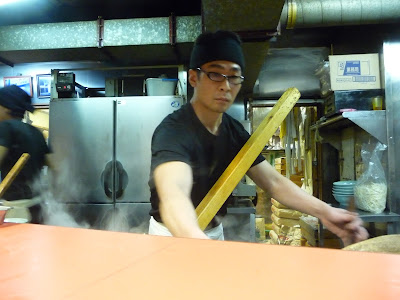 ...or just are in the mood for food cooked with a two-by-four, Jirô Kabukichô will do you know wrong, though your gut might blame you later. Treat yourself to some ice cream and people watching for dessert!
Posted by Nate at 10:38 AM

Thanks for the information, hopefully useful and successful continue


Thanks for the information, hopefully useful and hopefully your day is fun


Very useful information, thanks and good luck for the future

If you have a history of illness that is difficult to recover, maybe our next article will help you to recover

Given article is very helpful and very useful for my admin, and pardon me permission to share articles
here hopefully helped :

Given article is very helpful and very useful for my admin, and pardon me permission to share articles here hopefully helped :