You may have thought Ramenate was dead. You may have bemoaned it's passing. You may have forgotten about it completely. Alternately, you may not have even noticed that I haven't posted in about four months. There's been a good reason for my absence - I have taken my leave of Tokyo (for now), and have moved back to New York, where my time has been spent on academic endeavors, which hasn't left so much blog time. Then there's that thing about not having a regular internet connection. 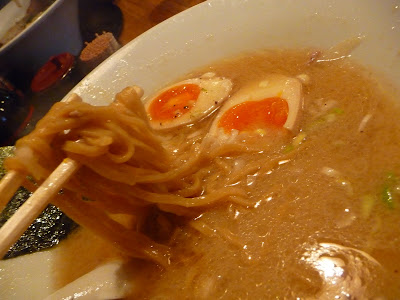 But! This does not mean the end of Ramenate. As I mentioned a few months back, there are still literally dozens of bowls I downed and still intend to post, shops to be shared with the world.

But! The siren call of 1920s avant-garde Japanese periodicals (and the footnoting thereof) grows ever louder.

And Thus! You can expect a (perhaps somewhat sporadic) return of Ramenate, albeit following a new format.

Specifically! Rather than extended "dissertations" about the material circumstances surrounding each bowl, I'll be posting just a few pics with a brief description and assessment of the shop.

And so! There will still be the historical details, ridiculous digressions, moribund pop cultural references, and snarky graduate student prose you have come to expect from this blog - just in far more compact capsules.

Because! Shorter posts are better than no posts at all, no?

In addition! Posts will now include the address of the shop, and if I can figure out the relevant technology, a google map (and if I can't, a link to the Supleks Ramen Database that includes a google map).

And! For those of you who have written with questions, comments, asking to meet, asking for recommendations, or whatever else over the past few months and not received a reply, I truly extend sincere apologies. You probably think "i wrote that ramenate and he never wrote back - he is probably a dick who thinks he is too good to write back to noodle amateurs / friendly travelers such as myself." My life has been in Transpacific transition since approximately late July, and is just now settling into normalcy (read: I have a chair in my apartment), and all ramen related matters fell by the wayside. Again - my apologies, and if there's something you'd like to ask, please try writing again, or leaving a comment, and I'll do my best to get back to you.

Finally! I have resettled in Sunset Park, Brooklyn, New York City - one of the city's numerous Chinatowns. So, for those of you wondering if I'm going through noodle withdrawal, don't worry. It may be tough to get a good bowl of "ramen" in the states, but I'm just a couple blocks walk from plenty of freshly made "lamian!"
Posted by Nate at 11:09 AM

Natedoggg!!! The ramen world misses ya!

The Tokyo ramen show was last weekend -- I hope those of us there did you proud!

You have really selected the suitable topic; this is one of my favorite blogs.
https://www.travelblog.org/North-America/United-States/Florida/Miami/blog-1032098.html