The cherry blossoms were just starting to bloom as winter at last began its slow retreat. (Yep, I'm way behind on posts again). Check out these psychedelic colors - no digital manipulation here, that moss really is that neon green! 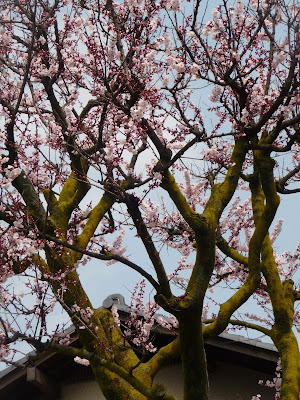 Sakura time is definitely associated with fun for the new season - warm weather, outdoor drunkenness, and generally enjoying of life after the long cold season. So it was only fitting that my friend Y and I decided to grab our next bowl at Ramen Dôraku ("road to pleasure") in Yoyogi. 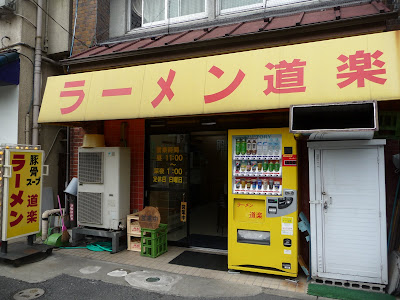 Located on a somewhat lonely corner on a distant block among the tall buildings of West Shinjuku, Dôraku has been rocking ramen for a full 25 years. Another favorite pick of the always estimable critic Takahashi Jôji, Dôraku has paid its dues since well before the ramen boom. 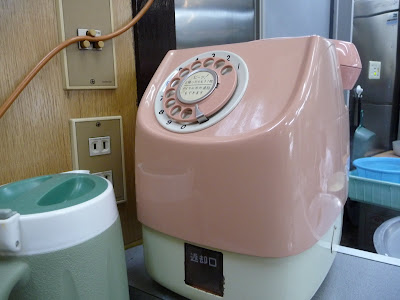 I've recently been trying to search out tasty shops that have been around the block, rather than just trendy new places, but it can be hard to tell which of the faded old-school awnings house good bowls and which are just mediocre. But there's no way to find out except for hitting the streets hungry to try them out - you can't just sit by the rotary phone waiting for the ramen gods to call. 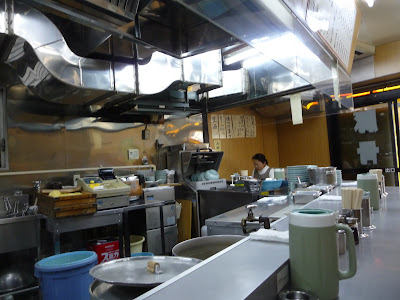 Inside, Dôraku is simple and no frills, with a spacious steel counter and little else. A good deal of the customers seemed to be regulars which isn't surprising - I'll bet a lot of the salarymen who work in the area make this a standard stop on their lunch rotations. The radio chattered away while the aging master and his wife puttered around with pride in their work. 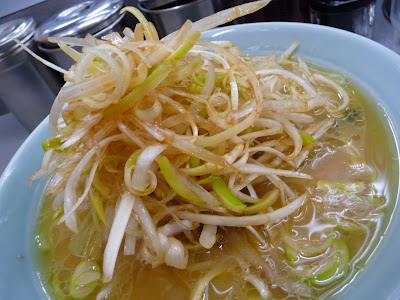 The star menu item at Dôraku is the negi ramen - a bowl of old-fashioned stripped down tonkotsu shôyu (pork bone and soy broth) topped with a heaping mound of sliced onions. There was a giant plastic bin the size of an industrial strength trash can in the corner used for the sole purpose of soaking the onions before poaching them in soy sauce. 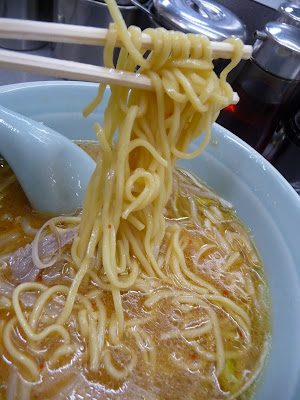 Despite having a satisfying and rich flavor, Dôraku's ramen isn't too oily or salty. The model is what might be called Tokyo tonkotsu - strong pork broth dyed brown with soy and plenty of lard; a far cry away from the bone white Hakata broth, it's like a scaled down Ramen Jirô and shares affinities with Yokohama-style ie-kei ramen... 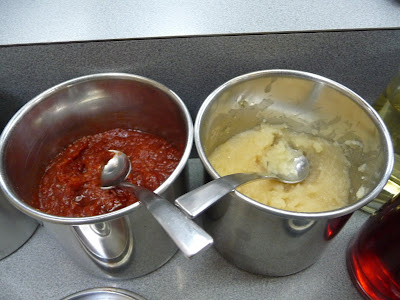 ...an impression made stronger by the fact that chili paste and raw garlic are provided tableside, just as with Yokohama ramen. Ie-kei most likely began as a modification of a style like this - fatty soup being served at a time when ramen still generally meant old-fashioned shôyu and little else. While not mind or tongue altering, Dôraku serves up an eminently eatable bowl that's a hold over from another era - let's hope it lives to see another 25 years.