I feel like I've put up a number of posts recently that begin something like "So I was eating ramen in Kabukicho again, but don't get the wrong idea, it was the middle of the afternoon..." This is another Kabukicho bowl, and this one was eaten at a properly Kabukicho-appropriate time...something like 3 AM.

It had been another late night out drinking in Golden Gai, and you wouldn't believe how time flies when an off-duty wrestling referee with crooked teeth is explaining the tricks of the trade. Not wanting to end up in a sleeper hold on the street, I decided that a quick bowl would be in order to put the rumbles in my stomach down for the count and make sure I didn't wake up with a wicked hangover. 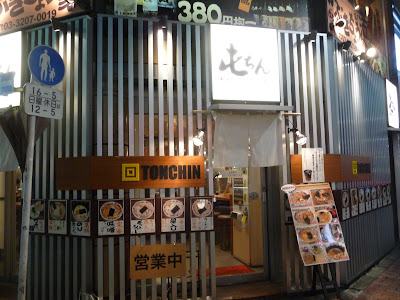 Right along one of the neighborhood's back boulevards, Tonchin occupies a prominent place on the promenade of pimps, pushers, playboys, Yakuza, and uh, camera-toting Taiwanese tourists that is Kabukicho. I had heard good things about Tonchin from rockabilly ramen critic Takahashi Jôji, as well as a couple of friends and acquaintances, and I had been meaning to try it for a while, but like with Kyushu Ramen down the block, had been saving it for one of those late nights. 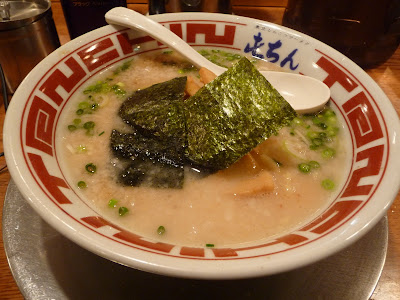 I tried snapping a couple shots of the inside of the shop, but I'm gonna be honest, they all came out too blurry to use. They seemed clear at the time...surprise, surprise. Nonetheless, by dint of not having my head down on the counter, I was still doing better than plenty of the other patrons. Tonchin keeps it clean and professional, but the same probably can't be said for the motley crew of bouffants that find their way in here at 3 AM - mostly drunken salarymen and assorted sex industry errand boys and girls. They come for this - Tonchin's Tokyo Tonkotsu. 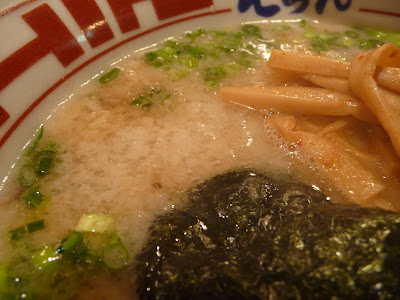 When you've got the beer munchies, nothing hits the fat quite like a bowl full of creamy spots...or is it the other way around? This creamy but smooth broth is loaded with suspended fat, which probably isn't too good for the body, but then again, neither is finding yourself in Kabukicho at 3 in the morning. Tonchin works off a tonkotsu (pork bone soup) model with plenty of salty soy essence, rather than Hakata or Kumamoto style purer pork taste. 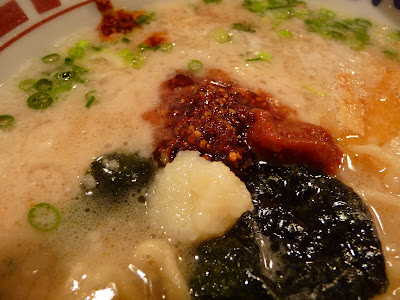 This Tokyo tonkotsu (which is really a tonkotsu shôyu for those keeping track) is also kissin' cousins with Yokohama ie-kei ramen, as here you'll find side servings of garlic and two kinds of chili oil. But of course, this isn't Yokohama, so don't go looking for the trademark three slices of nori seaweed - you'll only find two. 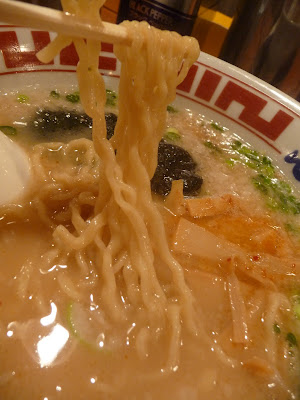 Tonchin's noodles are also surprisingly excellent - fat, curly, and a bit flat. Tonchin, which also has a branch in Ikebukuro, serves only jika seimen - their own brand of specially made house noodles. You can't go wrong with tasty noodles from factories like Mikawaya Seimen or Kaikarô, but jika seimen almost always taste that much fresher. 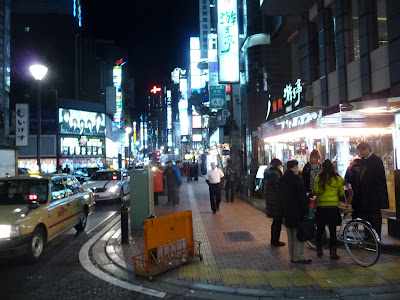 Tonchin really hit the spot, and I'm pretty sure that it'd be (almost) as good sober. The bowl here is pretty close to what my initial platonic ideal of ramen was years back - hearty, creamy, satisfying, begging to be wolfed down. I love carefully sampling all the new developments and subtle soups the ramen world has to offer, but sometimes a back to basics bowl is best. Just be sure not to get snagged by the offers for massages that fly your way as soon as you step out the door.
Posted by Nate at 2:37 AM

will (hopefully) remember this post when i am next in kabukicho

Yeah Tonchin is so good, I went there alot within the month I was in Tokyo, I even had to go one last time before I had to fly out.

Oh my gosh, YES! Tonchin is perfection in a bowl!

I've been to the Ikebukuro and Kabukicho locations and I would say that the Ikebukuro honten is noticeably better. It's a bit hard to find, though.

Take the West exit from Ikebukuro station past the weird looking Koban. Continue up the main street crossing one signal until you get to the big Sumitomo bank where you should turn right. Continue down that street past the two Family Marts across from one another and turn left down the alley just past the Yoshinoya.

I recommend ordering the 得入り as well to get your chashu fix.

You know what, on second thought, it's the EAST exit. Yes, please don't take the west exit.

This looks like an ideal bowl of noodles. Thanks for the review!

By the way, if you're ever in Saku city in Nagano prefecture, check out Bunzoh (http://bunzoh.com/shop/index.html).