Let it be known far and wide that TETSU is one of thee premier tsukemen (dipping noodle) joints about town. Along with the veritable (and yet unvisited by me) imperial noodle powerhouse Rokurinsha, TETSU is widely reknowned as one of the top spots in Tokyo to get your dip on. The tsukemen boom that has resulted in near identical dipping noodle dishes at nearly every shop in the metropolis, but TETSU was one of the first and best of the 21st century tsukemenification movement, and the difference between the TETS and the rest is still clear. 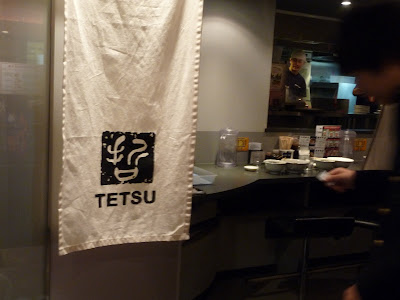 The original TETSU location is located in the Sendagi area, a quiet neighborhood not far from Ueno in northeastern Tokyo. It had long been on my hit list, but I had yet to bother braving the inevitable hour plus wait for my noodles. So, if you want a rundown on the original locale, be sure and check out Brian's post of a few months back. Since seizing success, TETSU has become a fixture in ramen roads and theme parks, and numerous venues offer these famous noodles, including the Shinagawa Shinatatsu zone, and my own neighborhood underground ramen food court, Kôenji Ramen Yokochô. 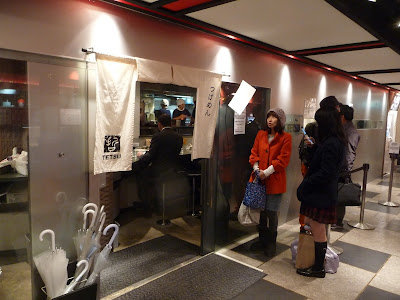 Kôenji Yokochô hosts some pretty stellar shops, like Môko Tanmen Nakamoto and Daiki, in addition to TETSU. Though the lines aren't as bad as the original locale, a wait is still certain, so it's not a spot for a quick lunch. 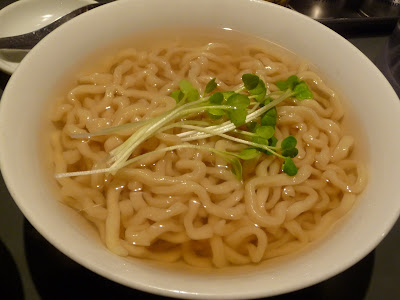 The most popular dish at TETSU is the "atsumori", which is standard tsukemen with the noodles served hot, rather than chilled. TETSU takes it a step further, leaving the noodles simmering in a light thin broth made of katsuo (bonito) stock, which not only keeps the noodles warm but adds another layer of flavor prior to dipping. 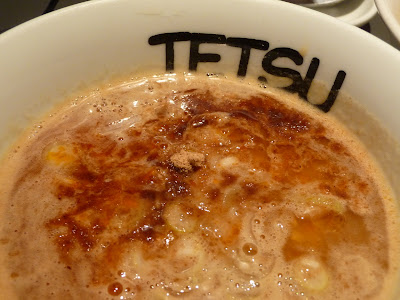 The soup, while at the deepest level based on the classic Taishôken tsukemen model of thick, vaguely fishy stock with a balance of sweet, salty, and vinegary, is it's own warthog. But yknow, much more delicious than a warthog. It's that much creamier, spicier, complexerer, and betterer than most likely literally any other tsukemen dipping brew I've ever tasted. And if you order the spicy dish like I did then it's that much spicier too. Just when I thought that every tsukemen was the same, TETSU comes along to do the same thing, just much much better.

After all, the kanji for TETSU may mean "philosophical knowledge" but the name is a homonym for "iron" and general badassery: 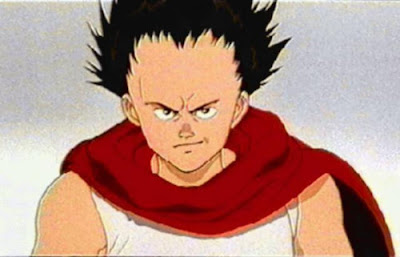 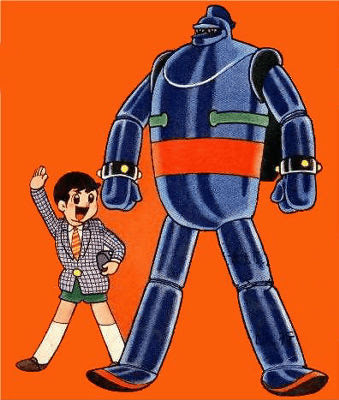 and of course TETSUJIN-28 (better known as Gigantor to US audiences)! 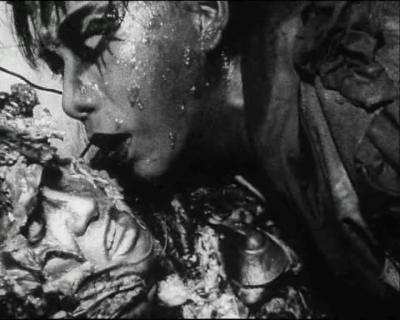 and then there's Tetsuo the Iron Man. None of whom are dudes to be messed with. Just like TETSU's noodles. 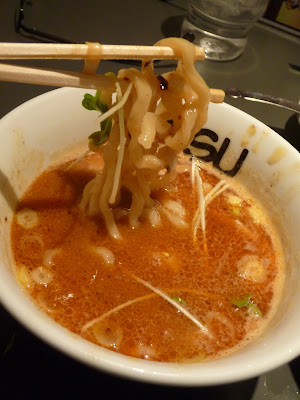 Lest I forget, I should also mention the total al dente perfection of the noodles, which are so so thick, so so curly, and so so good. I don't know if they are also coming from the famous Kaikarô factory in Asakusa, but they're at least as good. If you like thick noodles, then these are absolutely not to be missed. 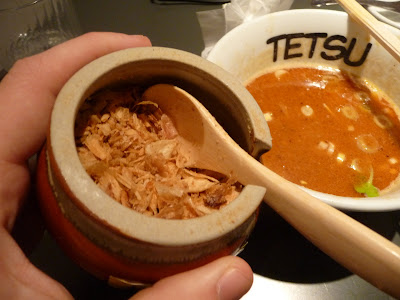 Then there's the table side fried garlic chips to make it all even deliciouserer. 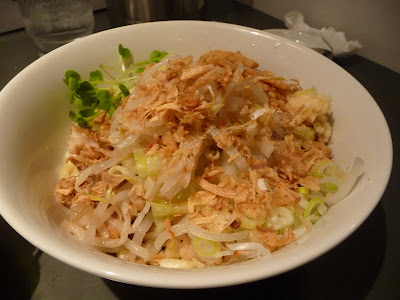 While I was gruzzling down on that with great gusto, my buddy A had ordered the abura soba, the soupless noodles. Abura soba translates as "oil noodles", which usually just means a bit of thick flavor essence to blend at the bottom of the bowl, but at TETSU, they take their oil seriously: 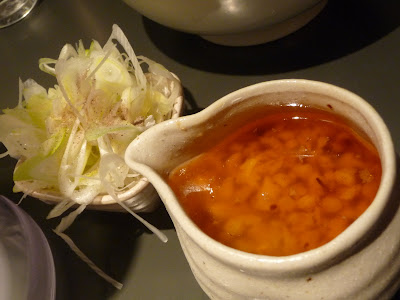 Yep, that's plenty of lard in oil with a raw egg tossed in for good measure. To be honest, as big of a hit as the tsukemen was, these boys fell flat. Abura soba shouldn't actually be all that oily, and should be packed with flavor, while these were almost too light in taste and a bit overly greasy. My homey A was not a fan, and I felt bad for having lead him astray. 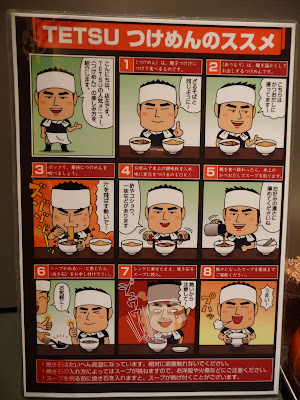 There is one more thing about eating at TETSU, a thing which probably played a large part in getting the shop remembered as the great boom took flight. Take a gander at your cartoon guide (is his name TETSU?) and... 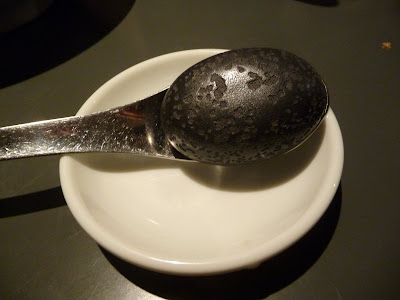 ...order a hot rock. Yep, call for that yaki-ishi, the baked stone. A lot of people complain that tsukemen gets lukewarm, and you can count Ramenate in that number. But when you've got a red hot rock handy... 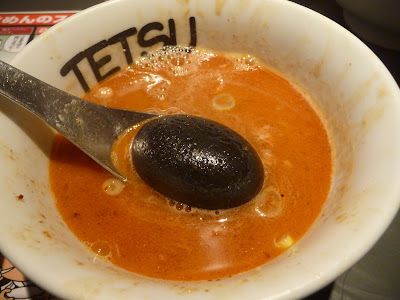 You can dip it in the soup to warm it right back up. Just be sure you've already diluted the broth down a bit with the tableside pitcher so as not to scorch the soup. I'm not a big fan of drinking down tsukemen broth, but if you haven't got the impression yet that TETSU is a bit of an exception, then I don't know what to tell you, dood. I can't say whether or not there's a great gap between this TETSU and the original, but I'd tell anyone travelling to Tokyo that if you want tsukemen this is a purty fab option.
Posted by Nate at 3:24 PM

nice entry! I recall the original shop at Sendagi to be just as good. It definitely ranks as one of my favorite tsukemen shops in town with its closest rival being "Kissou" in Kiba - good stuff too!

Thanks for this great info!

I just moved back to Tokyo and am living in Nezu (just down the street from the Sendagi location)....

Planning to check it out this evening -- maybe the perfect remedy for this cold & rainy weather!

@charles - yeah i'd like to make it to the original shop someday - no matter how good any branch shop is the original is always the best. and yeah, kissou is definitely on the list. brian from ramen adventures recently went and was raving about it.

@kevin - oh nice! nezu is a great part of town. there's a really chill shrine nearby, and lots of great strolling around yanaka too. let me know what you think after you've tasted tetsu!

It sounds pretty fucking delicious. I think if I was in the right mood (and level of gustatory preparedness) this would be a jam I could really get down with.

fell in love with this word "deliciouserer" :D

@ Nate - a bit delayed, but I've tried and loved Tetsu (I've been on a bit of a ramen binge the past week, and am thinking of hitting it again today)
Also, just had some serious oily miso at "Ramen Oyaji" in Machida (technically Tokyo, but nearly out by Atsugi in Kanagawa) -- I'm sure you've got many noodles ahead of you, but if you get a chance, I highly recommend it!