You may have already heard tell of this epic journey through the blog of Brian the Ramen Adventurer, but any good epic should be told by multiple narrators. Do you think a single guy went all the way around Greece telling the story of the Odyssey by himself? (this is a rhetorical question; that is a picture of Armand Assante as Odysseus).


The mission was simple, or so it seemed. Travel to the town of Higashi Omiya in neighboring Saitama Prefecture and eat at the famed shop Junk Garage. Which is sort of like the Tokyo equivalent of setting out from Troy to find your way back to Ithaca (Greece, not NY). Or heading out from Brooklyn to go eat in Secacus, NJ. Take your pick.

We made it 90 percent of the way, as far as Omiya, two stations away, when our Odyssean hunger struck a proverbial iceberg of train delays. All trains had ceased running on the line that links the two station, but we were unstymied by either technical difficulties or mixed metaphors and decided to weigh our options. 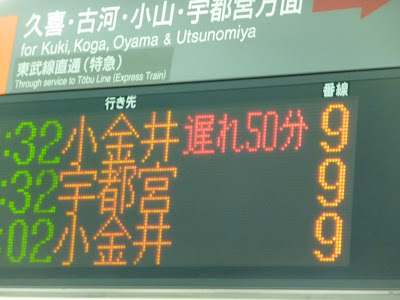 The next train - delayed 50 minutes. And that was an optimistic estimate. We never really did figure out what the issue was - midday train suicides generally don't take half that long to clear off the tracks. The station attendant put on her best forced "I feel your pain" grimace and told us that our only options would be to wait or to ride back from whence we came and take the bus. Or give up all together? 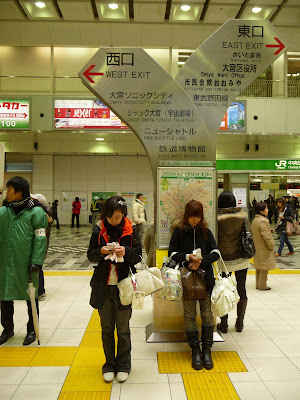 But did Ulysses give up when the Germans bombed Pearl Harbor? No! We would not be swayed from our quest to eat at a restaurant called "Junk Garage." We made the brave sacrifice of leaving the safety of the station to venture out into suburban Omiya. 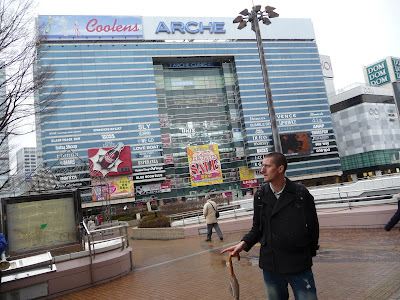 Surrounded by menacing colossi (or at least colossoid department stores), we overcame our panic to find the best possible way to kill a few hours - an emergency visit to the Japan Railways museum, conveniently located a 15 minute walk away. 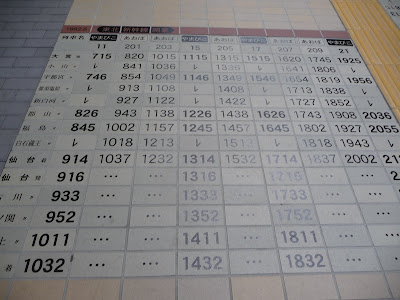 They say the road to hell is paved with good intentions. Fortunately, eating a bowl of oily ramen at a restaurant that sounds like an auto body shop in Long Beach does not count as a good intention. The road to the railway museum, however, is paved with stones bearing the express train schedules of yore. The irony was not lost on us. 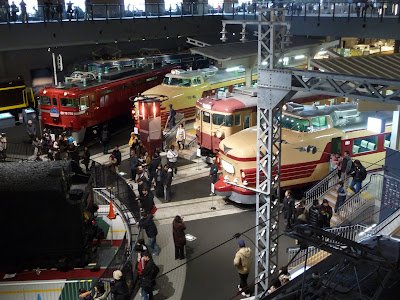 All sarcasm aside, the Japan Railways Museum is really pretty awesome. It just opened a year or two ago and is a cavernous structure packed with more train parts than you can shake a stick at and occupied by hundreds if not thousands of excited Y-chromosome bearers and approximately zero women unaccompanied by overzealous husbands, sons, and school children. 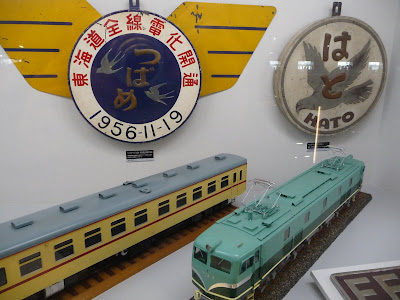 We ourselves being dudes, we easily spent two hours exploring the premises, thrilling to... 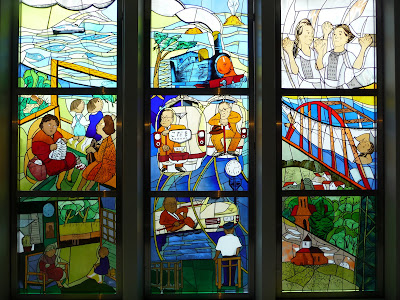 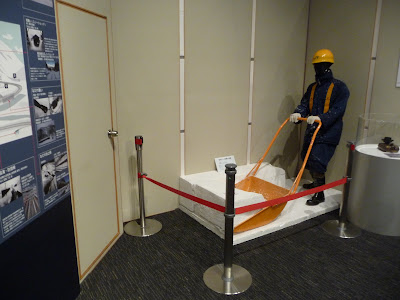 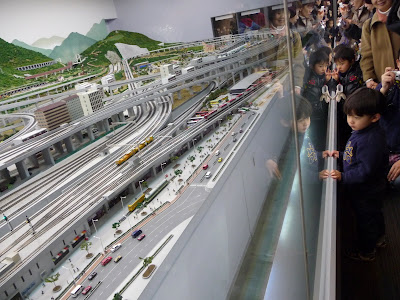 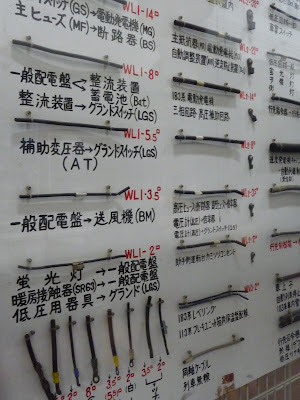 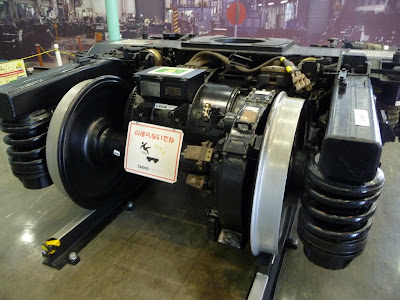 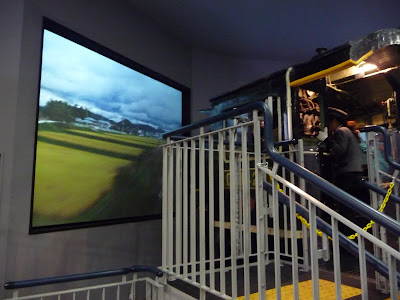 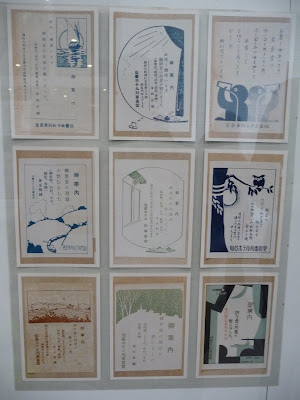 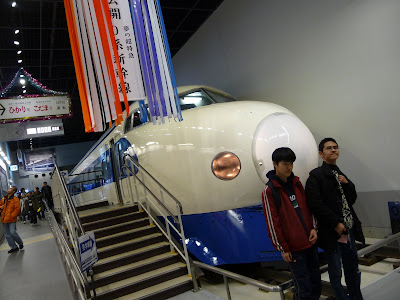 The first ever bullet train! 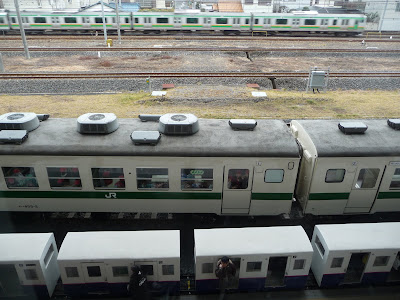 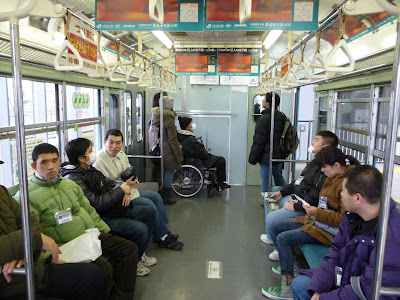 We hurried back and rode to Higashi Omiya without incident! Oh wait, no sorry, that's the inside of a display car at the museum, so you can pretend that you are riding the train that you actually rode on your way to the museum. 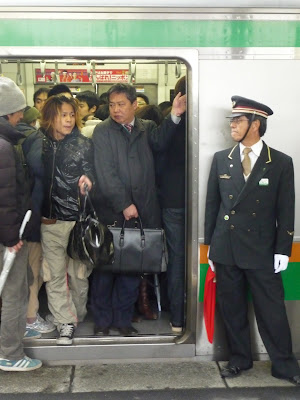 We made it back to Omiya station almost three hours later...just in time for the first train to take off in our direction. If it wasn't for a breakdown in railway service we might never have made it to the railway museum... 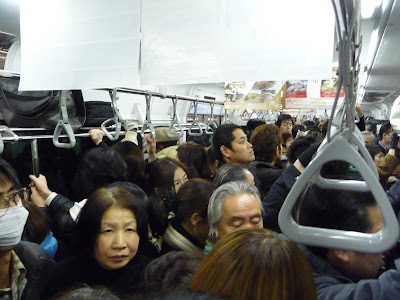 ...or gotten to mosh at midday. We had intended to be at Junk Garage before the door opened, but we ended up having to haul ass, just barely making it in 15 minutes before they closed for lunch. 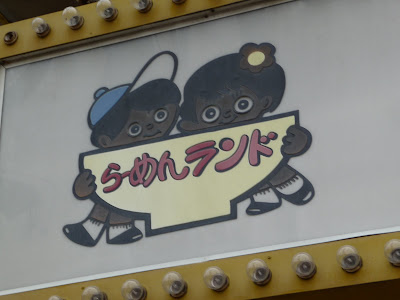 Here it is, Junk Garage! No, wait, sorry, that's the offensively caricatured ramen shop down the block. 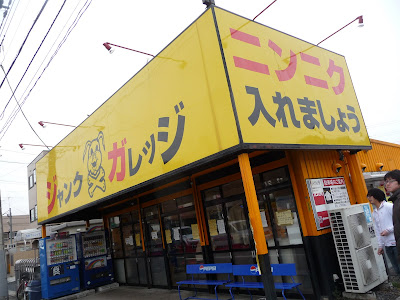 THIS is Junk Garage. The feeling of victory upon our ultimate arrival was almost worth all the delays and confusion. 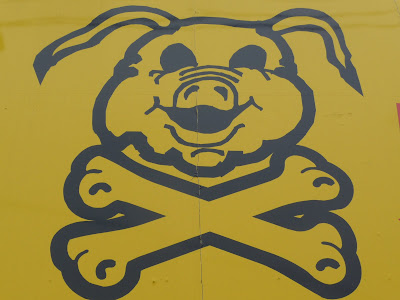 Where to even begin with Junk Garage? It's a part of the Rokurinsha group empire, one of the most powerful movers and shakers in the ramen world. Rokurinsha occupies the rank of most popular tsukemen (dipping noodle) shop in Tokyo (ergo the world?), and was one of the main shops to kick off the tsukemen boom we find ourselves in, as well as set up the recent tsukemen festival. Taishôken may be the tsukemen progenitor, but Rokurinsha is tsukemen for the 21st century, and Junk Garage counts itself among Roku's many progeny. Like Rokurinsha (and FUTO and Tasukiya, they use noodles from Asakusa Kaikarô, the thickest, chewiest, and curliest in town. 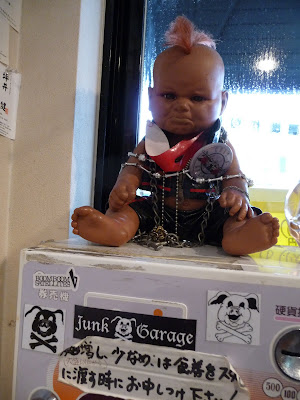 Inside, the vibe is all rock and roll, with metal blaring, band paraphenalia tacked up on nearly every wall, and an all around fun atmosphere. So fun, in fact, that we couldn't help but notice the huge hickey on the peroxide blonde waitress' neck. But what's the deal with Junk Garage noodles? What noodles best fit the Saitama-metal-hickeyed waitress-rock dude mode? 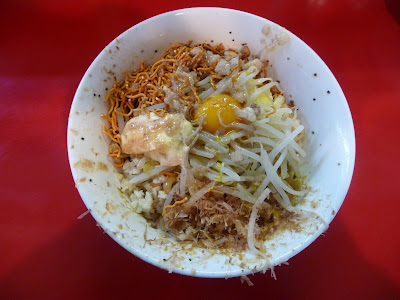 These ones, man. Junk Garage has single-handedly revolutionized the concept of abura soba / mazemen / shirunashi soba (soupless noodles), turning a simple bowl of noodles sitting in a bit of flavor essence oil into these heaving behemoths of carbohydrate. 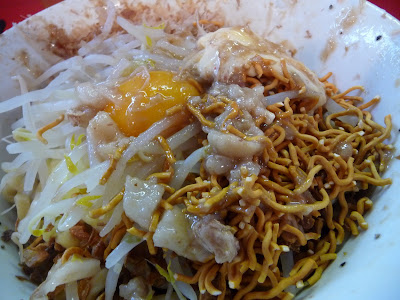 This rogues gallery includes, from the top - a raw egg, bean sprouts, cabbage, lard, shrimp mayonnaise, crunchy fried things, raw garlic, and dried fish. I've said it before, and I'll say it again - verily, this is the Japanese nachos. 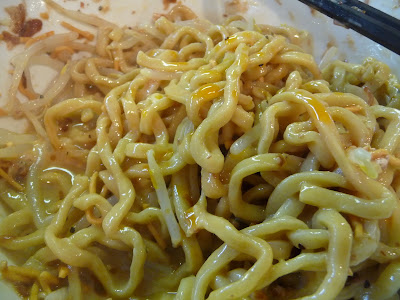 So mix it up real, real good. 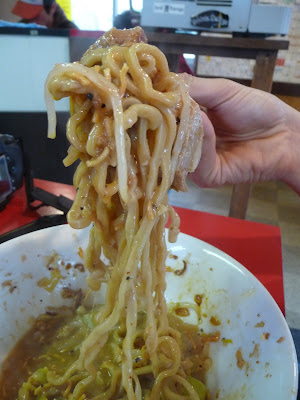 And take a big, big bite. It may look like the wrong end of a hangover, but trust me, it is extremely delicious. Remember, this place is called Junk Garage after all. It is our Penelope. With one bite all the pain of the long journey instantly vanished. Salty, savory, chewy, crunchy, and more, Junk Garage's tokusei mazemen (special mixed noodles) are a big mess of taste sensation well worth the trip. Just in case you want soup with your noodles, the ramen at Junk is also comically over the top, featuring Jirô style piles of veggies and lard stacked as high as the rest of the bowl combined.

At this point, you are either totally disgusted or shamelessly salivating. Junk Garage is not for everyone, but if you like a good calorie bomb to your arteries now and then, then this is the place for you. I'm willing to bet it would be even better after a few beers....
Posted by Nate at 2:07 PM

You've outdone yourself with this excellent posting. Thanks very much for the great photos and witty prose. Keep it up!

This was one of your best posts ever. I'm drunk though, if that means anything.

And, yeah, this place was awesome-

@ anonymous - thanks! the better the bowl, the more inspired i am to really give it a fun write up. junk garage made it easy.

@cphai - glad to know there are some fellow junk food junkies in the fold!

@brian - thanks man! definitely one of the all time great ramen adventures. enjoy your time in drunk garage!

this was actually the night time menu of 六厘舎 if i'm not wrong. I had it in osaki once in 六厘舎 and i absolutely loved it, much more than 六厘舎つけめん.

@brandon - oh man, you ate at the original junk garage, awesome. i didn't realize that it started out as roku's night menu. we still need to grab a bowl sometime! i'm in the states visiting family, but let's meet up after i get back in early april.