We were pretty lost. Pretty prettttttty preeeeeettttttttty turned around. Wandering through the back streets between Hatagaya and Hatsudai stations in the western suburbs, Keizo, Brian and I felt like we were going in circles through the little known neighborhood of Honmachi, tucked away just out of sight of the freeway. 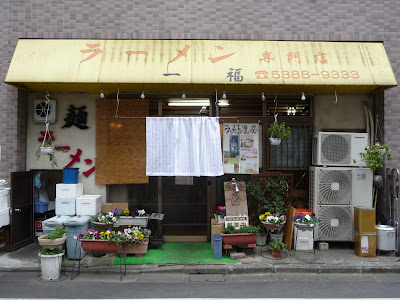 Having already attained copies of all the ramen guides currently on the market, I had scored a few out of print mags at a used bookshop, so we took a little time travel back to the recent past of 2006 to try and seek out some new spots. Our eyes landed on Ichifuku, which looks like your neighborhood ramen shop. And it is. But it's much more than just that. 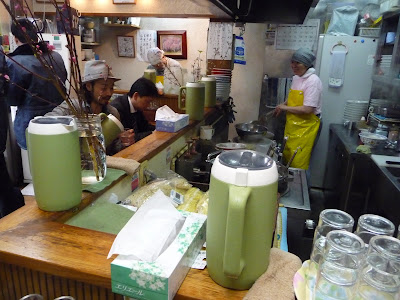 Run by not-so-little old lady Ishida Kumiko, Ichifuku celebrates twenty years in business this fall. The inside was cozy and decorated with fresh plum blossoms and faded magazine postings; many of the customers seemed to be regulars, which isn't surprising, as there is essentially zero chance of finding the shop just walking by. 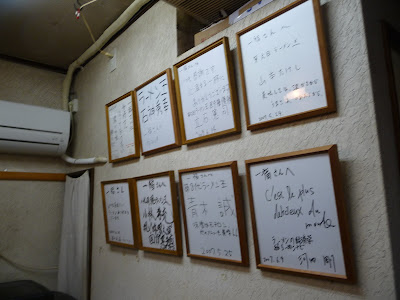 But numbering among those regulars is a certain Ishigami Hideyuki, one of the main mover and shaker ramen critics today. "The man with the tongue of a god," Ishigami gained fame about a decade ago by winning a taste test to become the Ramen "TV Champion", catapulting to instant (relative) fame. Any shop he deems worthy of pantheonic status has its future essentially assured. 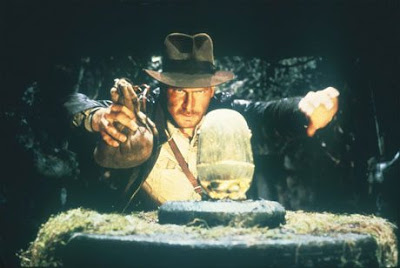 Over the years, Ichifuku has been visited by not just Ishigami, but nearly every generation of TV Champion Ramen King, making it a secret pilgrimage spot for each who takes on the crown. And now we were here. Just sayin'. 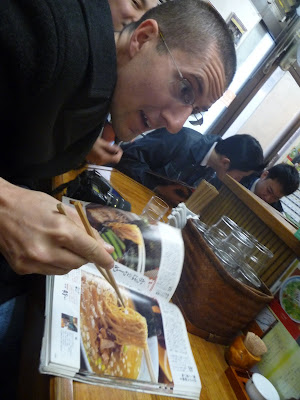 We flipped through some vintage magazines, including the much sought-after guide written by Shinasoba-ya master Sano Minoru. With hunger panging away, Brian tried to eat the noodles straight out of the magazine, but to little avail. 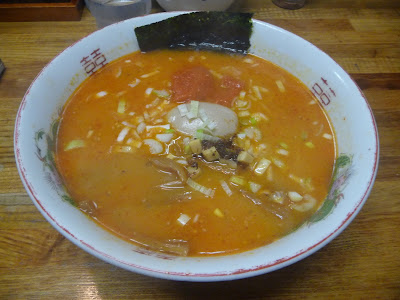 I ordered the spicy miso ramen, a nearly bright orange broth with a big dab of Korean-style tobanjan (spicy chili miso paste) on top. Thin and relatively simple,this is neighborhood-style miso ramen from before the boom, lacking much influence from the Sapporo Sumire / Junren tradition, or the flash and pizazz of the post-Kururi era. Diced onions, bamboo shoots, and mysterious little crunchy things round out the bowl. Keizo tried to ask as to the nature of these little croutons that never got soggy, but Ishida-san responded with a coy "hmm, I wonder what they might be..." Who says old ladies don't have secret weapons? 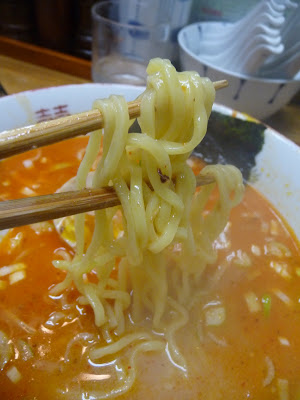 The noodles were thick, fairly straight, and tasty. And the soy poached egg was absolutely bursting with flavor. Overall a tasty enough bowl, but to be perfectly honest a bit salty and not so special. So what's the big deal with this place? 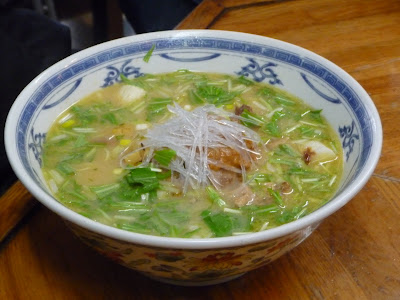 This is the big deal. Keizo was smart enough to order Ichifuku's famous Irori (hearth-style) noodles, which is unlike any other bowl of ramen any of us had ever seen. In addition to the standard pork, chicken, and seaweed, blonde miso, sake lees, and soy milk go into the soup. It's all topped off with fresh mizuna greens, diced pork, and um, shark cartilage. "It sounds like old people Chinese medicine," Brian remarked. But it tasted real, real nice. 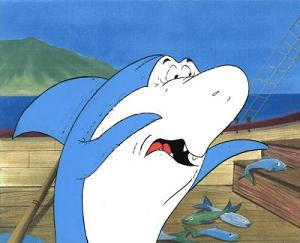 I was a bit scared off, having had a bad experience once with shark cartilage. But one sip made me wish I could drink this every day. More than ramen, this tasted like a fancy traditional dish that might be served in a countryside inn that just happened to have manifested itself in the form of ramen. Absolutely delicious. In addition to the Irori noodles, Ichifuku also has a rotating menu of other interesting items, like plum-flavored tsukemen (dipping noodles), curry ramen, and so forth. Essentially, this is what highly experimental ramen looked like 20 years ago, and it stands the test of time admirably.
Posted by Nate at 2:24 PM

Once again, very well written to the point that it's making me itch for more noodles.

I'll be in Taipei next month. Would you know of any ramen house worth visiting?

i've said it before, i'll say it again, it's easy to write about good noodles. i haven't been to taipei in 7 or 8 years, so don't really know any noodle joints, but i'm guessing that it's hard to go wrong. though, i think that domestic style taiwanese noodle bowls may end up being better than attempts to produce japanese ramen, which tends to be a bit milder with softer noodles. i'd love to hear if you find anything good though!

Are any of you going to visit another ramen shop this week? I'm in Asakusa at the Khaosan Annex. Yes, Bassanova is on my list. Send an e-mail or mention to me on Twitter (pudgym29).