I think Keizo beat me to the punch with this pun, but I can't think of a better corny line, so I'm gonna use it too - this bowl is all about the Notorious Bi.Gi.Ya.

It was all a dream/ I like to read ramen magazines / slurpin' bowls up in the limousine / hangin' pictures on my blog / every wednesday noodle attack eating bowls with my doggs / I let my mouth rock cause I can't stop / eatin' ramen, drinkin' beer, sippin' on fish stock / way back, when i had the red and black lumberjack / with soup stains to match. 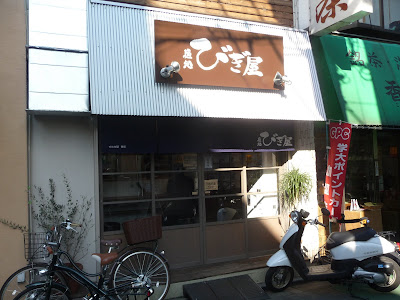 Which is another way of telling you that Keizo, Brian, and I found ourselves in the Gakugei Daigaku neighborhood, about to eat at Bigiya on one of our regular ramen dude dates. 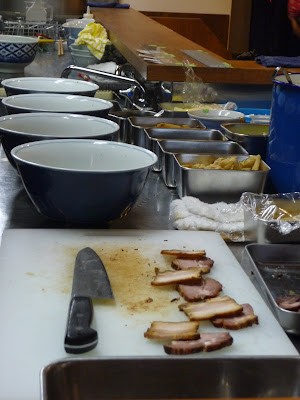 A bartender at one of Keizo's regular haunts (am I getting this right?) tipped us off to Bigiya, saying his friend had just opened up shop in the south part of town. The shop has gotten some good notices, and been featured in a number of magazines and other media mouthpieces since opening a number of months back. 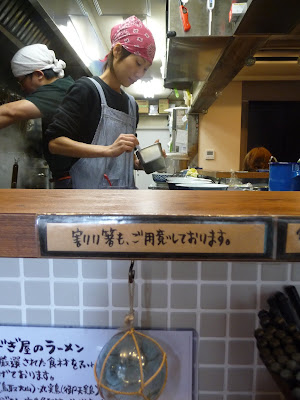 Bigiya is pretty much your standard above average new school ramen shop - comfortable and clean but not quite fancy interior, friendly atmosphere... 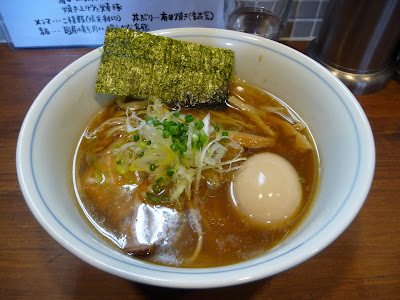 ...and of course the industry standard of dark brown soup made from blended fish, pork, and chicken stock. Shops like Menya Musashi (post coming soon!) pioneered this kind of ramen about 15 years ago, and it's become to our age what standard shôyu was to the postwar Tokyo ramen world. This is basically shôyu ramen for the 21st century. 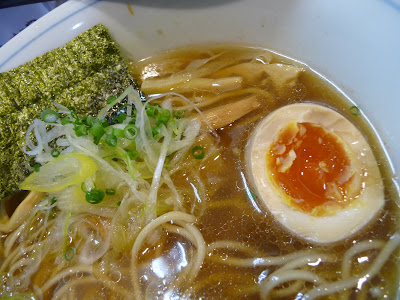 Some shops do it a bit thicker, some a bit thinner, but each one puts their own spin and take on what is more or less a model at this point. I'd put Bigiya pretty firmly in that category, which doesn't mean it was a bad bowl at all. There was nothing to push it into the highly memorable category, but to their credit they also don't go for any gimmicks, instead focus on execution, with a soy-infused egg second to none, extra fresh bamboo shoots, and an overall impression of effort. 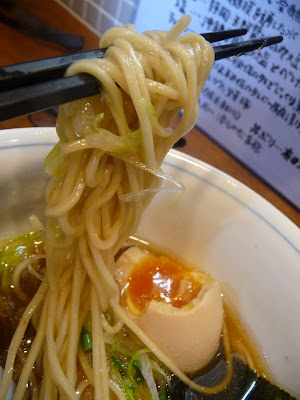 The noodles are moderately thick, moderately straight, and perfectly acceptable. I don't know if they use industry standard Mikawaya Seimen or another sourcer. Apparently each ingredient is individually sourced, with chicken from Tottori, soy sauce from Shizuoka, and sea salt from Okinawa. All in all a solid bowl, but we were still hungry for more...but it's alllll good.
Posted by Nate at 1:21 AM