知りたいでしょ、がんこラーメンの内観 (You're Probably Curious to see the Inside of Ganko Ramen, huh?) 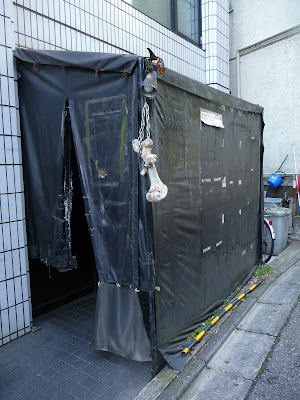 You've seen a photo of that mysterious black tarp, so now would you like to see the inside? I first heard about Ganko from an administrator at Waseda University, who asked me if I had been to the "all black ramen shop with no sign." Intrigued by the challenge, I set off on a quest of discovery, only to find the shop just a few hundred meters from my own place of dwelling. Of course. I never forgot that bowl, but had been to busy banging down new bowls to make it back. Until I found myself escorting NYT photographer Basil Childers there to shoot the story. 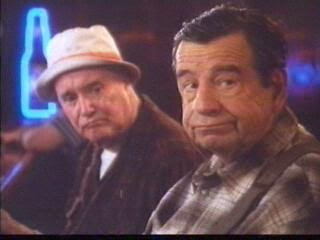 If you do go to Ganko, please try and keep it low key. It's a tiny shop with only 4 or 5 seats that eschews most PR and is run by a single old man, so showing up in gaggles and talking loudly would be bad form. Ganko does mean "grumpy" after all, so please tread lightly and slurp softly so this particular ganko old man doesn't regret giving us permission to publicize his shop. At one point, Ganko was a "member's only" ramen shop (no, seriously!), so let's hope he stays public. 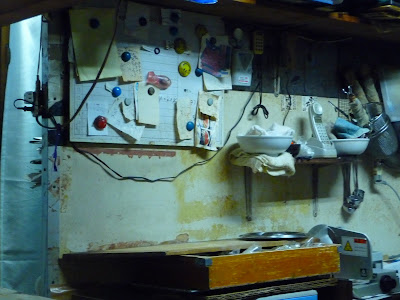 Pull back the tarp and step into a narrow, cluttered room that feels more like a 1970s countryside kitchen than a famous restaurant in one of Tokyo's more bustling districts. 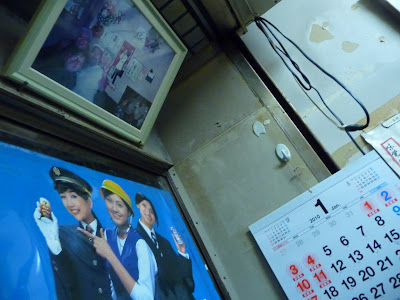 The walls are covered with yellowed clippings, old posters, and, in a hallowed place above the door, a photo of the smiling Ichijô Yasuyuki, the original Ganko old man and head cook. Ichijô founded the first Ganko location down the block from this shop about 20 years ago, never putting up a sign, using only the trademark cow bone to show the location of the hidden door. After several location changes, Ichijô, a perpetual ramen drifter, has moved on to other things, but his visage smiles down on every bowl to this day. For a more detailed description of the Ichijô legend, check out this post. 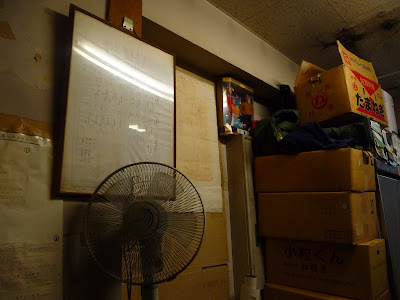 There are now several dozen Ganko locations around the country, though mostly concentrated in northwestern Tokyo. That poster behind the broken fan, next to the boxes of flour, to the left of the Star Trek barbie dolls, is the Ganko extended family tree, detailing each generation and location, as former pupils have gone own to open their own Ganko shops. This tarp is the symbolic and spiritual head shop, the one which has inherited the most direct lineage of Ichijô. 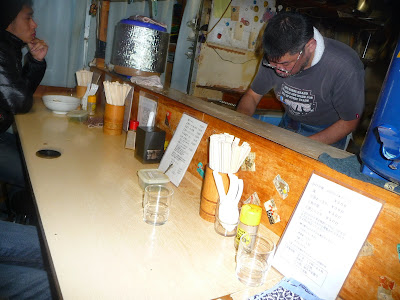 Sit at the counter, drink it all in, and tell the unsmiling chef what you want. There's shio (salt) ramen, shôyu (soy sauce) ramen available with three degrees of fat drizzled on top - assari (thin), chûkan (medium), and kotteri (extra lardy). My personal recommendation is the ebi abura shio ramen - the salt ramen topped with a layer of piping hot shrimp oil. 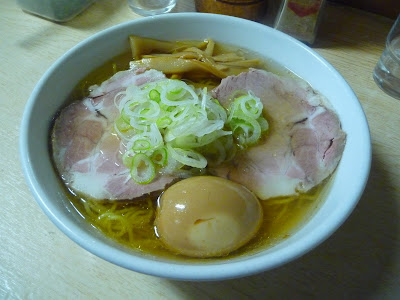 And here's the bowl you've been hearing about. It looks so spartan, so simple, but Ramen Adventurer Brian calls it the "best in Baba", and hey it must be good, it was featured in the New York Times! Ganko strictly abides by the three guiding principles of ramen, as laid out by Ichijô Yasuyuki himself: 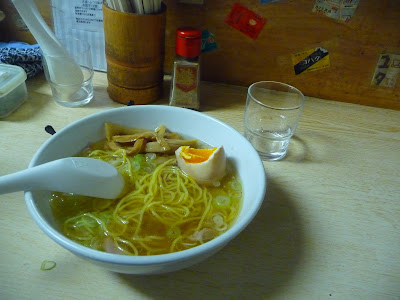 I'm happy to report that these principles are firmly followed for every bowl. Ganko's ramen's most famous characteristic is it's "shoppai" quality, an almost sour saltiness that divides ramen fans into "love it" and "hate it" camps. That said, I've yet to meet a hater, and we all slurped in supreme satisfaction. The shrimp oil really takes it to the next level, making this deceptively straightforward bowl into something else altogether. 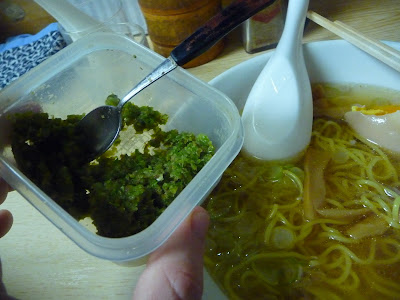 When you've finished half your bowl, grab the little tupperware container of minced green hot chilis and tap in a spoonful to change the taste of the soup yet again. The spice factor goes great with the astringent acidity of the thin oily soup. And of course I'd be remiss if I didn't mention how firm and tasty these noodles are. Thin and yellow, they look like the crappy mass-produced stuff. But appearances can be deceiving - remember how you're eating inside a tarp? I'm not sure which is more dazzling, the taste of the soup or the bright sunlight once you step back outside from this "ramen wonderland." Anyone been to any other Ganko branches around town?
Posted by Nate at 11:43 PM

You know, I do not especially like ramen (the slurping and such drive me nuts fast), but you certainly make it tempting.....

Thanks for the report on the Ganko's inside. I really was curious to see it! Well, the inside doesn't look very fancy, but the ramen does look very tasty! I really need to go there sometime soon and try that out myself.

Interesting looking place. It looks more like someone's "workshop" than a restaurant. Thanks for the peek inside!

hey guys, sorry not to have noticed these comments earlier and left you hanging!

@david h - you learn to love the slurping. after a while it sounds like pure enjoyment transformed into sound.

@tomoko - ganko's got more charm in one corner than most fancy places have in a building. and yeah, its great. i also recently visited a ganko branch in ikebukuro (post coming soon!) which was almost as fabulous (and just as small)!

@edjusted - yeah, ganko is an unsung underground champion of tokyo ramen, no doubt.

Hey, you mentioned that this original shop is closed in 2011. Right? I just wanna be sure before I go hunting for a black tarp & hanging bone.

After a night of drinking until around 5am, wife and I trudged hung over through the cold, rainy, and surprisingly residential streets to get here, and it did not disappoint. Can't wait to go back.