Properly scouring the metropolis for the most properly proper ramen shops can be a properly time consuming job. If you do it properly, that is. The noodle in one's head becomes overwhelmed with a glut of noodle shop names as numerous as the globules of fat in a bowl of Tsubame ramen. There are web databases, magazines, TV shows, books, email tips, recommendations from friends, recommendations from teachers, recommendations from faithful blog readers... But the problem with food media (as most mass media) in Japan, is that hardly anyone is inclined to say anyone bad about anything. By virtue of appearing in a magazine at all, a shop is certain to get nothing but praise, even if, well, it sucks. Which makes the investigative eater's job that much harder. I try not to chase down every praise-blown shop in the glossy new mags, but sometimes, well, those shops downright rule. 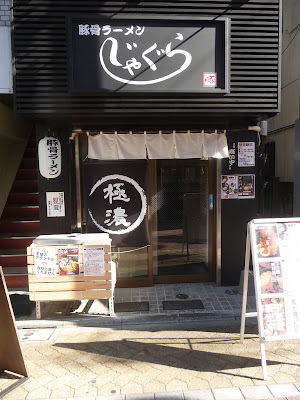 Included in this happy number of newly opened shops that actually deserve the breathless praise they get is Jagura, located on along the shopping street just north of the Shin-Kôenji subway station. My bluesman buddy Junior Ken and I had our sights set on a different shop, but an unexpected closure took us to Jagura, seduced by the signage signaling the most salubrious slurp in south Kôenji. 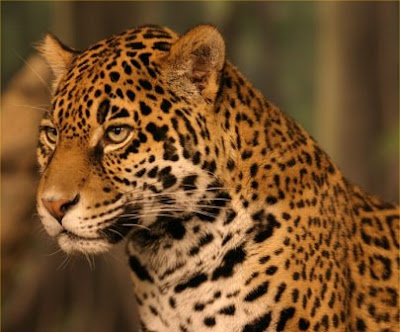 Just what on earth does Jagura mean anyways? Jaguar? 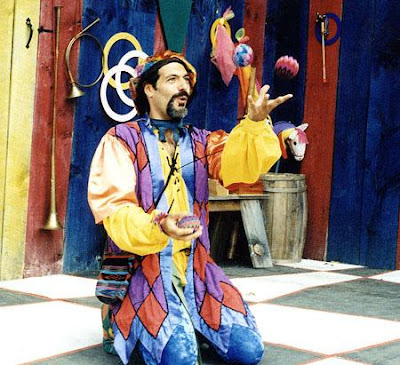 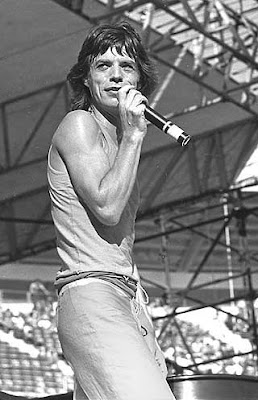 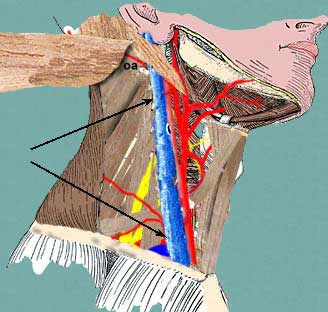 Jugular? I think I'm gonna go ahead and call it for jugular, because your jugular is the only vein in your body that will be left unclogged after supping on this thick sludge of a soup made from boiled down pork bones.

Jugular is one of the shops subscribing to the current trend of chônôkô (super thick) or gokunôkô (mega thick) soup that can barely still be called liquid. The gooey soup trend has become so intense in recent months that some ramen critics have been known to bring their viscosity-measureometers to shops to measure the viscosity of the broth. The meter readings are naturally prominently featured in magazine articles highlighting the gooeyness of each shop's soup. 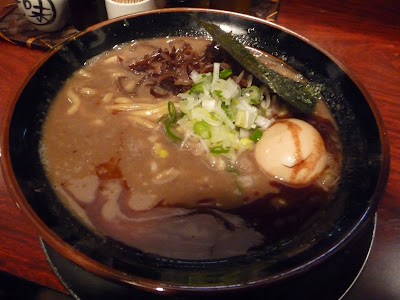 It may look like sewage, but it tastes like heaven. I'd eaten extra thick soup at Misoya Ringodô, but this takes the cake, and probably has about as many fat calories. It's like a bowl of Kumamoto ramen on steroids - a sweet, mild and not too stinky tonkotsu (pork bone) soup topped with kikurage (wood ear mushroom) slices and a healthy (or not so healthy, depending on how you look at it) helping of black burnt garlic oil. Then take the whole thing and increase by a geometric factor to get this delicious dish. 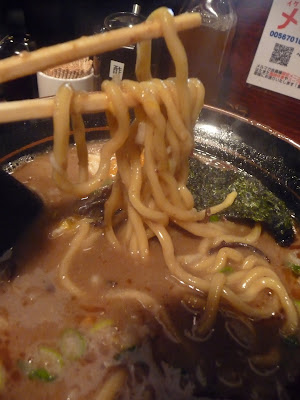 The noodles are extra thick too - thin straight noodles would likely collapse under the sheer weight of this soup. If you like your ramen rich, then this is for you - lots of chew drowning in a bowl of porky gruel. 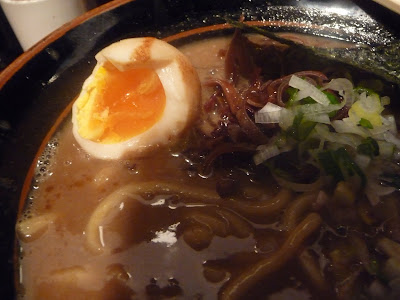 The soup shares some similarities with the recently reborn FUTO, in that it's surprisingly sweet and perfumed with just a hint of shellfish broth to temper the pure pork base.

Like Curtis Mayfield sings, you have a "choice of colors." So which one would you choose, my brother? In addition to the black, which is topped with black mâyu (sesame oil with scorched garlic), there's also the red, featuring spicy chili oil, and the brown, which Junior Ken ordered, in which the oil is made from fish broth, adding to the oceany flavor. 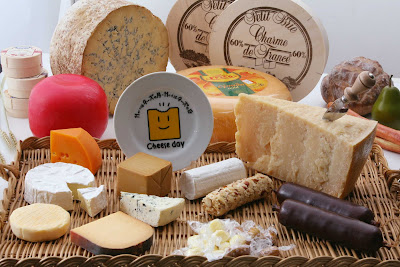 In case that's not enough of a calorie bomb for ya, Jagura also offers a triple cheese topping - parmesan, cheddar, and cream cheese. But you've got to be one of the first 10 heads to order beginning at 5:30 PM, or else your arteries will stay blissfully unclogged. Limited time, limited number menu items are definitely one way to get customers in the door at slow hours. I'll try that one next time. 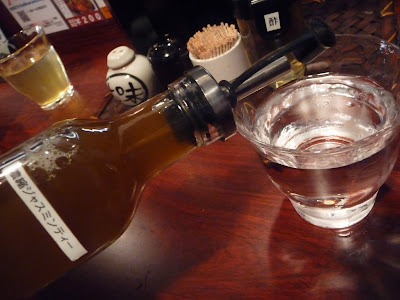 Fortunately, the Jagura team is thoughtful enough to keep you from walking out with putrid breath and a limp tongue. Each seat has a small decanter of concentrated jasmine tea - add a few drops to your water and feel instantly refreshed. 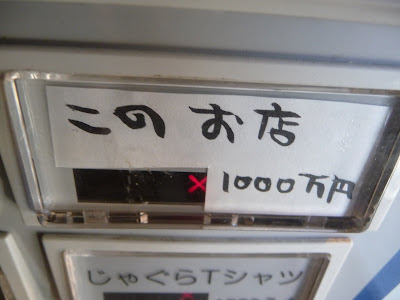 Oh yeah, there's one more item on the menu - the shop itself! Only 10 million yen (about $100,000 dollars) will buy you Jagura itself...too bad that item is already sold out. But that's OK, I think the present team is doing just fine the way things are. This was a good one, kids!
Posted by Nate at 11:09 PM

SOLD! I wonder if we have something similar here in Los Angeles? Looks so good!

if you ever find something that comes even close, you must let the world know at once!

I discovered this shop in my trip to Tokyo last April, and so far still hasn't found any ramen that comes close!