Obviously, I've spent some time in Japan. And if you've read some of the older posts I put up, you know that I've spent some time in China as well. But for all my pan-Pacific panderings, I had never been to Korea before, until last week. It was a pretty wild trip, one that involved fake electric chairs, humans in raccoon costumes, 1960s psych rock rarities, post-apocalyptic islands, piles of dead monkfish, heated floors, beached North Korean submarines, and, uh, too much rotgut soju alcohol. Oh right, plus RAMYUN! 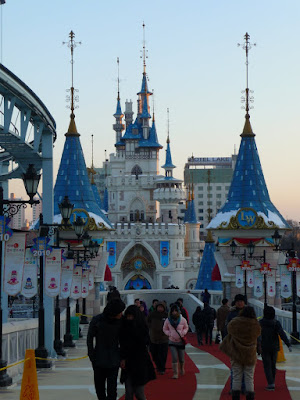 On my first day in Seoul, I fulfilled a lifelong dream - to go to Lotte World. Like Korean Disneyland but less so, Lotte World is a place I had wanted to visit since I was seven years old and a girl in my 2nd grade class stood up to give her summer vacation report and said: "This summer, I went to South Korea to see my family. We went to Lotte World. It was awesome." And last week, Lotte World (you may know the Lotte corporation from their moderately popular hamburger chain Lotteria) made one man's dreams come true. The only thing that could make the day better was...do I even need to say it? 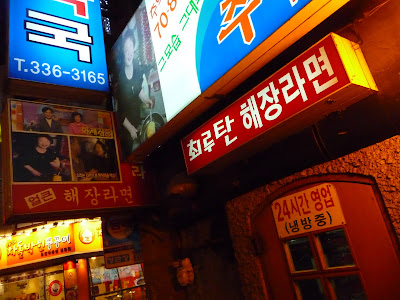 There are actually tons of places to get Japanese-style ramen in Seoul. It's definitely hot right now, and new ramen places are opening up all the time. I thought about trying out the Korean take on my favorite J-noodles, but deterred by bad memories of would-be ramen in mainland China, decided to take a pass. I wanted noodles how they do in the K - I wanted ramyun! Forunately, my pal A knew just where to take me. Open 24 hours, this place in Seoul's Sinchon district is known locally as "hangover ramen" since it's mega spice quotient is supposed to bust even the toughest day after blues. 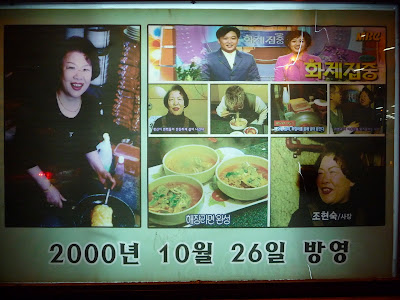 I don't know if the proprietress herself runs the ship all 24 hours, but I didn't see anyone else around. I wouldn't be surprised if she sleeps in the room behind the shop - she hasn't looked as young or thin as in this photo in quite some time, methinks. 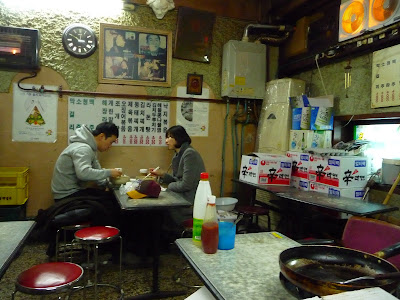 I don't want to ruffle the feathers of any Korean readers, but I couldn't help shake the feeling that so much in Korea reminded me of either Japan or China. This shop was firmly in the China column, with that great local hole in the wall noodle haunt atmosphere a far cry from the chic counters in Japan. See the pan on the right side of the photo? That's half the kitchen... 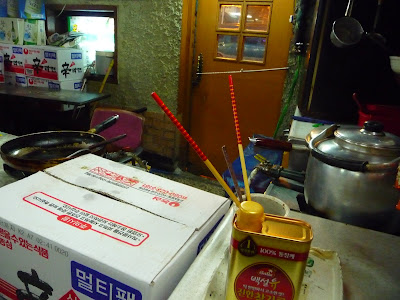 ...and this is the other half. What kind of ramyun can one cook on this little counter top? 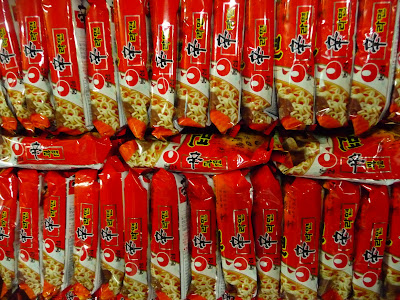 The instant kind! Yep, "ramyun" is about as far from "jikaseimen" (homemade noodles) as you can get. A strong contender for Korean national dish, the spicy Shin Ramyun and its dehydrated brick of noodles are what goes into every bowl. Now, I love Shin Ramyun, and it's probably thanks to the stuff that I ended up the noodle freak I am now. But you're probably wondering - why go to a restaurant to eat instant noodles? I thought we finally had reached a time where people realized that ramen was so much more than the dry stuff? Because no one you know can trick out and transform a bowl of instant noodles like this. 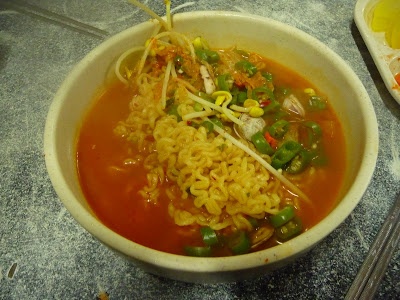 The not-so-little old lady stirs up the soup then tosses in some clams, bean sprouts, kimchi, maybe a bit of lard, plenty of spices...and lots and lots and lots of sliced green chilis. My pal A was taken with trepidation before deciding to take the plunge into this atomic bowl. 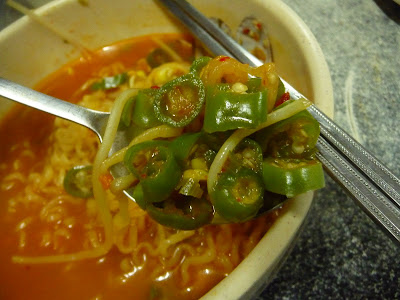 On a cold winter's day, not much else can warm your insides like a piping hot bowl of soup stuffed with capsaicin. On the whole, my experience was that Korean food wasn't *that* spicy, but this soup was an exception. Definitely the spiciest thing I'd had in a while, though perhaps not achieving the pure pain and punishment of the "cosmic" miso ramen at Yagura-tei. 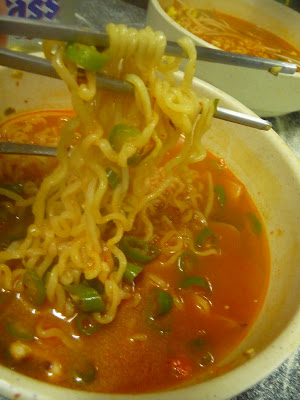 And the noodles? Scoff away, but these were boiled just right, not too soft, not too hard. They may not be fresh off the noodle machine, but they have the added benefit of hitting that nostalgic comfort foot pleasure receptor deep in the brian. Ivan Ramen may make some of the best noodles I've ever had, but I didn't eat Ivan's noodles 3 times a week when I was 11 years old. 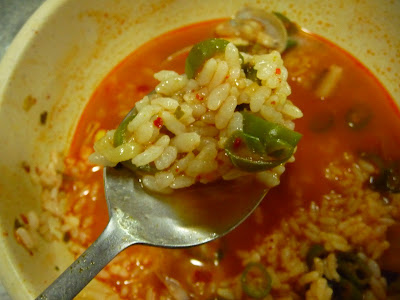 These nameless noodles were so good that I called for a bowl of rice to dump in and polish off the rest of the spicy broth, chomping almost every last pepper. I feared for the safety of my lower half, but don't worry, these noodles never made it all the way down to my GI tract... 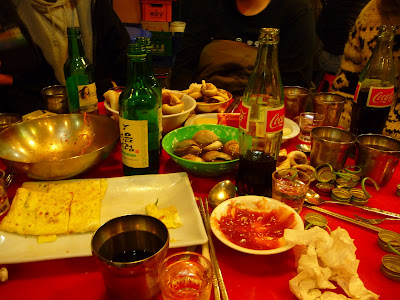 Too bad these noodles can't cure a hangover you haven't gotten yet!

Awesome post Nate! My sister who spent a year as an exchange student there told me about some urban legend college ramyun stories.

ramyun urban legends! what are they? fanciful tales of day-after headaches banished by ramen? even older ladies cooking even spicier bowls in even scrummier kitchens?

Haha.. One was about a college kid who died of malnutrition because that was all he ate!

If you are still in Korea, there is an excellent (and trendy looking!) ramyun place called Tanpopo in Jeongja-dong in Bundang, a satellite city of Seoul. Full of rich broth, fresh noodles, and slow cooked runny egg. Best ramyun I've had in Korea thus far.

can't say I remember having any really great ramyun while I was there in Korea, but you should try budaechigae (army stew) and ask to add ramyun to it (a standard). It's delicious, not technically ramyun but definitely worthy.

@shoan yin - im back in japan now, but ill pass along your recommendation to my friends in seoul!

@alex - shoot, wish i had known about that stuff a couple weeks ago, it sounds great!

I actually read that as "When I was 7 years old and a girl".
Good to see you enjoyed Korea. That ramyun looks vicious.

@Peter I. - trust me, i was at least as happy as a 7 year old girl! korea was great, and the ramyun in question wasnt nearly as vicious as the ensuing hangover...

very interesting information, I really like it because it can add insight for me more broadly, thank you very much for this extraordinary information
Obat Benjolan Di Pipi Atau Wajah Tanpa Operasi,