Now that the end of the year is upon us, all the major publishers are releasing their noodle guides for the coming year, telling us what shops we should eat at in 2010. I've picked up a bunch of new mags in just the last month or so, which means a bevy of new places on the hit list, as well as a reminder of the ongoing process of separating the wheat from the chaff, since with an average of one shop opening a day in the Tokyo area and no shortage of breathless overblown praise for almost every new bowl, it takes a lot of effort to find the truly delicious places. 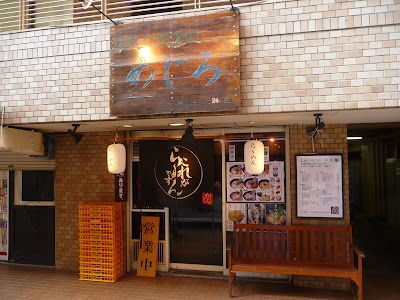 Recently I've been feeling a little sick of trying to chase the trend tail, always eating at shops only a few months old. So this time around I picked one out that had a bit of a history - Nanae no Aji (Seven Layers of Flavor) Mejiro opened back in 1993, which makes it a veritable dinosaur in the fast-paced ramen world. Oriinally opening in Fujisawa city in neighboring Kanagawa Prefecture, Mejiro moved to central Tokyo in 2004. But don't let the name fool you - it isn't located in Mejiro, but a few stops down the Yamanote Loop line in Yoyogi. 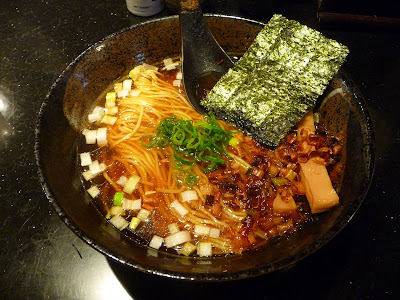 What Mejiro offers is a simple straightforward bowl operating in the model of Shina Sobaya. Ramen Demon Sano Minoru's original high end but barebones bowl revolutionized the ramen world by elevating the noodle to gourmet status, and Mejiro seems to be going for something similar, with carefully layed straight noodles sitting in a thin shôyu broth, not unlike those at Sano's Shina Sobaya. Beauty in minimalism, no? 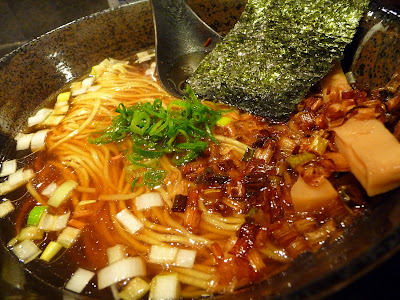 I'm a bit more of a flavor maximalist, so I topped my bowl off with an order of sliced carmelized onions. While Keizo might think that carmelized onions are better off on an In-N-Out Animal Style cheeseburger, I'm sad to say that they were probably the best thing about Mejiro's bowl. While the onions had plenty of smoky sweetness, the soup itself was so minimalist as to be almost weak and watery tasting, easily overpowered by the onions. This was clearly a carefully devised broth, yet my tonkotsu (pork bone)-tinged pallette left me a bit unsatisfied. 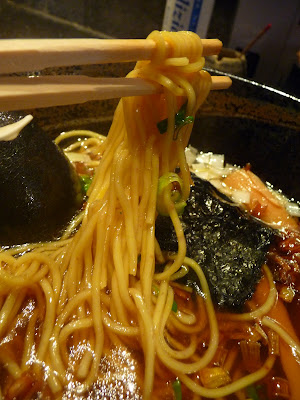 The noodles are homemade and do a nice job absorbing the soup while staying firm and toothsome, but in the end I felt a bit underwhelmed by Mejiro's bowl. The soup, made of chicken, pork, konbu seaweed, sardines, and spanish mackerel is clearly carefully crafted, but it just didn't have enough punch for me. Not a bad bowl by any means, but I was expecting something more from a shop that's been called one of the "Four Heavenly Kings of Yamanote Line Ramen."

I guess sometimes you've got to rock it like Chuck D and be careful what you eat.
Posted by Nate at 11:30 PM

hey don't misquote me! haha. i have no problem with caramelized onions in ramen. it's the raw ones remember! dude in-n-out sounds so good right now.