My neighborhood of Arai Yakushi isn't exactly known as a ramen mecca. In fact, it isn't exactly known at all, considering how many confused looks I get when I tell people where I live. But if you take a look around, we've got a good little grip of solid shops - the original location of tomato ramen RYOMA, a branch of Ganko, the storied station-front shop Yakushi Ôban, and a couple more. 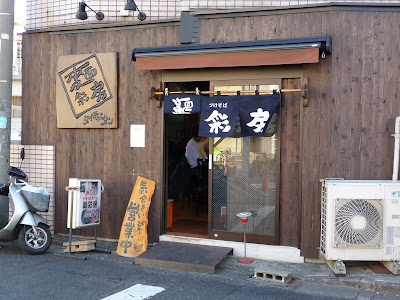 Another of the best known is Mensaibô, a pretty straightforward new school seafood and pork "W" (double) soup shop whose star has been rising. The original location of Mensaibô is right here in Yakushi, but they've recently opened two or three other locations around Tokyo, turning into a bit of a mini-chain in just the last few months. 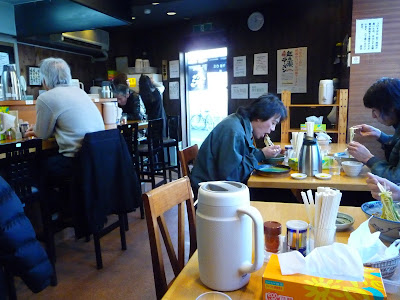 Inside, you've got pretty standard darkish interior, dark wood chairs, tables and open space in addition to the counter. There are even tatami seats in the back for family dining. This is a ramen shop that anyone can feel comfortable grabbing lunch at on their way to or from picking up groceries at the LIFE supermarket (yes, the name of the supermarket is "life") next door. 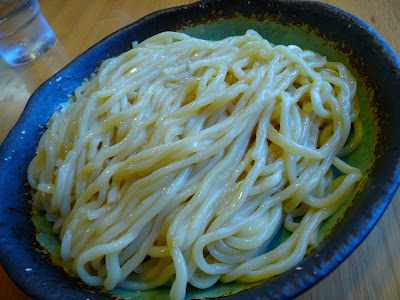 The tsukemen here supersede the ramen in popularity, and it had been a while since I had some tasty tsukemen, so I figured I'd go with those. Again, pretty straightforward - a big pile of extra thick noodles served on a fancy ceramic tray... 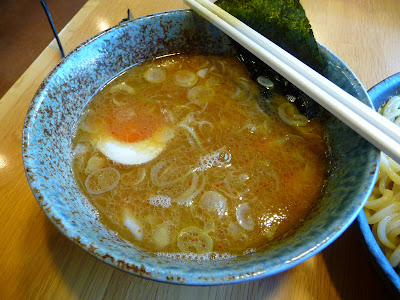 ...and a lightish brown, vinegary, and sweet bowl of soup for dipping in the classic Taishôken mode. With about 99 percent of tsukemen shops, you know exactly what to expect, and it's this. Fat noodles and lots of them, a mild seafood broth with just a hint of spice, the same taste you can get at any other tsukemen place. I'd had this bowl before, at Himawari, at Yasubee, at Benten, at any other of the bazillion tsukemen shops that serve basically this precise dish. This is what everyone wants to eat all the time, apparently. 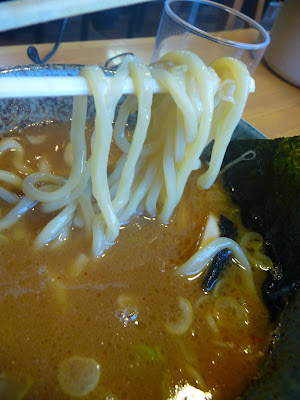 Then it hit me. Tsukemen isn't really competing with ramen. It's competing with soba. All those people going into shops to eat their identical tsukemen bowls weren't ramen fans who switched teams; they were the type you'd usually find at a soba or udon shop for lunch, getting the simple yet tasty, unchallenging yet satisfying bowl of noodles that you find at every other soba or udon shop. But tsukemen is a bit more fun, a bit richer in taste, a bit more interesting than your dad's musty old soba. And on the shop side, it doesn't hurt that tsukemen customers turn tables faster than ramen slurpers do. Or that it's easier to make and costs less to produce. Or that there's a tried and true model to follow. Hence the popularity of tsukemen. Totally tasty, totally satisfying, but at the same time, I think I'm good on this stuff for a while. There are so many more exciting bowls waiting out there!
Posted by Nate at 9:59 PM

i never ate at tetsu...yet!