We banged down our bowls, but Keizo and I had just begun at the Odaiba Ramen Park event. Each month until April, 10 shops bring their best to the Fuji TV patio and set up stands to show what they got. With 10 shops on offer, it was a good thing we had both skipped breakfast. 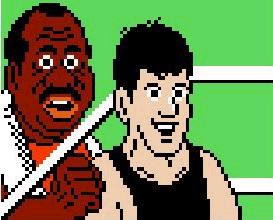 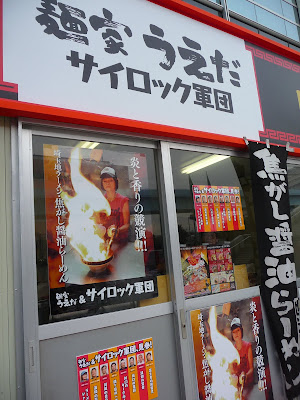 I decided to get my next bowl at a stall featuring a special collaboration between Menya Ueda and Sairokku Gundan. I had been hearing a lot about Ueda recently, since it's one of the shops critic Ishigami Hideyuki is pimping hardest, and the fact that Ms. Ueda was teamed up with a shop named "Psylocke Military Squad" didn't make it any less appealing. 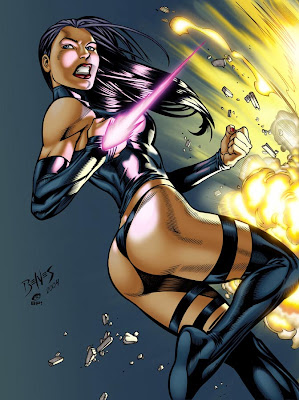 Psylocke was the foxy, vaguely ethnic femme fatale from X-Men, and she was all X-lady. Her special power was shooting purple flames from her hands that she generated through her psychokinetic powers. 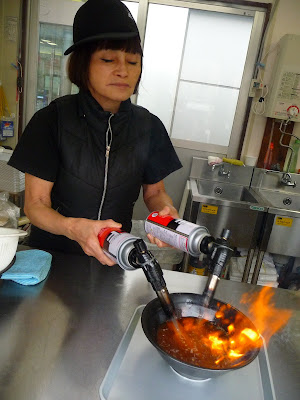 Oh fuzz! Looks like Psylocke is really here! That's Ms. Ueda, who schlepped out from Saitama to show off her flames. Ueda's bowl is a "kogashi shôyu", (seared soy), in which a thin layer of oil is placed atop the soup and then, um, blowtorched. You better stand back when these flames get going, because they leap big. The Ueda / Psylocke team brought their own special metal bowls and trays, since there's no way that the standard plastic bowls could stand up to this kind of psychokinesis. Ms. Ueda herself seems like quite the tough older lady, the kind who you'd expect to find behind a bar counter lovingly giving her customers shit and cracking jokes as she served drinks. Except she's serving ramen. "You ain't never tasted ramen like this before, sonny," she told me as she served my bowl. 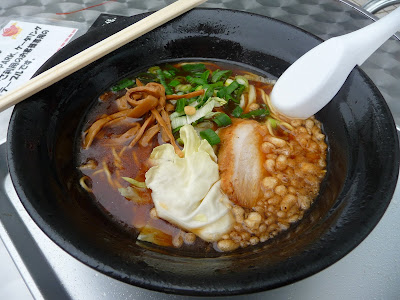 Verily, the smoky taste worked well with the strong shôyu, making for a bowl of soup that was thin but big flavored. Maybe not quite as deliciously decadent as the burnt miso at Gogyô (but then again what is), but Ueda / Psylocke's barbecue'd bowl worked for me. Not such a big fan of the cabbage, but I dug the toasted rice krispies tossed on top. 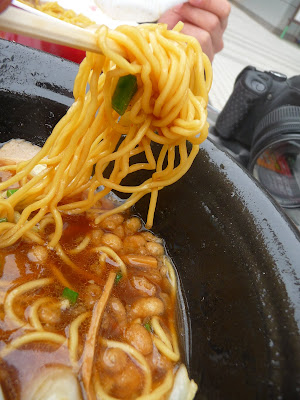 Unfortunately, the noodles were a bit lacking. Thin and straight, they were firm, but in a way that was almost hard. "These noodles suck," Keizo declared. I wouldn't go that far, but they were definitely the weak component to an otherwise strong bowl. Not that I told that to Ms. Ueda when she called out "What'd ya think kid?" at me from across the patio. I don't want to get blowtorched! 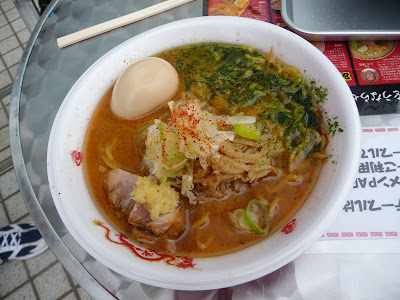 But it was easy for Keizo to be critical since he had just pulled what was easily the best bowl of the day. I had seen the name Nidaime Tsujita around a lot recently, but I had no idea what we were in store for. Both Keizo and I were totally broadsided by this bowl of incredibly rich, deep, strong, and oily miso. It's the only bowl of Sapporo-style miso I've ever had to rival Junren, and Keizo said with gravity "this is very, very close to the level of Sumire Honten", thee Sapporo shop par excellence. There was so much going on in the bowl that it was hard to keep track - a complex miso blend, a dash of sweet powdered aonori seaweed, a generous hunk of minced ginger. It even had a rich winter stew taste that made me wonder if there might be some wine in the broth. 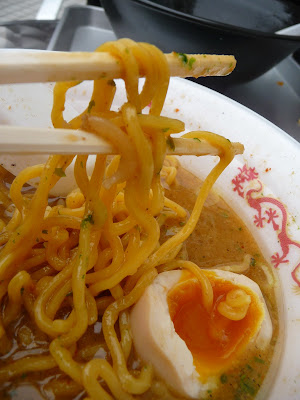 The noodles were yellow and curly, and just chewy enough. Nidaime Tsujita is amazing. We both couldn't get over just how good this bowl was. It's really something to take a formula as fixed as that of Sapporo ramen and take it to another level like this - working within a model without seeming derivate. Kudos to Tsujita, whose star is on the rise. Of all the bowls I tasted that day, this is the one I wanted to run out to eat again. I believe the main shop is in the Ogawamachi area of the Kanda district. 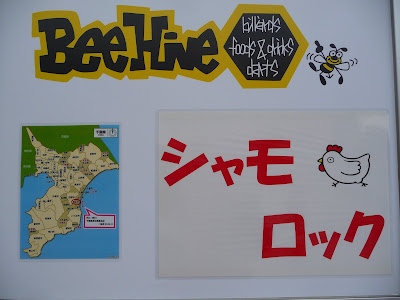 After a brief break, we decided to grab the same bowl for round three - Bee Hive, which hails from the village (yes, it is officially designated a village) of Chôsei, located on the beach in eastern Chiba Prefecture. 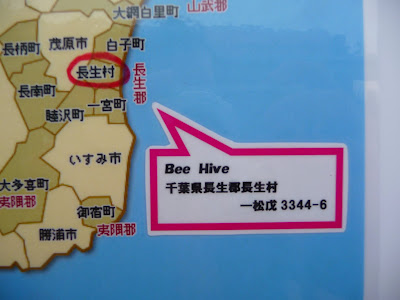 I'm guessing there's not a whole lot to do around those parts, since apparently this chicken soup shop is also a part time pool hall. 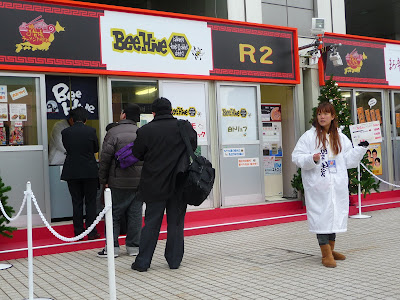 Beside having the cutest girls, Bee Hive also offers... 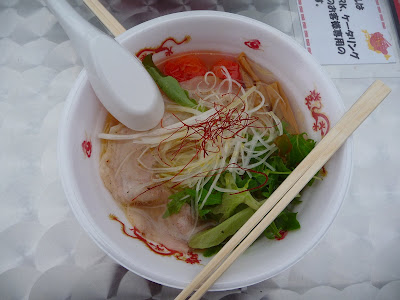 ...a mild chicken stock shio (salt) soup with a few traces of white truffle oil. This is definitely new-style shio, with a veritable salad on top, especially after I added a few roasted cherry tomatoes for an extra topping. Definitely tasty, but anything would have been a bit underwhelming after the one-two punch of Tsujita's ginger miso. The tomato juices went a long way in perking the bowl up, and it was a smooth and easy bowl to down. 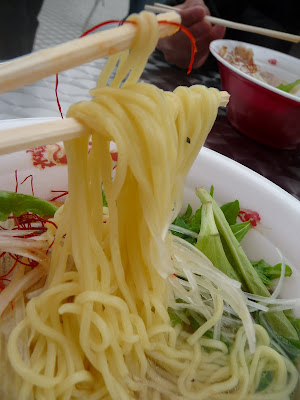 The noodles were good, if a bit soft, and the overall impression was of the new breed of "healthy ramen." While I wouldn't kick this ramen out of bed (and I definitely wouldn't kick the girls working out), we both agreed it probably isn't worth the trip to Chiba. 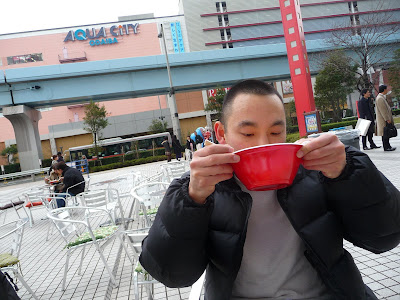 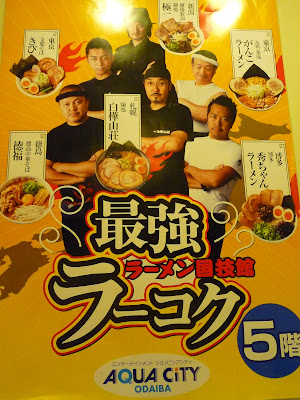 Lesser, or perhaps thinner men would have quit there. We both wanted to eat more ramen, but were both totally stuffed, so we did what anyone would have done - wander aimlessly through deserted shopping malls for four hours, play arcade games, and hope that enough space opened up in our stomachs to eat more. We left the patio behind and headed to Odaiba's own "ramen road" - the Saikyô Ramen Kokugikan, the "National Ramen Stadium of the Strongest." In which the Aqua City mall takes turns hosting groups of six shops from around the country, not unlike at the Ramen Museum or Shinagawa Shinatatsu area. 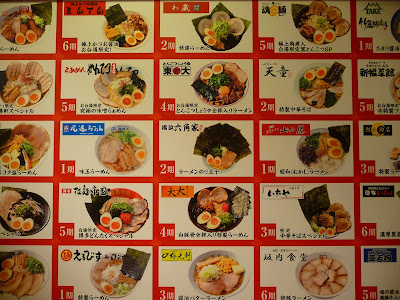 Quite a selection of shops have been through these moderately-hallowed halls... 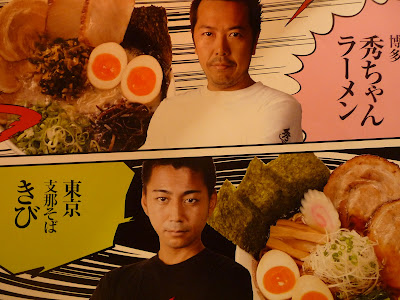 ...and the current batch doesn't look to be messing around either. 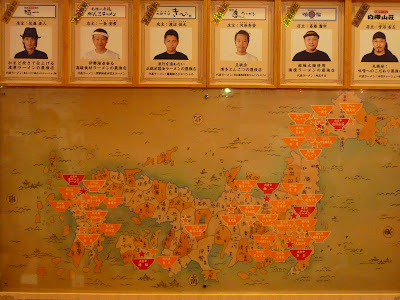 The concept for Râkoku, as the "Stadium" is nicknamed, is the Meiji era, the late 19th century when ramen was first introduced to Japan. 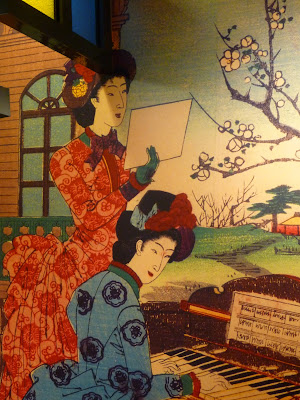 This ladies don't strike me as the ramen type, but whatever. I'm sure they pushed aside their petticoats to gruzzle the occasional bowl from time to time.

These guys however, strike me as the ramen type. We settled on the shop run by the rakish chap with the hat on the left. Satô Naoji began travelling the country to eat ramen when he was 16, claiming to have downed over 1000 bowls. His main shop is Gokuichi, located in Niigata Prefecture, but he's recently been trying to move into the central Tokyo scene. 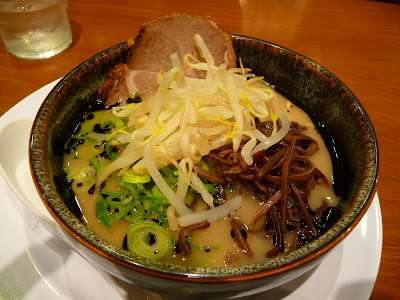 Too bad his ramen sucks. I try to be judicious with my criticism, but this ramen wasn't just disappointing or mediocre, it was down right bad. Rather than draw of the underappreciated tradition of Niigata's local fatty Tsubame ramen or miso curry ramen, the ramen at Gokuichi is nothing more than a poor imitation of Nantsuttei's. Everything about this bowl tasted cheap, and it left an actively bad aftertaste in my mouth. I don't mean that metaphorically - each bite had an unpleasantly bitter almost chemical taste. The addition of some tableside spicy Korean miso at least hid that taste, but it couldn't save the bowl. This was the worst bowl I'd had in a long time. 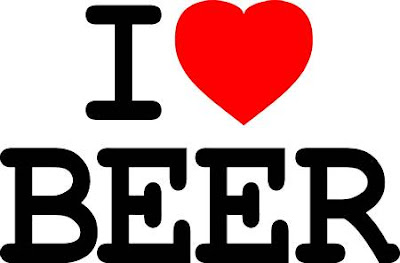 It was a bummer to end the day on a weak note, but we had gotten to slurp some good stuff. I'm excited to see what next month's batch brings, so keep checking back for more from future rounds of the Odaiba Ramen Park. Oh yeah, and we stopped off for beers in Shinbashi, so I guess the day may have ended on a weak note, but the night started on a good one!
Posted by Nate at 12:04 AM