You may have heard that Japanese people are hella good at writing poetry. Haikus and what have you. I do my research on prose fiction and media studies, so I am in no position to confirm or deny that assessment. I do know enough to tell you, however, that in classical poetry, some of the most important poetic tropes and images are seasonal motifs such as flowers, plants, and birds. 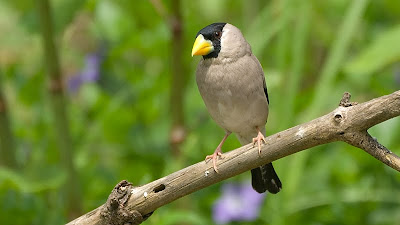 As with poetry, so goes ramen. What could sound more appetizing than a meal at Ikaruga - "Masked Hawfinch"? 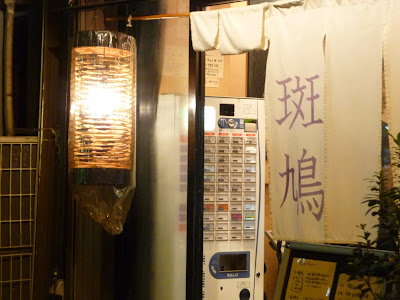 Granted, they say the poetry is what's lost in translation, but why would one of the best and most popular shops in Tokyo name itself after an obscure avian? 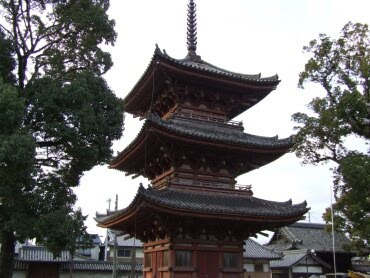 It just so happens that the reason why the Ikaruga fowl is such a resonant poetic symbol is because it shares its name with the Ikaruga district of the ancient capital of Nara, home to some of the most important sites in Japanese history. 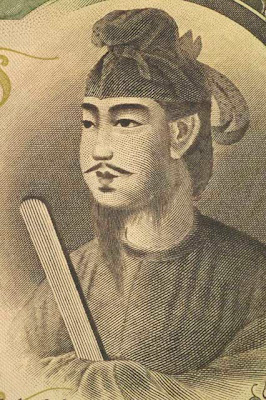 Shôtoku Taishi, the semi-legendary prince said to have introduced Buddhism to Japan from Korea is a giant in historically significant stature, and he's the one that founded Ikaruga Temple, which is now Hôryûji Temple, reliquary of some of the most priceless artifacts of Japanese art and early scriptures. Ikaruga was built, and Japan would never be the same. 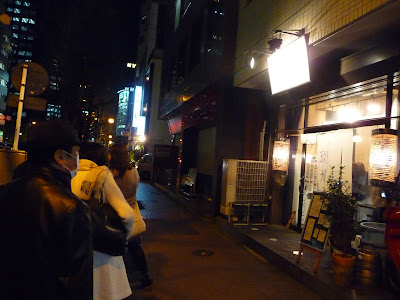 But does the same go for Ikaruga, the ramen shop? Me and 25 of my closest friends huddled in the cold one winter evening to find out. Ikaruga won top honors on the 2006 edition of the TV Champion program, a sure way to gain instant fame. The reputation of Ikaruga as a top-flight shop (I couldn't tell you if the Masked Hawfinch is migratory, but you know what I mean) later that year when it won the magazine Tokyo Weekly's "Ramen of the Year" award in the shôyu (soy sauce soup) division. 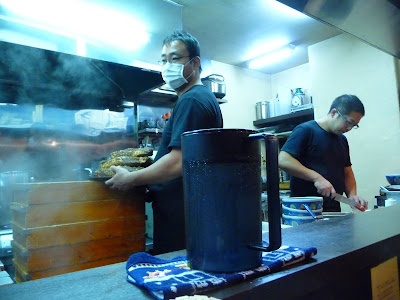 Located in Kudanshita, just a stone's throw from the Imperial Palace, Ikaruga has become canonical, and has a line longer than that of "unbroken" line of Japan's Emperors. Inside, it's a relaxing atmosphere, and they have customer service down pat. 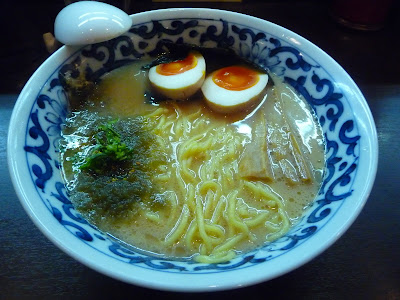 And here's the famous bowl. Shôyu may it be, it's like no soy sauce ramen I've ever seen or tasted before. The thick noodles sit in a creamy white broth that looks more like a classic tonkotsu (pork marrow) soup with just the right amount of oil. Ikaruga's bowl is one of the most amazingly complex and well-balanced I've ever tasted - this is truly gourmet food. In reality, Ikaruga dishes out their own variety of the ever popular "W" (double) soup style - here it's mild, smooth porky tonkotsu with soy tare (flavor essence) blended with a seafood broth made from the highest quality katsuo (skipjack tuna) and konbu seaweed from the Sea of Okhotsk. And I'm sure there are a few secret ingredients thrown in as well. 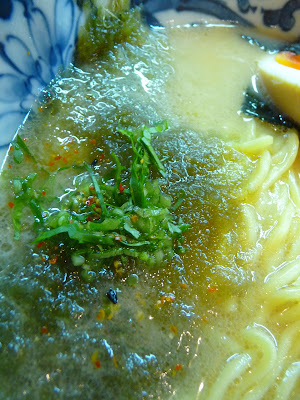 What's that slimy green stuff on top? It's tororo konbu, a type of fine algae. I'd never seen it before and ordered it as an extra topping, but I think I might skip it next time. Interesting as it was, it was a bit too...well, algaey for me. Still it added to the overall impression of Ikaruga's as ramen you can eat nowhere else. 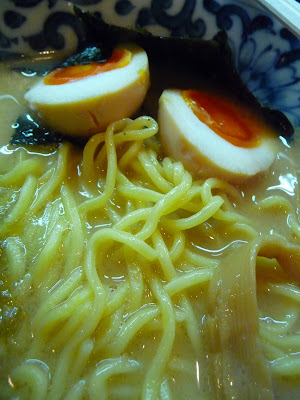 Every bite was savored. Every smooth sip sucked down. The egg was one of the most flavorful I've ever had. The noodles perfectly chewy. And no matter how much I rolled that creamy soup around in my mouth I kept finding new accents in it. And yet, as much as is going in there, it's oh so satisfying. This was a truly masterful bowl of ramen. 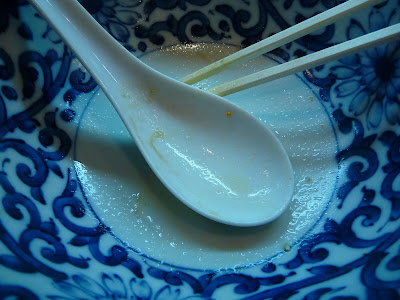 You best believe this was good to the last drop. One of the best bowls I've ever had, and well worth the wait. 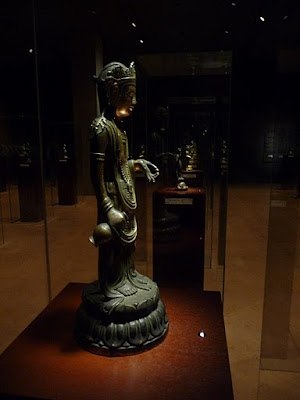 As well-crafted as one of the 7th century Buddhist masterpieces found in its namesake temple, this is one for the ages.
Posted by Nate at 10:09 PM

ohhhhhhhh shit. This sounds like my perfect bowl. <3 Can we go there when I visit ????

yessir. you want to go to there!

went here last week. was amazing. the soup was like... drinking a pig.

nice! a pig blended with seafood that is!