Last month was the annual used book fair in Jimbochô, the neighborhood that is thee place to go for all your bibliophilic shopping needs. Located smack dab between the knowledge hungry students of Tokyo University and the publishing companies along the palace moat, Jimbochô provides the perfect mediating space for sales of that great medium, the book. And, while there are plenty of good ramen shops in the vicinity, Jimbochô is more famously known for its curry - allegedly because it's far easier to balance a curry spoon in one hand while reading than slurp a bowl of ramen. 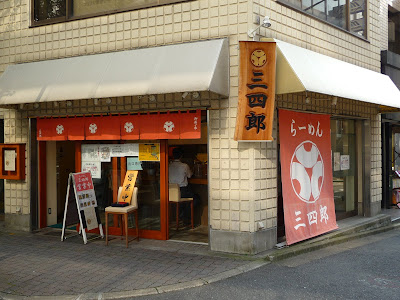 But what about...curry ramen? Who says you can't have it all? High-rolling ramen rock star Nakamura Shigetoshi recently opened Sanshirô, a new shop on the back streets of Jimbochô, serving "Masala" curry ramen in addition to home shop Nakamura-ya's highly regarded shio (salt) and shôyu (soy sauce) broths. 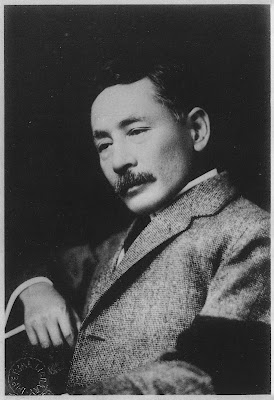 The name Sanshirô, while not exactly popular in the present age, is, in its own way, one of the most famous proper names of modern Japan. One of the most famous novelists of modern Japanese literature is Natsume "They Put My Face on Money" Sôseki, and one of his best loved works is none other than "Sanshirô", which tells the story of a young student who journeys from the provinces to the capital to begin a new life in the big city in the early 20th century. So just naming a shop after this great character of the literature of the Meiji era in the most bookish neighborhood in the land is already taken to wit, but Nakamura's choice is even more well thought out. The exact address of Sanshirô is Ogawa-machi; and the last name of our humble protagonist Sanshirô just happens to be...Ogawa. Coincidence? Me thinks not. 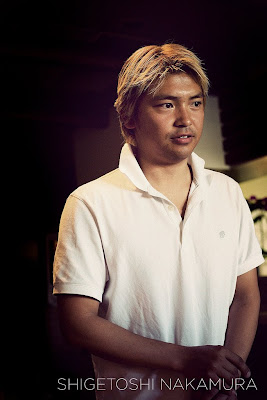 That Nakamura is certainly one smart cookie, and a bit of a modern day Sanshirô figure himself, "arriving" at a tender age. He founded his first ramen shop, the eponymous Nakamura-ya in 1999 at the ripe age of 22, then shot to stardom in 2001 after winning "Ramen of the Year." He kept on rising from there, first opening "Essence", which serves rarefied ramen-centric haute cuisine at 100 bucks a meal, then venturing across the sea to open Ramen California, one of the interesting, experimental, and best-reviewed ramen shops in America. 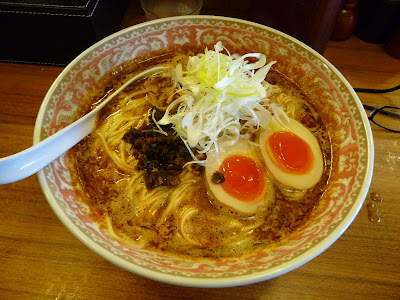 The bowl that arrives at Sanshirô certainly bears the appearance of great care - ochre and caramel swirls of curry blending together, topped with a miniature mountain of onions set upon a bed of thinly cut bamboo shoots. But Japanese curry isn't Japanese curry without a little helping of sweet and salty "fukujinzuke" pickled vegetables, a little diced mound of which completes the bowl, adding a nice bit of crunch and pop. This curry goes down smooth and tasty. 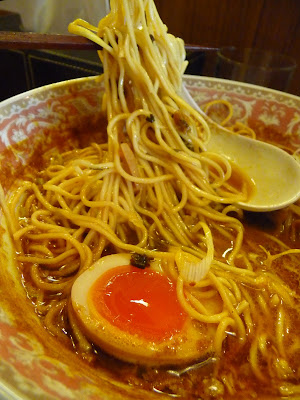 We are definitely working at a level beyond simply putting ramen into curry the way a cheap chain shop might. God only knows how many different spices went into this made from scratch soup. And yet, delicious and warming and nuanced as the broth is, a small part of me still couldn't shake the lingering taste of basic boxed curry. As for the noodles, they were thin, straight, and al dente not unlike those found in Wakayama ramen. But I was surprised to see that Sanshirô is yet another shop outsourcing their noodles from the ubiquitous Mikawaya Seimen factory. You're a hot shit chef Nakamura, come up with your own house noodle! I've also heard that Sanshirô's is not a full kitchen, but that all the primary preparations are done across town at the Nakamura-ya home shop, then trucked in. Maybe so the master can better keep his eye on the quality? 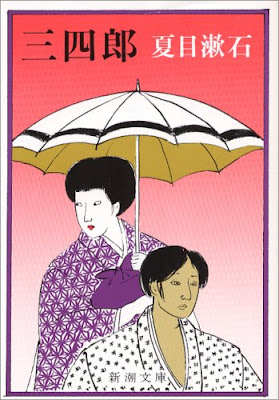 It sounds like I've got a lot of beef (er...pork?) with Sanshirô, but despite these quibbling reservations, it really is a tasty shop, and one I hope to revisit and sample the other soups at. Keep it on your radar when you need extra power for book shopping, or hit it up if you want to try Nakamura's noodles without schlepping out to the next prefecture over, spending 100 dollars, or buying a plane ticket to California.
Posted by Nate at 5:31 AM