It was a good night for rocking out. The mosh train had rolled in, and a killer lineup of thrash titans came to Tokyo for a long night of punk rock broootality.

International hardcore sooopergroup Conquest for Death were on a double headliner bill with Holland's Vitamin X, supported by local faves Flipout AA and many more, and the punks were ready to go off. There was circle pitting, creepy crawling, picking up change, slamming, slapping the floor, and other obscure hardcore subgenre dance moves in full effect. You have never seen so many graduate students rock out so hard. A good time was had by all, except for my friend T, who got his nose broken. 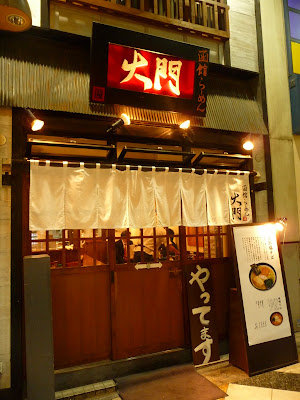 Once the smoke had cleared and the sweat had (sorta) dried, the crew decided to grab a quick bowl to replace the salts that had been secreted out in the crush of excited hardcore kids. Hakodate Ramen Daimon was just around the corner, so we decided to keep it quick and simple since we were drunk, exhausted, and covered in other people's punk rock body cheese. 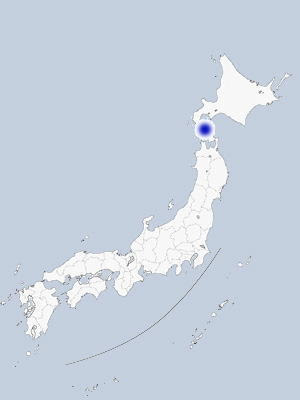 Hakodate is the southernmost major city on Japan's northernmost major island of Hokkaidô. The first thing that springs to most minds at the words Hokkaidô ramen is Sapporo-style miso in the Sumire / Junren model, but the northern island hosts multiple styles, including Asahikawa seafood and pork ramen and the recently popular curry ramen from the port of Muroran. But Hakodate is famous for being the only city in Japan to claim shio (salt) ramen as its local brew. 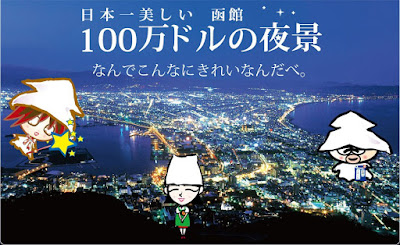 Most people do not go to Hakodate to eat ramen. They go to take baths in hot springs, admire the famous "million dollar night view," eat sushi, and then engage in sexual congress. It's the kind of place you go (allegedly) for a romantic weekend getaway, which doesn't tend to include ramen gruzzling. 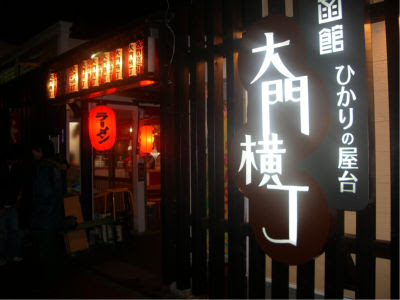 But in a cold city of northern latitudes, nothing warms the belly like a bowl of piping hot chicken soup (with a touch of pork). At some point in the early 20th century, a bunch of Cantonese immigrants ended up in Hakodate (port town connection I suppose), and shops selling southern Chinese thin soup with veggies (tanmen) began popping up. By the postwar period, the word "ramen" had come to mean shio ramen in Hakodate, and it became the default local slurp. It's something of a workhorse style, and not especially flashy given the current state of ramen climes. Daimon, located just inside the Nakano Sun Mall shopping complex, takes its name from the city's major market and nightlife district. 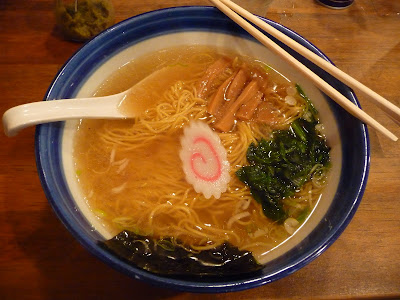 The bowls came up, veritable tubs of noodles in thin yellow soup. The trappings are fittingly old school, including nori seaweed, menma (pickled bamboo), stewed greens, and of course that staple of ramen imagery, the pink and white whirl of naruto fishcake. The soup was simple and warming, but nothing special, more or less a standard chicken soup without too many distinguishing characteristics. Good for a cold night, but hard to get excited about given the nature of today's ramen world. 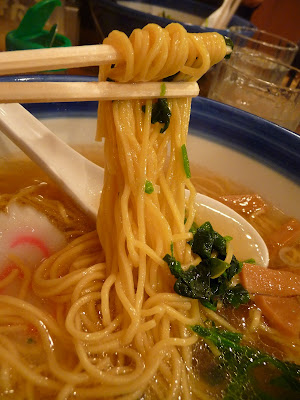 Hakodate-style noodles are medium thin, straight, and tend to be cooked rather soft, which was the case at Daimon as well. This is comfort food for the empty stomach, but not much else. Shio ramen is an interesting style, in that it languished in obscurity for decades, little known or eaten outside of Hakodate, or appearing as a little-ordered menu item on local shops serving a bit of everything. But the last few years have seen a reimagination of this humble varietal, with shops like SOU, AFURI, Nakamura-ya and others (LINK?) using designer salts, yuzu citron, refined vegetables and seafood to elevate it to a high-end style. I seem to remember grumbling that Daimon pulled about a B- on its report card, but it's good to get in touch with the roots of shio ramen, if only to have a standard of comparison for all its present incarnations.
Posted by Nate at 7:44 PM

That night view is awesome! I remember it well.

Oh how I wish I could be there -these look fabulous! a dipsomaniac ghost is the best kind to have, I would think Costumes rock 20s costumes

I love reading through a post that will make men and women think. Also, thanks for allowing me to comment!Schlüsseldienst Graz

Thank you so much for the post you do. I like your post and all you share with us is up to date and quite informative, i would like to bookmark the page so i can come here again to read you, as you have done a wonderful job.hotel Pie de la Cuesta

This is a amazing inspiring composition.I am gorgeous plenty pleased among your salubrious process.You put truly really cooperative info.termite treatments

I found your this post while searching for some related information on blog search...Its a good post..keep posting and update the information.Second home