(EDIT: Despite claims that they were a "limited time only" shop, the crew at FUTO have reopened for (seemingl) long term business in the new year. Great news!)

A few months back, cheap low-end tsukemen purveyor Asahi brought down its shutter for good. I can't say I'll miss Asahi, but they did nearly save my life when I was hit by The Big One. Hangover that is. I hadn't given the vacant storefront much thought until last week when I was biking by and saw a massive line huddled beneath a sign bearing a single character: 太. (Futo) FAT.

That's the name of the shop, and that's just what this ramen was - Fat fat fatty boom batty. 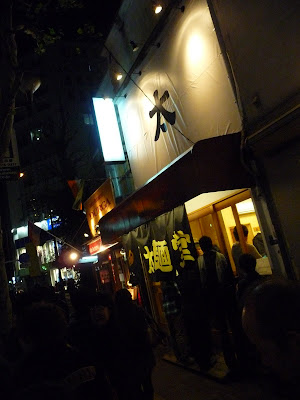 Blog reader Christopher had also tipped me off to the new hot spot, and online chatter abounded. The deal: A limited time only team up between Asakusa's Kaikarô (開花楼) and Fukuoka's Mengekijô (Noodle Theater) Gen'ei （麺劇場玄瑛) . The former, a noodle factory that supplies the slurp to many of the top tsukemen shops in Tokyo would bring the wheat, and the latter, a high end Hakata shop known for both its classic tonkotsu (pork bone ramen) and unusual new wave stylistic experiments would bring the broth. But you've better move fast, because this collaboration is only lasting until December 30th, when both teams go home for the New Years Holiday. Hence the killer line about 25 deep when I rolled up at dinner.

Compare - the same counter last winter at Asahi Tsukemen, populated by a few drunks and a very hungover me: 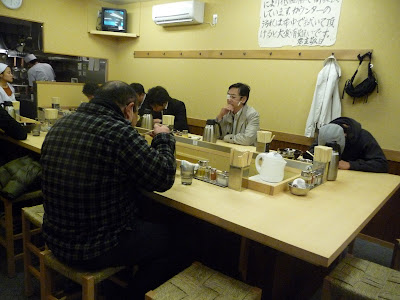 And now, a bunch of ramen fans delighted to be getting their gruzzle on at Futo: 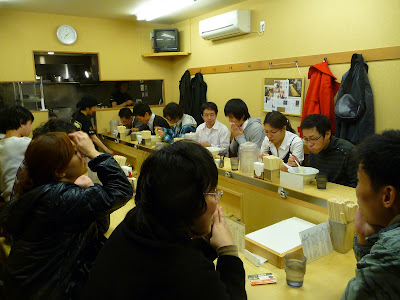 The line may have been long, but there was a friendly festive atmosphere as people buzzed with excitement about the shop. I chatted it up with a ramen freak couple in their 60s, comparing favorite shops around north Tokyo. It's a lifelong addiction, don't let anyone tell you otherwise! 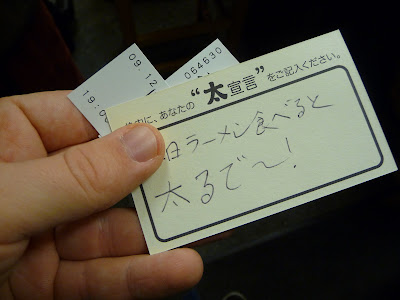 There's only one option on the ticket machine inside - a button marked, yeah, you got it - 太 FAT. But wait, how can you get Futo's 800 yen bowl of ramen knocked down to a mere 650 yen? Press the 650 yen button, take one of the cards by the machine, write out a sentence in Japanese using the character 太 , and hand it to the waitress. Make her giggle and you might get your card posted on the gallery by the ticket machine. I wrote out: "Eating ramen every day will make you fat." Luckily I've been managing to keep the pounds at bay by riding my bike to each bowl. 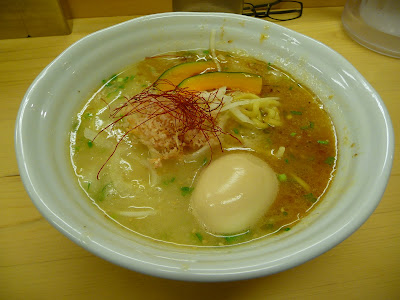 The bowl that comes out isn't quite like you've ever seen before. Two-toned, the left half is a creamy milk tonkotsu white, while the right half has an unidentified brownish orange oil laid atop the soup. Toppings include the unconventional raw onions on the white half and the even more unusual-for-ramen slices of stewed kabocha pumpkin on the orange half. Smack in the middle is a little pile of shaved dried skipjack tuna, splitting the difference between the two. Too bad I didn't get a pic of the open egg - you've got your white, then you've got the inner yolk, and I don't think I need to tell you what color that is. 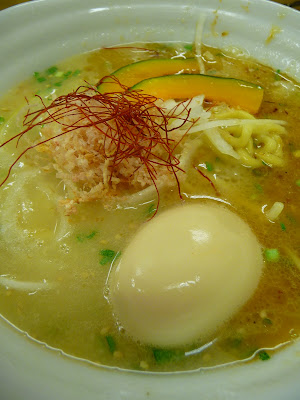 Let's get a closeup just so I can keep drooling over this soup. The broth is extremely thick and gooey, and retains that rich porky tonkotsu taste while staying mild and even sweet. It's actually a blend of two soups, but this ain't your average fish "W" (double) soup. The seafood broth is made up of clams, dried shrimp, scallops cooked in sesame oil to make it extra rich and give the pork a pleasant perfume rather than overwhelm it with fishiness. I ain't gonna lie, the team at Gen'ei knows what their doing, and they don't call themselves "Noodle Theater" for nothing. 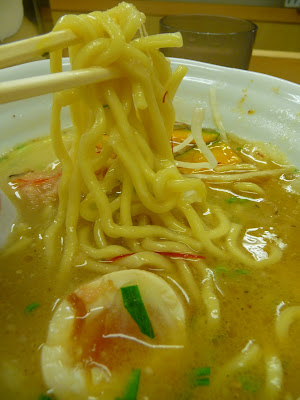 But let's not forget to give some love for the local noodlers. The team from Kaikarô (House of Civilization) come correct with noodles that are - take a wild guess - thin. No wait, these noodles are fat. FAT. Anything less would be uncivilized. They may not be the veritable udon of Kitarô around the corner, but they rank up there on the diameter-meter. Much as I love Hakata tonkotsu ramen and its thin wiry threads, deep down I crave that soft and sproingy 'mochimochi' chew to extra thick noodles, and these fit the bill. 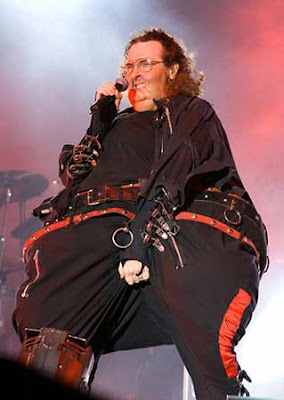 Doods, I cannot express how satisfying of a slurp this was. Rarely do you get a bowl of ramen this well thought out, and I can virtually guarantee there's nowhere else to try this taste. It pains me that the world will only have two more weeks with which to appreciate it. Mark your calendar and brave the line, this one is worth it!
Posted by Nate at 8:39 PM

Closed on Mondays! FYI. Anytime I see thick noodles and kabocha I think of eating hoto udon in Yamanashi.

DAMN! I can't believe I TOTALLY MISSED THIS!!!