I had some free time and it looked to be one of the last clear days before the winter weather arrived, so I hopped on my bike with no direction known, headed off to undecided precincts. My pedals took me to the far northwestern corner of central Tokyo, where the (moderately) mighty Arakawa river runs out from suburban Saitama Prefecture. 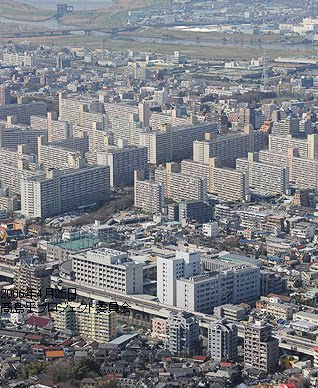 And then all of a sudden it stopped, as I bumped up against a levee marking the end of the city and the beginning of the river. I paused to take a gander at the setting sun, then realized I was ravenously hungry. Fortunately, the danchi dwellers need to eat too, and even more fortunately, they have good taste in ramen. 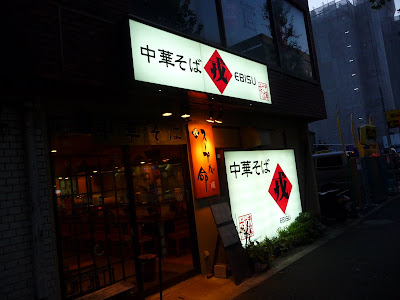 Located near the Nishidai station near the end of the Mita subway line is Ebisu, a neighborhood shop specializing in Wakayama-style ramen. The neighborhood in question is Takashimadaira, a danchi zone so big it spans three subway stops. When Wakayama ramen originator Ide Shôten was named "the best ramen in Japan" on TV back in 1998, a glut of imitators sprung up all over Tokyo. But only the strong survive, and Ebisu had what it took... 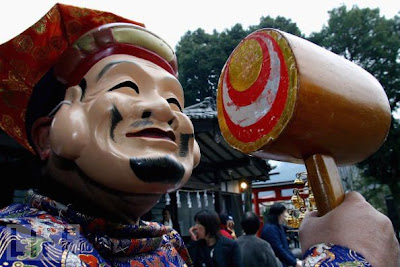 ...which isn't surprising, considering the shop's moniker namechecks both the god of good fortune... 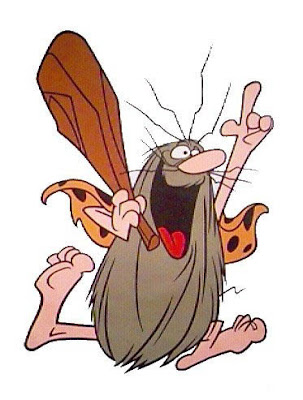 ...and powerful hairy barbarians. The shop master may not be a native Wakayamanian (Wakayamaniac? Wakayamanite?), but he travelled extensively in the prefecture, learning what makes a good bowl of the extra strong pork, chicken, and soy sauce broth. 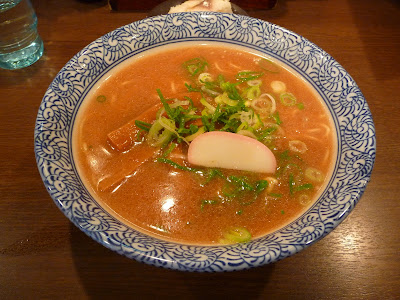 Which looks a little something like this. Imagine a bowl of Hakata ramen with plenty of rich shôyu (soy sauce) dropped in, or maybe a thinner noodled, thicker brothed Eastern Japanese soy soup. Either way, Wakayama ramen (along with Tokushima ramen and Kyoto ramen), falls right on the East-West divide between the richer tonkotsu (pork bone) soups of Western Japan and the thinner soups of the East (which was itself once called the "land of barbarians"). 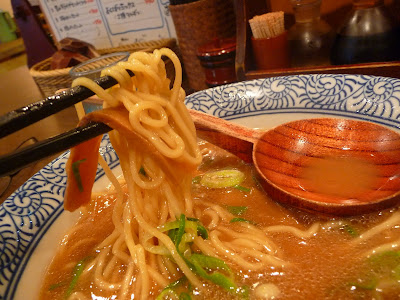 While perhaps not quite as strong a soup as Ide Shôten or Macchibô, Ebisu is a solid contender, with that simple yet deep-cutting and warming pork and soy broth with more than a hint of chicken. There's more than a hint of sweetness, and the thin straight noodles (which are perhaps a bit softer and thicker than at similar shops) slurp down easy. I had been nursing a head cold for weeks and this busted it right quick. 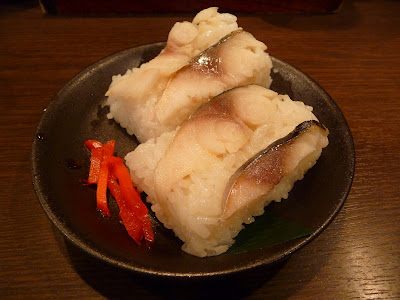 And then there's one more thing about Wakayama ramen that makes it near and dear to my heart (and stomach) - any shop worth its salt offers a side menu of mackerel sushi. The oily, oceany fish doesn't sound like a natural pair with ramen, but it works for me. Ebisu goes a bit skimpy with the fish, but at least they press 'em fresh, rather than serve prepackaged sushi like many other shops. Ebisu is very solid stuff, but I dunno if it's worth schlepping out just for this ramen. Having said that, it's definitely your best option if you get hungry in this hood sandwiched between the river and the projects.
Posted by Nate at 9:26 PM

With a lot of reading from various articles will add to our knowledge. thanks have various insights . obat viagra

This is a great inspiring article.I am pretty much pleased with your good work.You put really very helpful information. Keep it up. Keep blogging. Looking to reading your next post. Click to visit game. sims 4 cheats