When I'm not eating and researching ramen, I do occasionally do some real studying too. Hard to believe but true. Between bowls there are indeed sown the seeds of a dissertation. But discussing and dissertating makes a man hungry. 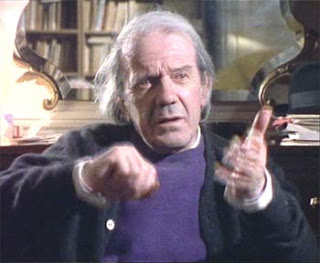 My comrades and I had congregated to puzzle our way through Gilles Deleuze's "Difference and Repetition", which is, uh, one tough theoretical nut to crack, to say the least. After touching on Plato, Artaud, Lewis Carroll, the nature of the police, the Chinese Cultural Revolution, and something called "transcendental stupidity," we we wandered off on our separate ways to forage for dinner. My overworked noodle was craving some noodles, so my buddy K led the way to his local joint Kôkaiya in his hood of Asagaya. 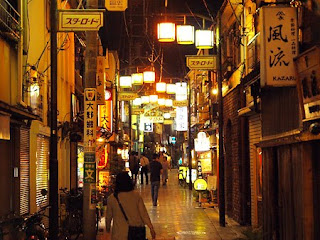 Asagaya is one of my favorite areas in Tokyo, and I'm always glad to have an excuse to find myself there. A longtime literary haunt, it's famous for playing home to a number of well-regarded authors, as well as more than it's fair share of laid back bars and cafes, cozy restaurants, repertory movie houses, and experimental theater venues. As many times as I'd wandered Asagaya's alleys, I had never bagged a bowl there, but K has the rundown on all the noodle houses in town. 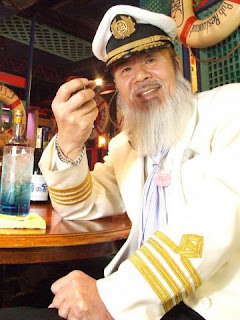 Another literary type who ended up in Asagaya is Hagiwara Shô, founder of Kôkaiya - onetime photographer and editor, he quit his day job 16 or so years back to open up shop. Kôkaiya means "On a Voyage", or perhaps "Out to Sea", and Hagiwara makes no bones about his love for the ocean. The dude gave his first son the kanji for "boat" as a name, and called his second son "at home at sea." And a trip on the high seas is definitely a good metaphor for opening a ramen shop in Tokyo, where something like one new shop is opening every single day in the metropolitan area. Don't worry, he's a lot more of a regular guy than the crazy captain in this photo. 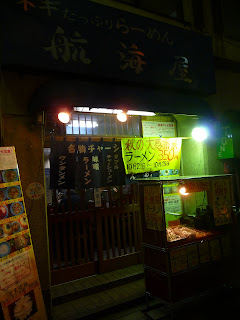 Kôkaiya is very much a cozy little neighborhood ramen shop, and I was surprised to discover that there are now five branches dotted around west Tokyo, though the Asagaya branch is the original. A few years back the shop found itself getting quite a bit of media coverage, and the wall displays the requisite array of illegible celebrity scrawls testifying to tastiness. 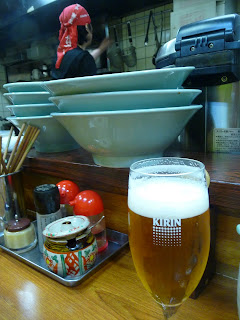 I should have taken more photos of the pleasantly cluttered inside of the homey old shop, but I had other things on my mind, namely beer. Though Kôkaiya, founded in 1993, isn't as old as it's appearance might belie, it was opened well before the present ramen boom, so there are no pretensions to high design or fancy furnishings. 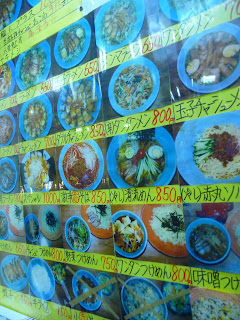 It took a while to decide what to order, given the multi-colored menu that takes up nearly an entire wall. In the ended I decided to go with that most sure fire order of all - plain old basic ramen, a bargain at 550 yen a bowl. 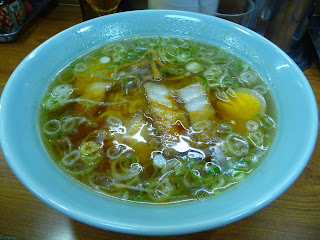 Though Tokyo shôyu ramen mecca Ogikubo is a mere one station down the line, Kôkaiya's bowl is a creation all its own. Somewhat unusually, they use no pork stock whatsoever, basing the broth in pure chicken, which you can have by itself ("original taste") or blended with fish stock made with skipjack tuna, flying fish, and sardines ("new taste"). The result is a broth refreshingly light in both taste and color - rather than putting the soy sauce tare (flavor essence) at the bottom of the bowl, Kôkaiya lays it across the top and lets it slowly sink into the soup. 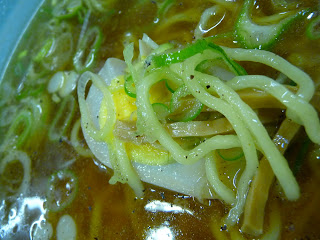 The result is as delicious and restoring as grandma's chicken soup (sorry Bubbie, maybe even better than yours), and it goes great with a couple dashes of black pepper across the top. After spending so much time at newfangled shops each trying to outdo the other with inventive ingredients, complex blends, and dense punchy soups, it felt great to settle into a nice old school soul food bowl. My only complaint about Kôkaiya is that they don't seem to have an onion ramen option on the menu, which is a damn shame, because they serve some of the best and crunchiest scallions I've had. At least the basic bowl already features a generous helping. 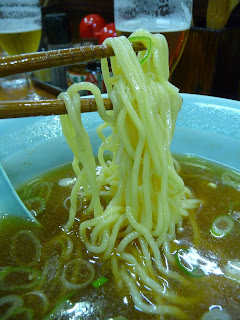 The noodles are homemade as well, and stay nice and firm all the way down. You can check the website if you're inclined to learn more than you ever wanted about how yeast is fermented. I ain't no scientist, but I know how to read results, and these are some fine chewy noodles. It just goes to show that a great bowl of ramen doesn't need a lot of fuss - just chicken soup, onions, and noodles is enough, as long as all three taste great. Keep on rockin' Kôkaiya (and I'll keep reading inscrutable French philosophy...).
Posted by Nate at 11:09 PM