One mini bowl down and my initial pangs sated, I adjusted my pants and got ready for the rest of the evening. "Make me proud," Keizo had said to me when I told him I was on my way to the museum. As long as I didn't make myself sick. My buddy T rolled up a few minutes later and we proceeded to bang down the next bowl at Ide Shoten, lofty progenitor of Wakayama Ramen. 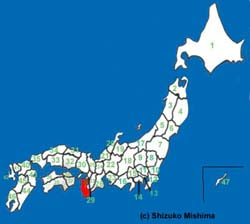 This was the shop in the museum I was most excited about. Firstly, Wakayama is a place with deep roots for me, since it's the first place I lived in Japan, ten long years ago. Secondly, I had eaten a great bowl a few months back at Macchibô and gotten hooked, so I was eager to try the original. Third, Keizo had told me this place was the ill fizzle. 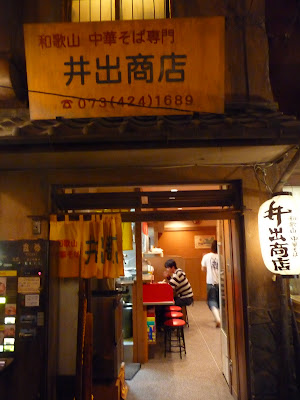 Ide Shôten is generally considered to be one of the primary progenitors of Wakayama ramen, but for a long time there was no such thing as "Wakayama ramen." Firstly, Wakayama is one of the places where ramen is, for whatever reason, most commonly called by the older name of Chûka soba (Chinese noodles), rather than "ramen" as such. Secondly, though the unique style of Wakayama ramen dates back decades, unlike Fukuoka or Kitakata, there wasn't much consciousness of Wakayama as a "noodle town", and "Wakayama ramen" was just the ramen that people in Wakayama ate. No biggie.

But in 1998, Ide Shôten appeared on the ever popular program "TV Champion" was has pushed so many shops into the limelight. A few years earlier, Macchibô had started selling Wakayama-style Chûka soba in Tokyo, but it's amazing what taking a title like "the best ramen in all Japan" will do for an obscure prefecture's PR. Not long after, Ide Shôten was invited to take a spot in the ramen museum, and the idea of "Wakayama ramen" was created through these media exposures. There are other ramen traditions in Wakayama city, but for anyone outside of Wakayama, the name generally means ramen in the Ide style. 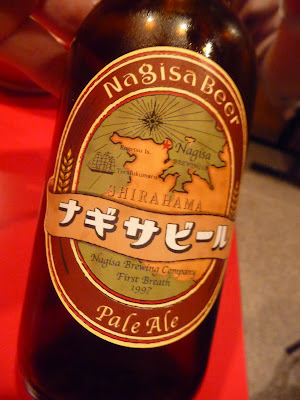 T and I were hella ready to get our gruzzle on, but first we needed beer. There's a lot of crappy and overpriced local brews in Japan, but Nagisa is not one of them. Brewed in the beach town of Shirahama, this is one of the best beers I've ever had in Japan - dark, rich, sweet, and tangy, I would definitely drink this one again. The smooth strong taste went perfectly with the smooth strong soup that you are probably ready to hear about... 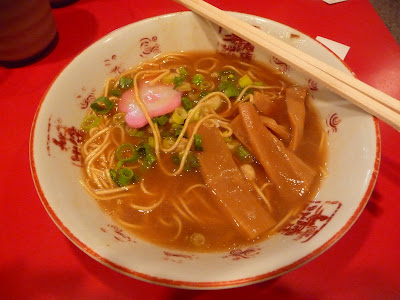 I went and made it unpretty by picking out my pork and giving it to T, but who cares about pretty when the it tastes so good! Wakayama ramen is a sort of distant cousin to Kyushu-style tonkotsu (pork bone) - thick broth with thin, extra straight noodles. But whereas in Kyushu its all about the pig, the Wakayamanians have added extra deep, powerful soy sauce to the mix, and the result is one of the best blended bowls I've ever had. Another point of reference might be cross-strait cousin Tokushima ramen sans egg, and it's only a short step to the gritty chicken of Kyoto standby Tenka Ippin. Go any further east and you'll be in the land of thin shôyu soups, but Wakayama ramen is fatty Western Japanese soup all the way. 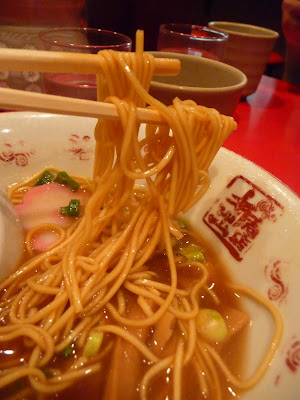 While not as al dente as Hakata noodles, the firm, low water content noodles at Ide Shôten soak up the soy soup after a few minutes, turning an appetizing caramel color. The bamboo shoots and onions are top tier, and everything about this bowl was almost perfect. Except for the fact that it was over far too soon. I'll hopefully go visit my old stomping grounds in Wakayama sometime in the next year, and you better believe that when I do, Ide Shôten is on my not to miss list. But for now, further bowls beckon! On to the next round!
Posted by Nate at 10:34 PM