The long-awaited (?!) part three of ramen museum coverage! It's been a hectic couple of weeks, with plenty of noodles being slurped, but little time to post. But there's a backlog of bowls building, so hold on to your chopsticks and get ready for a pot's worth of pork soup postings! 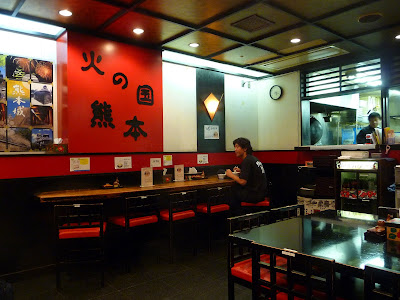 Two bowls down, I was halfway there, and I was livin' on a lot more than just a prayer - namely, beer and noodles. Next up was Komurasaki, representing the ramen of Kumamoto prefecture on the southern island of Kyushu. Kumamoto ramen has come to be a favorite style of mine, with it's medium thin straight white noodles soaked in a rustic tonkotsu (pork bone) broth topped with lots of garlic. Komurasaki is one of the granddaddies of the style, dating all the way back to 1954. 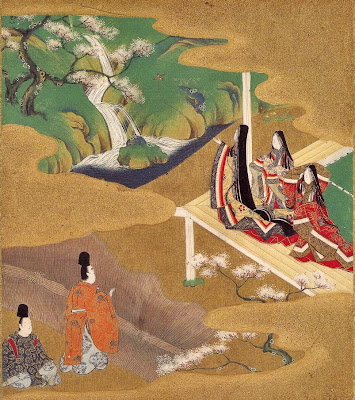 Now, when you think of the word "komurasaki" (little purple), it might call to mind the name "wakamurasaki" (young lavender), book five of the Tale of Genji and poetic epithet for Genji's most beloved (and youngest) bride. Right? Yeah, just kidding about that one. Komurasaki's ramen ain't no refined courtly chow, it's a down home bowl of creamy melted meats accompanied with plenty of pickled vegetables. 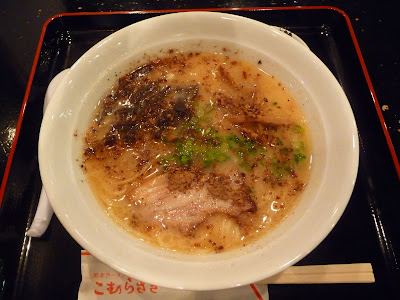 Besides the standard menma (bamboo shoots) and scallions, Komurasaki's bowl contains the near mandatory Kumamoto topping of soft yet crunchy shreds of wood ear mushroom (kikurage - "tree jellyfish!"). But rather than feature a dark layer of the mâyu, the burnt resin of garlic cooked in sesame oil), Komurasaki's tang comes from a dusting of dried, fried and crumbled garlic cloves that slowly melt into the soup. 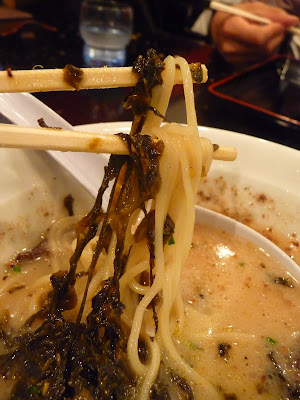 In classic Kumamoto fashion, the noodles are a bit thicker and softer than those of next door neighbor Hakata ramen, almost resembling, uh, cheap spaghetti. To be perfectly honest, this bowl didn't really do it for me. The soup tasted a bit thin and weak, even with the garlic. Komurasaki's bowl reminded me the ramen at Keika, another old school Kumamoto joint that left me underwhelmed. Though I respect the adherence to the local tradition, I like my pork soup with a bit more punch, like the similarly styled ramen at Higo Noren in Shinjuku. Of all the bowls I ate that day, Komurasaki's was the most underwhelming, but you know what? That's OK. It's the exception that proves the rule and allows you to truly appreciate the greatness of all the other bowls at the museum. 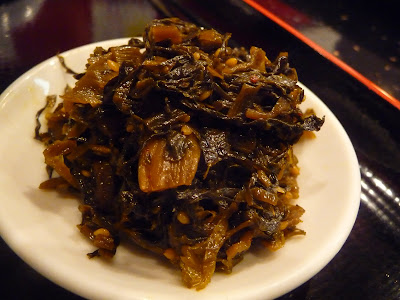 And it didn't hurt that the extra side of pickled mustard greens (takana) were some of the best I've ever had. 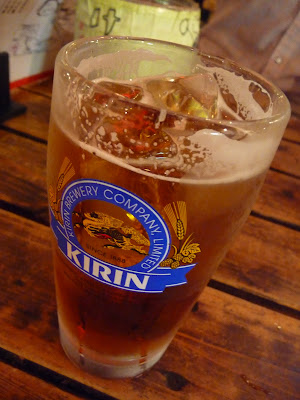 T and I decided to take a break before challenging bowl number four, plunking ourselves down in the middle of the museum's central pavilion and taking in the atmosphere, as well as a couple of cold drinks. When immersing yourself in the late 1950s, the beverage of choice is of course Hoppy, the concotion of distilled barley spirits and malt syrup loved by decades of old men, and me. 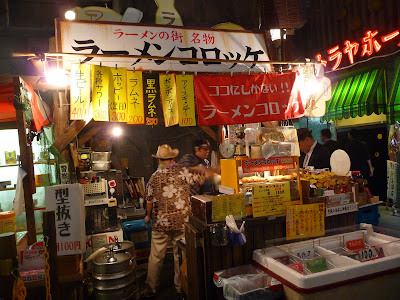 Just in case you want something *other* than ramen to put in your mouth, stalls sell old timey snacks like fried sweet bread, popsicles, and something called "Ramen Korokke" - a potato croquette packed with shreds of all your standard ramen toppings, from fish cakes to bamboo shoots. You can also choose to subject yourself to bizarre soda flavors like kimchi, and while my inner bizarre beverage hound was tempted, I decided to keep my appetite intact. 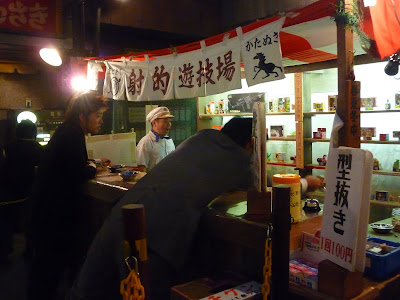 As we sat and watched the ramenathoners line 'em up and knock 'em down at the shooting gallery, T and I took a look at who else was milling around the museum. While the ramen museum is certainly a tourist destination, it was surprising what a large percentage of the clientele had come from out of town. Tour book toting Taiwanese tour groups picked their next shop, as confused looking Thai vacationers tried to figure out which buttons to press to bring out their next bowl. At least one track-suited high school athletic team from the countryside excitedly swept through, and we realized what a smart idea it was to build the museum right near a bullet train station - that way everyone passing through can swing by for dinner before hopping their train home. 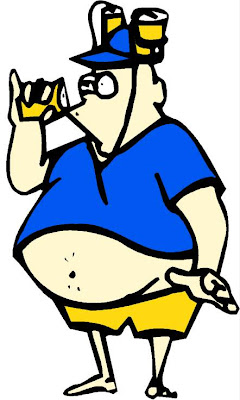 An hour or so later our (increasingly protruding) bellies had caught their second wind, and we sprung to our feet to make our way to the last bowl of the day...
Posted by Nate at 3:04 AM