After letting the booze settle, T and I figured we had just barely enough room in our stomachs left for one more mini bowl, provided we make it a light one. The candidate was clear - the legendary Shinasobaya. 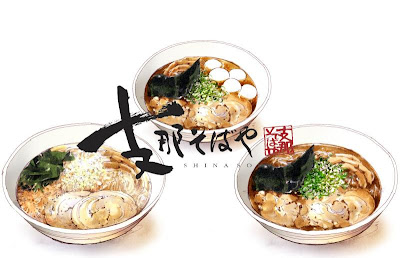 You might say that the new wave of high end ramen started with one man - Sano Minoru. Sano is the feared and revered "Ramen Demon", and his shop Shinasobaya was one of the first to remake and repackage ramen as a classy gourmet food. In fact, Sano envisioned the rupture between his bowl and that of a standard ramen shop's so great that he no longer felt the name "ramen" could act as an appropriate nomenclature for his culinary creation, and he reached back into the prewar imperial period to resuscitate the moniker of "Shina Soba" - a term referring to Chinese noodles that today carries more than a bit of negative racial overtone. 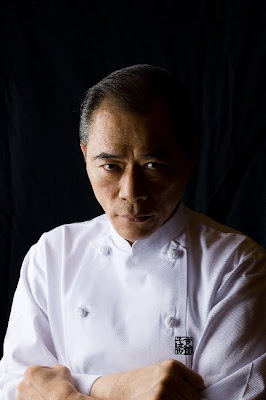 After founding Shinasobaya in Yokohama in 1986, Sano wasted no time in building his own legend. He told of eating ramen while still in the womb, of a family so poor that they could only afford to eat ramen once a year, of beatings from a drunk father that inspired him to become a success, preparing his first bowl of ramen while still a middle schooler and starting his career as a chef just after high school. He earned the nickname "Ramen Nazi" for banning conversation, cell phones, smoking, and perfume in his restaurant, as well as for his legendary temper. Naturally, it didn't take him long at all to become a celebrity, a kind of Gordon Ramsey figure who periodically appeared on television to shout down younger cooks. 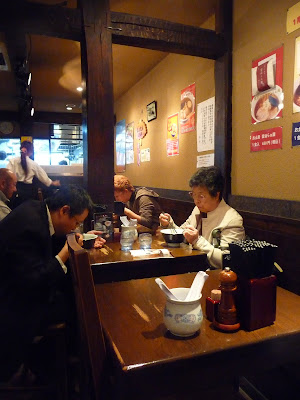 To be honest, I entered Shinasobaya ready to hate it. I knew the reputation, and felt less than excited to buy into a bowl brewed up by an asshole who named his restaurant after an ethnic slur. What can I say, I like to root for the underdog, and Sano is as big a dog as they come, perhaps the single most famous ramen cook in Japan, along with tsukemen inventor Yamagishi Kazuo. We took our seats inside what was not a ramen shop but an old-fashioned soba shop, designed in dark wood with tinkling jazz playing on the stereo. 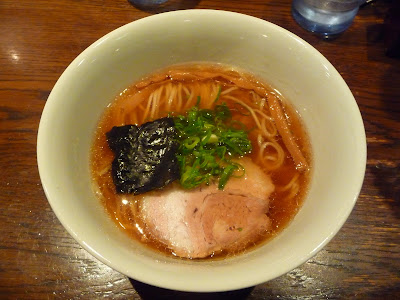 A few minutes later it arrived, the famous bowl that revolutionized the ramen world nearly 25 years ago. It looked so simple, nothing more than straight noodles in brown soy broth topped with a single sheet of seaweed, a single slice of pork, a few onions, and a few cuts of bamboo. And then I took a sip. 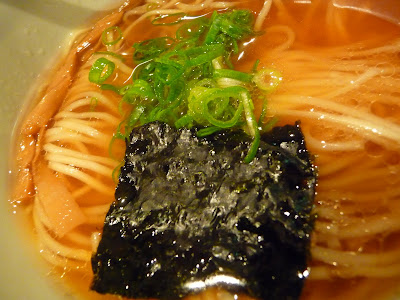 All my preconceptions, my ill will, my doubts vanished. This was a truly delicious bowl of ramen. The soup was so light yet so flavorful, subtly smooth with the taste of chicken, seaweed, and different kinds of seafood all of the highest quality. Shinasobaya is nothing other than on par with the finest foods money can buy. Though I've eaten bowls with more punch, more spirit, and more raw flavor, it's difficult to imagine how the simple shôyu soup could ever be elevated higher than this. 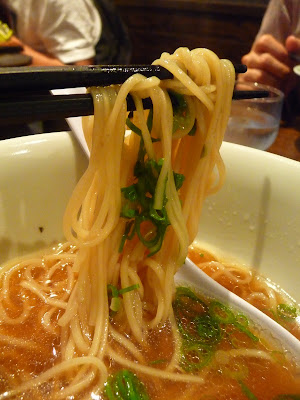 Then the noodles. If you look carefully in the previous pic, you can see that the noodles are not carelessly tangled in the center of the bowl, but instead folded and laid perfectly flat and horizontally parallel. What this means is that with each grasp of your chopsticks you can pull up exactly the portion you want, and each slurp is impossibly smooth, feeling almost like a wheat waterfall flowing in reverse. My hat goes off to the Ramen Demon. 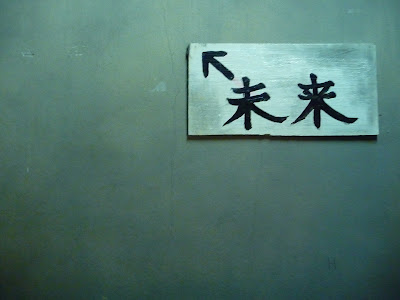 After slurping every last drop of soup in the bowl, we headed back...back to the future. A sign by the stairs marks the way out as a return to the "mirai", the present as future leaving behind the perfectly maintained world of imaginary 1958 Japan. Farewell to eternal sunset and faded signs, and hello to the bright flourescent lights and conspicuous consumption of 2009. 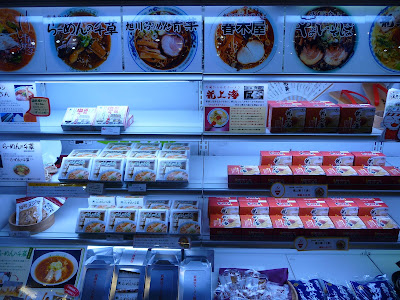 Upstairs is the gift shop, jam packed with prepackaged gift boxes and bowls of semi-raw ramen from the nation's famous shops to prepare at home. Ramen trinkets of all kinds abounded, from keychains to souvenir bowls and spoons, to cell phone decorations and shirts. One thing missing however, was books - I was hoping to find a few new pieces of ramen-related literature, or at least guides, but reading material was not available. 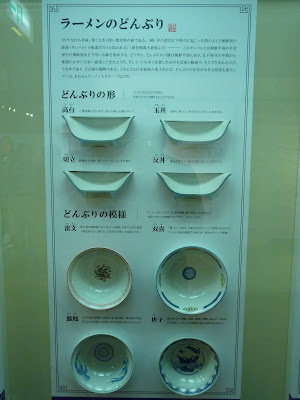 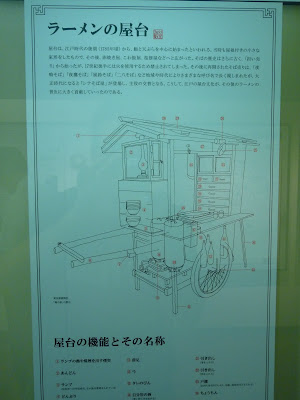 The upstairs area also contains a few proper museum displays - in addition to the ramen chronology (detailed in post two), there are diagrams and cutaways of ramen pushcarts, bowls, utensils, and the like. What kind of ramen detritus will archaeologists of our own future unearth?

Perhaps most interesting of all, however, was the final museum area, featuring a tourist display area on the town of Karatsu in the almost comically backwater rural prefecture of Saga. Domestic tourism is a flagging industry in Japan, and the countryside is rapidly depopulating as the young decamp for cities, leaving provincial towns to rot. Many municipalities do anything they can to attract visitors and interest, and this apparently includes putting in a bid to get your town featured in a corner of the ramen museum. 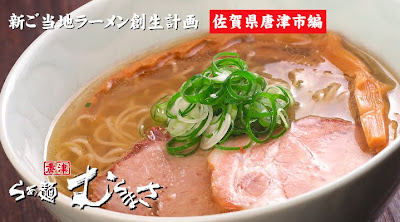 Karatsu is so obscure that it (gasp!) doesn't even have it's own local specialty ramen style. Which means it's up to none other than Sano Minoru to make one up for them. Sano takes on the role of "Ramen Producer", visiting seaside Karatsu and devising a high-end shio (salt) ramen inspired by the ocean to "become" the local specialty dish of this little known burg. 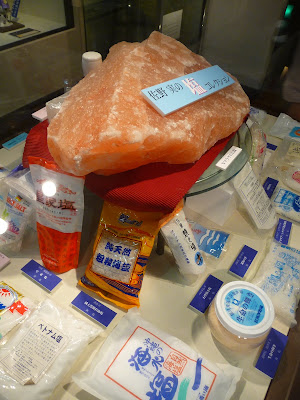 No less than Sano's own personal salt collection is on display, featuring dozens of varieties spanning from sources as broad as the Himalayas, the Iranian plains, the Mongolian flats, the South China Sea, and beyond. Though I have yet to eat at Muramasa, the result of this collaboration between prefectural post station, producer, and museum, I think the concept is rather fascinating in it's own way - get the nationally reknowned tourist site and TV personality to help devise a way to bring attention to your town. Internal capital colonization at work, spurred on by the endless need to distinguish oneself amidst the fray. 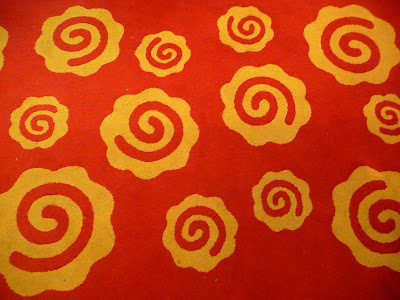 Satiated, we stepped out into the night, passing over the red and yellow rug dotted with swirls that evoke that classic ramen topping, the naruto fishcake. My first visit to the ramen museum provided not just plenty of food, but plenty of food for thought. 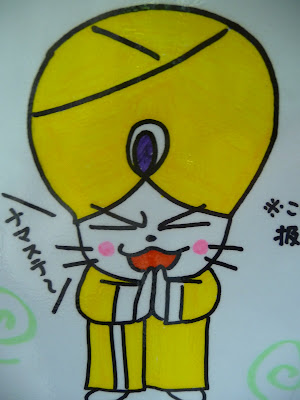 I said "Namaste" to Ramen Cat and headed for the train. See you soon, Shinyokohama Raumen Museum! Next time I'll do five bowls!
Posted by Nate at 12:44 AM