This would probably be a good opportunity to give my proper shout out to a main man in the Tokyo ramen world - Ivan Orkin, head of the inimitable Ivan Ramen. Not only has he given my boy Keizo a chance to follow his dream of becoming a ramen cook, he cooks a pretty mean (ok, really fucking good) bowl of ramen himself. Both Keizo and Brian had paid multiple visits to Ivan, but for any number of circumstances, I had never been. This state of affairs would not stand, man.

Ivan Ramen first opened a few years ago, when veteran chef, noodle lover, and Japan man Ivan Orkin moved back to Tokyo to become the first American to run his own proper ramen shop in Japan. The road was apparently as long as winding as a noodle, but there is no doubt that Ivan has arrived. It's hard to argue in the contrary when you've got... 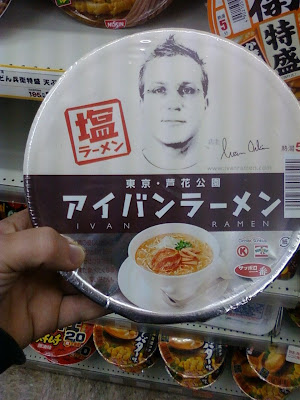 ...your own line of instant noodles sold in convenience stores nationwide. Ivan's been in about every media outlet you could imagine - TV, magazines, panel discussions with other top ramen cooks, the whole kitten caboodle. He's even written a book telling his story, which I have yet to read, so I won't be able to do justice to the Ivan odyssey. For now let's leave it at the fact that this is the best bowl of noodles cooked by a former Deadhead, college Japanese major, trained French chef, Prince-listening, F-bomb dropping Brooklynite. Ivan's a man with a strong philosophy and strong opinions, and is one hell of a dude to shoot the shit with between slurps. 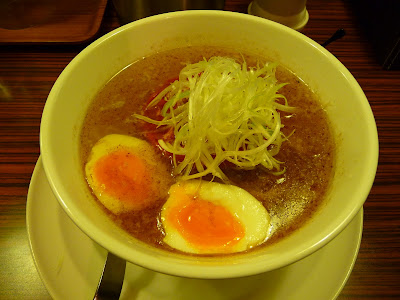 So just what does one slurp at Ivan Ramen? You might start with the shio (salt), a light but complex chicken soup that goes down easy. But there's a lot going on in this seemingly simple soup, and I don't have the training to explicate the spices in this well-balanced bowl. Ivan's is not a bowl that will leave you holding your belly and rueing the three day's worth of oil you just downed. Quoth the main man: "Food should taste good and leave you feeling good." Seemingly obvious words, but it's another thing to put them into practice this well. 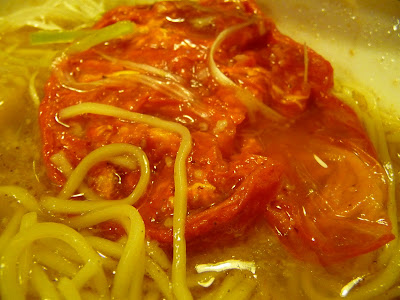 Then there's the toppings. If you make it to Ivan, do not skimp on the toppings. Ivan's French training comes out in the fat slice of roasted tomato atop the soup, and once sweet and smoky. 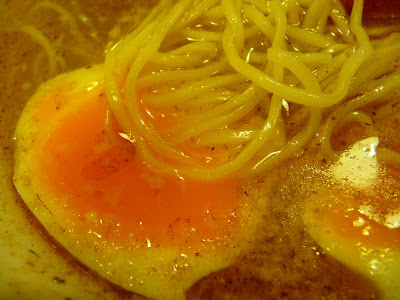 And I don't even want to know how many weeks it took to perfect those eggs, the insides of which are so Platonically gooey. I'm going to refrain from any off-color cracks about the merging of white and yellow. Woops! As for the noodles, they are made quite literally in house, on a shop-owned machine in the attic, which is a refreshing break from all the recent shops that source their slurps from the popular Mikawaya Seimen noodle factory. In addition to the shio, Ivan also dishes out a strong but light shôyu (soy sauce) soup that might be even better, in addition to the even more inventive chili and garlic mazemen (soupless noodles) that I'll no doubt try on a future visit. 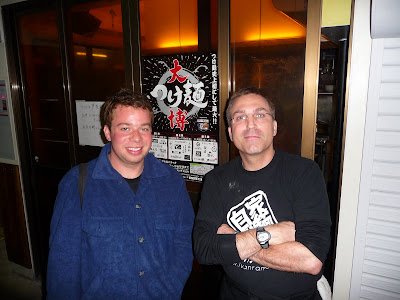 So here's me and Ivan, a couple of neurotic Jews who love their noodles. There's a lot more to this story, but stay tuned for that in the next post!
Posted by Nate at 10:56 PM

Even if you don't like ramen, go for the conversation. It's rare to get such an interesting insight.

hi Nate, nothing to do with Ramen etc, but check out the same hate blog.. some new developments in our Ax book and gekiga efforts!

and keep in touch with directly here please:
sean@boychildproductions.co.uk