Sometimes the ramen comes second. A shocking statement i know, but have i ever been anything than truly honest with you? Brian had scored a coup and downloaded the first few episodes of the new season of Curb Your Enthusiasm, and this bowl of ramen came as a precursor to sitting down to watch Larry David put his foot in his mouth for the umpteenth time. 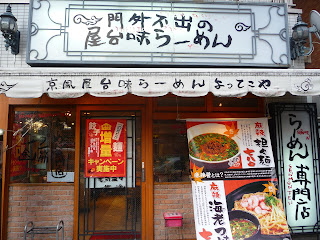 In Komagome, not too far from Brian's pad (and I do mean pad, you should see the setup!) is Yottekoya, a branch of national chain with far too many franchises. Yottekoya ostensibly specializes in Kyoto-style ramen, but unlike the refined courtiers from the old capital, they've taken a few plays from the "please all the people all the time" book. The sign says "Kyoto street-stall style ramen," so why does the banner out front advertise spicy tantanmen and shrimp tsukemen (dipping noodles)? They're definitely aiming for the biggest possible draw, which might not be so surprising, considering that the name means something like "Come on over!" in Western Japanese dialect. Or, to put it in the parlance of our times:

Inside, the main choice one is confronted with is between the "Red Gate," "Black Gate" and "White Gate." I've heard of the Suzaku Gate in Kyoto, and of course the famous Rashômon Gate, but these were new to me. The white is the standard soup, a tonkotsu (pork bone) and chicken blend, and the black is the same with a dash of mâyu (burnt garlic and sesame oil), which in the red is replaced with a generous layer of bright crimson chili oil. 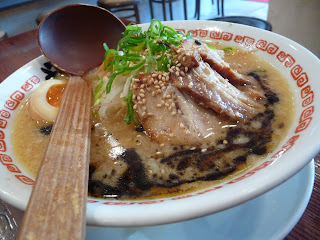 Brian went with the black, which despite being tasty enough, didn't really seem to have a whole lot to do with Kyoto ramen. There's no refined elements to this classic capital dish - Kyoto marks the eastern front of the Western Japanese ramen zone, which is largely based in greasier and fattier pork broth rather than the chicken, seaweed, seafood, and soy that constitute the base in most Eastern styles. The basic elements were there at Yottekoya, but the trademark thick, almost gravy-like grittiness of the soup (as at Tenka Ippin) had been substituted for small bits of floating fat, giving the overall impression of a knock-off Kyushu tonkotsu rather than constituting the mikado manifest. 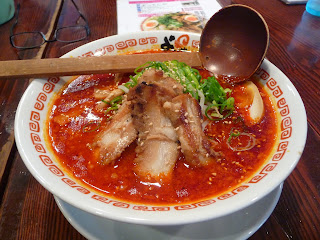 I got the red, which was laden enough with pepper oil as to be essentially unidentifiable as Kyoto ramen or even really ramen at all. If you put that much salt, fat, and spice in anything it'll taste good, but the overall impression was of a Korean dish, maybe a chigae soup more than anything else. Granted the Kyoto-Osaka area is home to Japan's largest population of resident Koreans, but I don't think that was a conscious factor in Yottekoya's menu writing process. 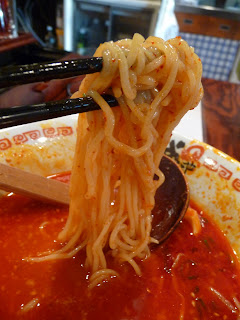 So far, so serviceable, but Yottekoya's noodles were truly an embarassment. They were thin, cheap, characterless, and seemingly right out of the package. They were so weak as to be almost clear, which reinforced the overall Korean feel to the bowl. After about three bites I leaned over and remarked "I call bullshit on these noodles man," to which my companion readily agreed. Though truly amazing noodles can make good ramen great, after a point they cease to matter as long as a certain minimal standard is met. Yottekoya did not meet that standard.

We got full, but both agreed that Yottekoya's had been the weakest bowl in a while. You can find great ramen at some chain shops (like Hakata Tenjin or even Tenka Ippin), but Yottekoya's bowl just tasted too mass-produced. I'm not going to say you'd be better off eating your shoe (ask Werner Herzog about that one), but there are plenty of superior options around town. The ex-Kyoto resident in me resolved to continue the quest for a more legit bowl of miyako munchies.
Posted by Nate at 10:24 PM