There I was, lost in the middle of Kabukichô, Japan's biggest red light nightlife district. But don't get the wrong idea. It was 11:30 AM, and I was shielding my eyes from the sun as I searched out another shop to grab a quick lunch. In Kabukichô you're never far from a sketchy nightclub, a big hairdo, an overpriced bouquet of flowers, or a low-level Yakuza tough. But you're probably just as close to a bowl of Hakata-style tonkotsu (pork bone) ramen, which seem to be located on nearly every corner of this den of men. 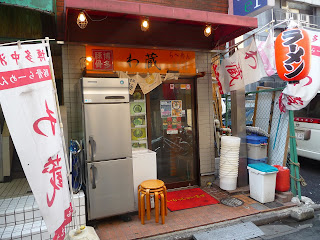 Left to their own devices, dudes will eat the food that is worst for them. It's science. Ergo, plenty of ramen made of melted pig marrow in this town. Some of the best Hakata ramen in Tokyo can be found in a lean-to between cabaret clubs, and the always trusty Hakata Tenjin can satisfy a salaryman's beer-fueled craving in a matter of minutes. But I figured I'd try a new place this time, and Wakura was in a dirty enough tucked away corner that it just might be great. 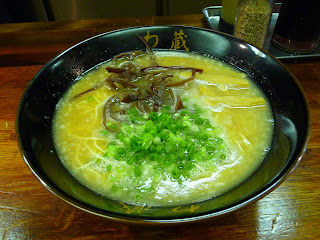 What see you at Wakura is what you get, a straightforward bowl of Hakata ramen with no frills. The shop advertises a founding date of 1954, but the lineage seems questionable - the head shop is in Itabashi, Tokyo and not Fukuoka, and the history hinges (as it so often does) on the interpretation of the word "tradition" - does "Hakata denshô" mean "traditional Hakata ramen" or "ramen in the Hakata tradition"? I feel like a solid bowl of Hakata ramen should be a bit whiter in the soup and a bit creamier, with the fat worked into the soup rather than floating on the surface. 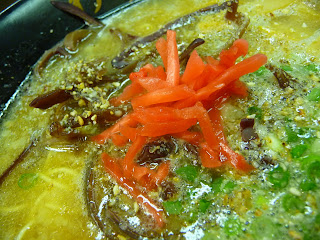 I tricked it out with toppings, but was a bit miffed that they wanted extra cash for spicy takana (mustard greens), which should be standard at a joint like this. Why pay seven bucks for a proper bowl when you can get the same thing made better down the block at Tenjin for just five? Wakura was in no way bad, just totally plain and a bit thin. In Japanese you'd say "futsuuuuu." Even mediocre Hakata ramen hits the spot, but this was just that and nothing more - mediocre. 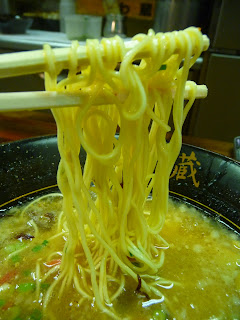 They did get the noodles right though, offering a full list of boiling options, ranging from an extra soft boil of 60 seconds to the toothsome "kona otoshi" - knocking the flour off with a two second boil. Mediocre as it may have been, I still got a kaedama (second helping), which I slurped down as I listened to an off work hostess beg her big-haired boyfriend not to make her eat any tonkotsu ramen. "Oh my god, if I take even one bite, I think I'll puke. It smells terrible, oh my god. Baby, I'm not gonna order this, you can eat the ramen if you like, I'll just get some rice and pork. Why do you like this stuff? I swear I'll puke, I'll puke." The ramen/gender stereotype playing out in a nutshell. Just getting to listening to that exchange might be worth the price of admission.
Posted by Nate at 3:05 AM