I was about to leave for a three week vacation in California, and I wanted to make my last bowl count, so Ramen Adventurer Brian and I met up for final slurp before I took off to the land of sun to pack my belly with burritos, tortas, and vegan sandwiches. We bandied about suggestions for various places that had piqued our interest, and settled on Shodai Keisuke, the shop that set the groundwork for the burgeoning empire of up and-coming ramen impresario Takeda Keisuke. 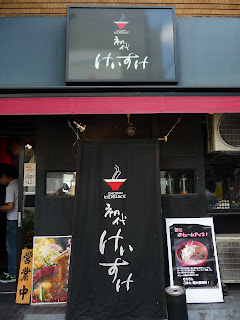 If I had to pic a favorite celebrity ramen chef, I think I'd go with Takeda. He strikes me as thoughtful and careful without being overly self-promoting. Taishôken's tsukemen (dipping noodle) inventor Yamagishi Kazuo is a cuddly grandpa but a bit of a one-trick pony, Nantsuttei's Furuya Ichiro is too much of an egomaniac, and Shina-soba's Sano Minoru strikes me as an uptight asshole, but I dig Takeda's vibe. He spent ten years as a classically trained French chef, but chose the ramen world for the freedom iof experimentation it allowed. To date, Keisuke has opened four shops, each based on a different concept - as a graduate student, I have to admit I'm attracted by his methodology - highly theoretical yet ultimately satisfying. 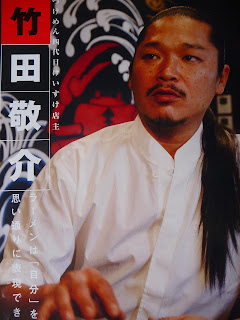 Shodai ("First Generation"), a stone's throw from the gate of Tokyo University, serves a burnt black miso ramen, Nidaime ("Second Gen") in Takadanobaba offers a shrimpy soup topped with prawn wontons, Sandaime ("Third Gen") is located in the Western suburb of Tachikawa and focuses on fragrant oils, basil, and garlic, while the newly opened Yondaime ("Fourth Gen") in Hon-Komagome peddles pan-fried "bricks" of tsukemen served with a lobster-based dipping sauce. The dude has imagination...and impeccable taste. 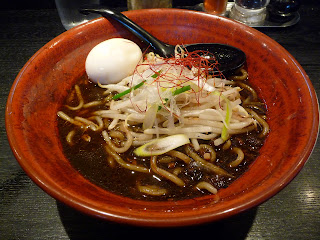 So far I've only hit shops 1 and 2, but 3 and 4 are high on my hit list. Homeboy knows he has fans and he treats them right - for 300 yen you can get a member's card that entitles you to free toppings! 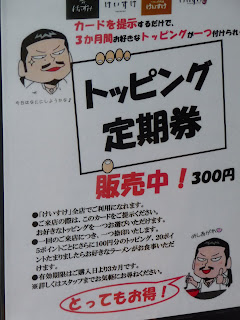 Just one glance at the bowl tells you that you're in for something rich, tasty, and satisfying. Though not as deep-night dark as the even more upscale burnt miso ramen at Gogyô, great care has clearly gone into Shodai Keisuke's broth. Smoky, sweet, strong, and salty, all it took was one sip to make us say "dayum!" Keisuke's broth has almost nothing to do with standard Sapporo miso, but is a creation all it's own - I wouldn't be surprised if some unorthodox flavors from Keisuke's French chef days found their way into the broth - but of course, that's probably a house secret. I still don't know what the hell those little red slivers are though. 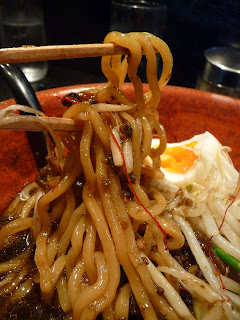 And then there's the noodles. Of the hundred-some-odd bowl's I've eaten in the past year, Shodai Keisuke's noodles rank in the very highest tier. Extra thick, each noodle seems to have its own unique set of curls, and the wheat is extra chewy with just the right amount of give, holding up admirably to the strong soup. I can't praise this stuff enough - Shodai Keisuke's ramen is in the upper echelon of the Tokyo ramen parthenon, geographically inappropriate metaphor be damned. I can't wait to see what this ramen genius' next move is!
Posted by Nate at 1:41 AM

Yeah, I need to invest in one of those member's cards.

I think the red slivers is saffron. That ramen looks vastly different to what I experienced when I visited Japan - I have got to go again...