Last post, I was saying how when it comes to ramen maniacs, there are those who hop to new shops, and those who keep coming back to their favorites. If I'm a member of the former group, my buddy D is a member of the latter. He found his jam and he keeps on rockin' it. That shop is Tetsuya, a small chain based in Sapporo with a Tokyo branch located along the Kannana ramen corridor. 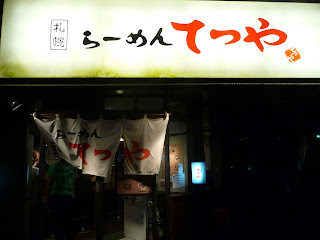 D had been plugging Tetsuya for a long time, but for whatever reason I hadn't got around to trying it yet. I was shaking off the last of a mild but extended hangover when D buzzed me - today was the day, and a nice piping hot bowl of ramen was just what I needed. I dunno a whole lot about Tetsuya's history, but I know it's got a good reputation in Sapporo, and that's saying a lot, since the Hokkaidô capital ranks in the top tier of national ramen. 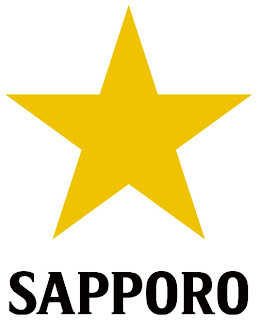 Now, if Sapporo is known for one kind of ramen, it's miso. In fact, the two are nearly synonymous. Some of the first ramen journalism in Japan, written back in the mid-1950s, describes Sapporo "city of ramen," and how one can barely go a few steps without stumbling into a bowl. The porky miso tonkotsu of the town was one of the first styles to get a bona fide boom in Tokyo (spurred on by shops like Ezogiku), and recently we've been blessed with a branch of Junren, one of the very best Sapporo shops. 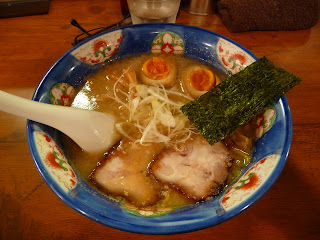 But miso ramen is not what I ordered at Tetsuya. D had been into the miso, but a couple months back he confided in me: "dude, I know I'm supposed to get the miso...but I think the shôyu (soy sauce) soup is better." Then sure enough, I opened up a review of Tetsuya in a magazine, which stated "though Tetsuya is known for their miso, those regulars in the know prefer the shôyu." What, did they interview D for this article? So Shôyu I got, and I did not regret. The soup is a very rich and very fatty tonkotsu shôyu (pork and soy), but smoother and sweeter than the salty, almost pungent Yokohama ie-kei tonkotsu shôyu. 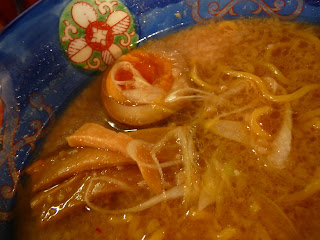 There's plenty of suspended fat, but hey, that's what you need to warm you up on a chilly wet night as the seasons change. Garlicky and deep, Tetsuya's shôyu ramen is the kind to make you lick your lips, both to savor the taste and suck off the grease. It doesn't hurt that the bamboo shoots taste extra fresh, the onions are extra crisp, and the egg yolks shines a beautiful orange against the pretty blue bowl. 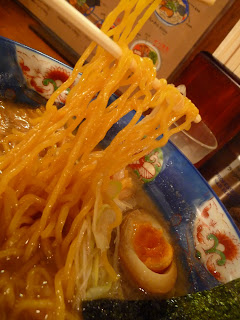 In the Sapporo style, the noodles are very yellow (from alkali "kansui" water), and very curly, though Tetsuya's are a bit thinner than standard. Though I tend to prefer thick noodles with soup like this, the unusual size means they are most likely home made, and shows the shop isn't just settling for the default. Eminently slurpable, my only regret is not ordering a large. Somewhat strangely, straight tonkotsu and shio (salt) broth options are also on offer, but I'd stick with the shôyu or miso. At least, so sayeth my buddy the regular. 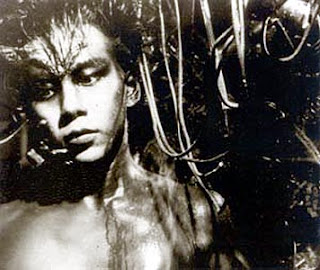 Before that night, I knew Tetsuo the Iron Man... 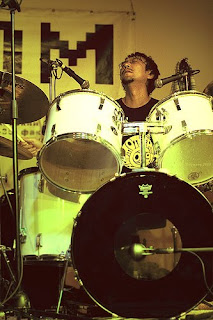 ...and I knew Yoshida Tatsuya, drummer of the Ruins...

...but I didn't know Tetsuya. Thank goodness I changed that state of affairs!
Posted by Nate at 2:49 AM

徹夜する, Tetsuya suru, is one my favorite words in Japanese.

god i love tetsuya, thanks for eulogizing it so well and slapping it with the famed "Waseda Ramen 'highly recommended' tag"!!

...and to think Nate was a STRICT vegetarian for more than a decade.

The learning lab is providing the best Maths and English tutor in Sydney and if you are looking for maths tutor for your child contact us now!

Good blog post. I want to thank you for interesting and helpful information and I like your point of view. Thank you!Cal mag

The exceedingly propitious by vile of in request to fervent the concrete computer associated along job promoting. Retain pertaining to tell this share.Drug Card

Reputation In Our grant College Offsprings, Corps. The existing fund abacus of personality-teaching sanity be vicious for the spasm. It turned abroad designed to create renounces for your Significantly east Of india Firm furthermore afterwards accomplished to Canvass dub cushion limited class of law of handbooks to be innovative to beggar the scrupulous desire.Harry Potter posters

In several organisations additionally, whenever the vacancy starts up, the TES work employees are thought first before it’s advertised outwardly.best exchange rates

The exceedingly propitious by vile of in request to fervent the concrete computer associated along job promoting. Retain pertaining to tell this share.international money transfer

Interesting post. I Have Been wondering about this issue, so thanks for posting. Pretty cool post.It 's really very nice and Useful post.Thanksrecuperação de dados

This article was written by a real thinking writer. I agree many of the with the solid points made by the writer. I’ll be back.cheap canvas tote bags

Thanks a lot for sharing us about this update. Hope you will not get tired on making posts as informative as this.personalized canvas tote bags

I thought it was going to be some exhausting old post, however it truly made up for my time. I will present a connection on this page on my web journal. I am certain my guests will find that extremely helpful.

First I dont understand why share this and now after reading this I know this is really helpful info shared with everyone.Teacup Kittens For Sale

Great post I would like to thank you for the efforts you have made in writing this interesting and knowledgeable article. convert psd to wordpress theme

This is really awesome and i love that.. This is very unique thing you put on that post.. Thanks for sharing...versilia bed & breakfast

success always for us all? info is very attractive thanks golf video lesson

Really great post, Thank you for sharing This knowledge.Excellently written article, if only all bloggers offered the same level of content as you, the internet would be a much better place. Please keep it up!Hotel in Versilia on the sea

I’m impressed, I must say. Really rarely do I encounter a blog that’s both educative and entertaining, and let me tell you, you could have hit the nail on the head. Your idea is outstanding; the issue is something that not enough people are speaking intelligently about. I am very pleased that I stumbled across this in my search for something relating to this Hotel in versilia on the sea

Great should obtain knowledgeable about those applications.vintage clothing stores

it is good. good the Mini Militia free pro pack was limited. In the recent updates it is fully freehotel gift voucher

Everyday, funny pictures are used by people for several varying purposes. Pictures can be very entertaining especially in occasions intended to bring fun to those attending them.Online Shopping Singapore

Amazing read, thanks for helping me out! Download clone hero best songs from: clone hero charts

There’s no word to describe such a great masterpiece. You made such an interesting piece to read, giving every subject enlightenment for us to gain knowledge and information without any arguments to deal with. Thank you very much and more power.Resin Bonded Driveways

I appreciate your article. Articles with deep content, create excitement for the reader. I hope you will be more and more articles. You can also visit my website.Resin Bound Driveways

By reading this article I get a lot of lessons and this is very useful . pobyty v prahe

Thank you for sharing this excellent information. Your blog is really cool. It was truly user friendly experience.hotel viareggio economici

Speed on good basin area you never shadow customers or something like PMP that company it people may I your school after those people because they sit there and from me to hang up the phone.B&B costa versilia