This day was a long time coming. The original Ramen Jirô, located in Mita. Some have been known to call the gargantuan, oil-soaked bowls at Jirô "something other than ramen, a unique food called only Jirô." But that doesn't make the original Mita location any less of a mandatory place of pilgrimage for anyone aspiring to the title of true ramen fanatic. I had eaten plenty of bowls of Jirô in various locations in the past, but had never paid homage to the first and foremost, the monster, the colossus, the progenitor.

The occasion was the renewal of my visa, and I decided that there was no better way to celebrate my continued stay in Japan (and my triumph in a months-long process of bureaucratic wrangling) than with a big greasy bowl of noodles. At 10 AM. 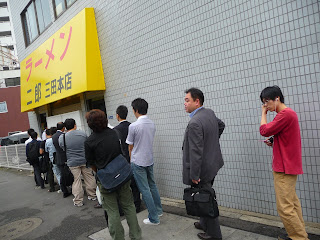 Because 10 AM is when Jirô opens its doors and starts dishing out the day's bowls. But don't think that you'll have the place to yourself for a relaxed ramen breakfast. Jirolians (for that is what devotees of Jirô are called) start showing up well before the shop's shutter comes up, hoping to avoid the famous lines to get in, which rival even Jirô's portions in their gargantuosity. My timing was perfect, and the first batch of customers was just finishing up as I arrived, and I only waited about 4 minutes, probably the shortest recorded time ever for a Jirô visit. By the time I left (and this photo was taken) at a quarter to 11 AM, the line was already 25 long. Don't even think about showing up anytime after 2.30 PM, as the day's soup will be long gone. 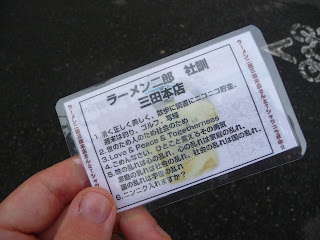 On the way in I picked up a laminated Jirô membership card listing the shop's six guiding principles: 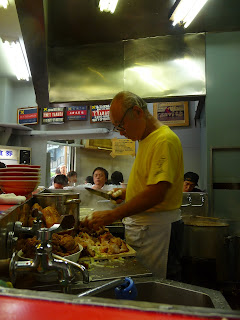 The man behind the maxims is Yamada Takumi, the boss of Jirô, the one who started it all back in 1968. At this point, the shop's story of is well known, having been covered by NPR, various newspapers and magazines, and countless blogs. The shop won the hearts and bellies of students at the nearby Keio University with its massive portions, each trainee of the master went forth and spread the legend (and the lard), and now there are over 20 Jirôs all over the greater Tokyo metropolitan area. In just the last two years or so, Jirô has ceased to exist as a cult phenomenon and has caught the attention of the general public. Imitators now abound, each doing their best to copy Jirô's massive bowl piled high with thick noodles, mountains of bean sprouts and cabbage, cujungous cuts of pork, and generous blobs of fat all suspended in a rich tonkotsu shôyu (pork bone and soy sauce) broth. But there's only one original, and this is it. 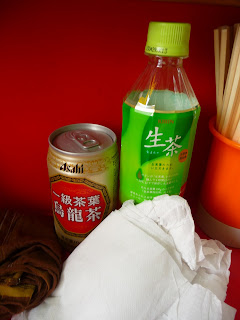 While not the same level of Jirolian as the writer of Ramen Tokyo, who has made it his mission to eat at every last Jirô location, I'm seasoned enough to know to come prepared. I was ready for battle - a bottle of green tea, a can of oolong tea, a handkerchief for the sweat, and a generous helping of toilet paper procured from the bathroom at the immigration office to use as napkins. I was feeling good. This was to be my day at Jirô. I kept my eyes peeled for the appearance of "Al Qaeda," the pigeon that has been known to take lodging in the shop's rafters. 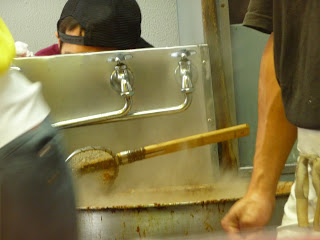 I sat at the famous red counter, watching the master do his work. My eyes kept returning to The Vat, the bubbling cauldron overflowing with sundry pig parts, from whence my bowl was to emerge. The silence was near total, with the customers maintaining a reverent quietude while in this temple of the noodle. The only sound was that of slurping, occasionally punctuated by the incantations known to every member of the cult of Jirô - when the shophand asks "you want garlic with that?" the Jirolian replies with the names of the toppings he (and trust me, it's usually a he) wants - ninniku (garlic), yasai (extra vegetables), karame (extra salty and tangy soy essence), and abura (pure lard). Just saying the name of each will give you plenty, but if you're up for the challenge, toss in a few shakes of the word "mashi" to double or even triple the quantity. 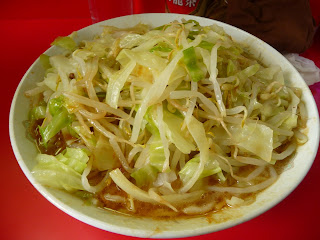 And then it arrived. Being sans roast pork cuts and with only the standard amount of vegetables, my bowl may have lacked the voluminous verticality of some, but there's still 300 grams of noodle under there, which is no trifling amount. I took my first sip and my first bite, eating slowly not only to savor the moment but as a part of a strategy to make it all the way through. Some say the true secret of Jirô is in the soy sauce used for the soup base - sourced from Kaneshi Shoji production house and made specially for Jiro, it has an almost sweet, salty richness incomparable to your average shôyu-flavored bowl.

But then, just as I was lowering my bowl from the counter, the unthinkable happened. A girl walked into the store. A young, thin, unaccompanied, fashionable girl. She might as well have been a conehead, fresh off the spaceship from Remulak, so much did she stand out among my sweaty fellow slurpers. When asked "you want garlic?" she replied by asking "oh, is it good with garlic?" A chuckle ran through the room as the old man laughed and replied in the affirmative. The girl, sitting right next to me, made grunts of satisfaction and pleasure as she began eating, and I considered trying to chat her up, but decided against it for fear of breaking the room's reverent silence. 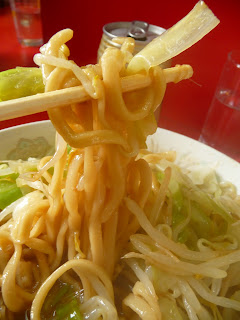 I worked my way through the noodles, those thick, wheaty, rough cut noodles that never seem to decrease in volume no matter how much you eat. I was still feeling good. I was going to make it, I could feel it. The girl to my left, however, was not so lucky, as she seemed to have entered the shop without knowing what she was in for. After finishing about a third of the bowl she started slowing down, before finally lifting her bowl to the counter and uttering "Gibu appu." Give up. She asked old man Yamada if anyone without a Y chromosome had ever finished the bowl, to which he again chuckled and replied in the affirmative. She apologized profusely, vowed to come back to challenge again after further training, and left the store, leaving in her wake a flurry of chatter and giggling in disbelief. 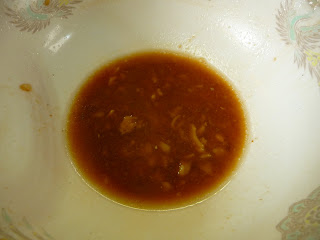 Undeterred, I kept my pace steady, working my way through the bowl, and deciding that if ever I was going to go for the gusto, this was it. I drank the thick oily soup down to the dregs, completing my Jirô challenge. I was shocked to realize that for the first time, Jirô had become something I could eat without major physical difficulty, and my pile of toilet paper stayed nearly untouched. Granted, I skipped the pork, which constitutes a great deal of Jirô's black diamond difficulty, but I felt that next time I might even try and tackle a large bowl. For what I had was only the small size. But, as absolutely delicious as the original Mita Jirô is, I think I prefer the Takadanobaba branch. Maybe it's just my Waseda-area pride showing, but the bowl in 'Baba seems that much bigger, burlier, and rougher than its father at Keio. 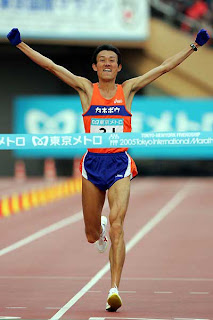 I lifted my empty bowl, shouted my thanks to the cooks, wiped the grease off the counter, then stepped out into the morning sun, leaving behind the little triangular corner shop and the megalithic line that had grown outside. I just read the story of a ramen writer who ate at four different Jirôs in a single day. That's pretty unthinkable, but I had won the day nonetheless. I stumbled along holding my stomach, and spent the next hour walking across town in a fruitless attempt to walk off the (oh so sweet) pain and the pounds. As I shambled through the town, I muttered the only word that I could manage to get through my lips. Jirô. Jirô. Jirô.
Posted by Nate at 10:45 PM

The pork is, to put it bluntly, not pork. Instead it should be referred to as pig flesh.

That's one of the most moving ramen blog posts I have ever read.

Get Your visa renewal done in less than 3 hours from the time you make your embassy payment.
us visa renewal for getting your visapayment after processing your application. we deal with american USA visa renewal services in India mainly in Hyderabad Delhi Mumbai Chennai kolkata.