This year may have been declared the year of miso ramen by leading ramen critics, but I hadn't been doing much of my part in appreciating the glories of soup based on that lovable brown soybean paste. After going to Junren (on multiple occasions), I had essentially decided that no other miso ramen in Tokyo could ever surpass it. But I needed to rectify my old-style thinking - the whole point of the critics calling attention to miso is to show how much more there is to the genre than just Sapporo-style soup and weak attempts to imitate it. But, rather than submit myself to Stalinist self-criticism, I decided to go out and see what the fuss was about. 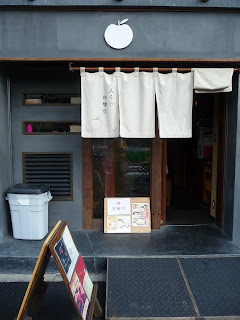 The closest shop in my sights was Miso-ya Ringodô (House of Miso and Apples), located along Yamate-dôri just south of the Higashi Nakano train station. Ringodô has been open for a little over a year and blends its house-mixed miso with a soup made from pork stock and vegetables melted down into a pottage. In the evenings the young master switches the banner out front and reopens as Apple Basic, a pretty standard-looking tsukemen shop. Why the cook is so into apples remains a mystery - I'm pretty sure a bowl of ramen a day won't keep the doctor away though. 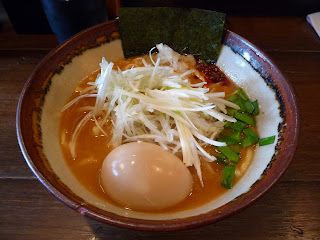 Ringodô's soup may be miso, but it's clear from the start that it shares almost nothing with the classic Sapporo-style. We get three kinds of onions - diced white, chopped greens, and crunchy shards of "long onions." The variety keeps the bowl interesting, with enough toppings to make every bite different. Though I passed on the meat, there are also two kinds of pork - grilled to a glaze standard châshû cuts as well as smaller diced bits. As for the soup itself, it's what would be called "dorodoro" in Japanese - thick, gooey, and slowly dripping. This is a good thing. Rather than use "tare", the liquid flavor essence that goes in every bowl, the cooks at Ringodô dump in a fresh scoop of miso to mix into the broth. The result is rich and slightly sweet - maybe some apples are in there after all? 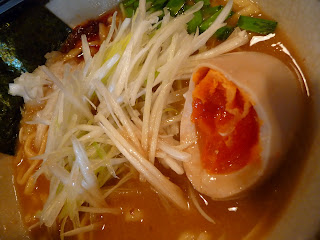 Ringodô takes an almost embarassing amount of pride in their eggs, which they claim are the same used in the most high-end luxury restaurants. They certainly are good, staying just soft enough on the inside, with a nice orange yolk. And see that little dab of red in the corner? I don't know what kind of chilis are in it, but it bangs. I passed on ordering my noodles spicy, since occasionally a shop's cheap chili oil ends up masking the flavor of the broth, but I instantly regretted not getting the hot stuff at Ringodô, since this sweet, smoky, and strong paste made my tongue tingle. 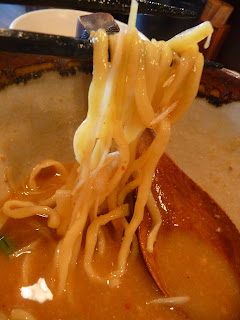 The noodles are medium thick, and less yellow, alkali, and eggy than the standard curly noodles of Sapporo miso. They're sourced from Mikawaya Seimen, which I've noticed seems to be one of the major go-to noodle providers for many of the "higher-end" ramen shops around town. Nice and chewy, they held up well to the dense soup, but in the end it's tough for them to stand out since so many fish-broth brands around town are using the same ones. 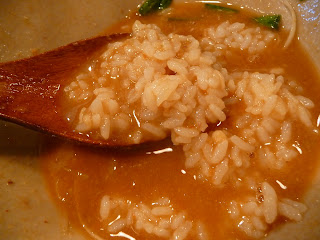 The shop staff kindly offered me a free side of rice to compensate for lack of pork, and the remaining broth and onions made for a great stew. Too bad it's not midwinter yet! 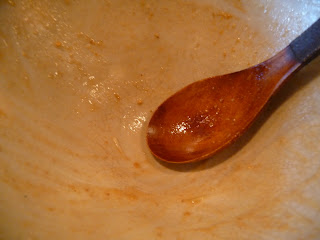 You best believe this was another bowl dusted off to the last drop. I have been on a roll of late, and it seems like every shop I'm hitting has been absolutely delicious. I think I may find myself back here pretty soon - I'm itching to try their extra spicy soupless noodles!
Posted by Nate at 10:38 PM

But humor seemed to always keep us sane, and our connections to each other also really helped.icustomtshirts