My pal H was busy for the day, so she asked me to show around her pal D, who was visiting from the States. It was pouring rain, but we spent the day wandering around the relaxed Chuo line neighborhoods of Nakano, Koenji, and Asagaya and taking in the slow side of Tokyo. It seemed that my reputation preceded me, so when hunger struck at midday, there was no question that ramen was on the menu. I whipped out one of my trusty mags, and we set off for the heretofore unknown shop of Mine (which is pronounced as if there was a little french accent mark on top of the "e"). 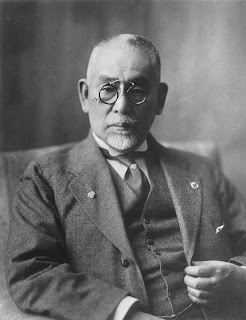 Mine is located just north of Koenji station along Kanana-dori, the famous "Number 7 Loop Road" encircling suburban Tokyo. The plan for a series of Tokyo beltways was divised by a certain Viscount Goto Shinpei, mayor of Tokyo and Home Minister in the early 1920s. Homeboy also founded the Japanese Boy Scouts. Goto was in charge of city planning after the great earthquake of 1923, and devised a series of ring roads not unlike those Beijing has today. But the plan never came to full-fruition, so we ended up with Loop Roads 7 and 8, but only partial circles further in. In any case, Kanana is home to more than its fair share of ramen shops, since when you're on the beltway and hunger strikes, you can't be troubled to head into town. Some other Kanana shops include the always awesome BASANOVA, and O.G. tonkotsu purveyor Nandenkanden. 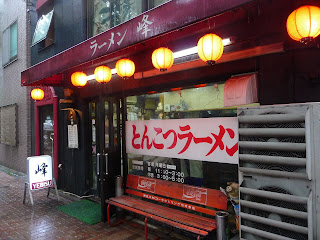 Mine is definitely the kind of ramen shop you want to take a Tokyo novice to, at least, if you want to show him what the very image of an old school ramen shop looks like. Nothing reconstructed here, just a ratty old counter with a hefty old man and a heftier old lady slinging pork parts for the masses. 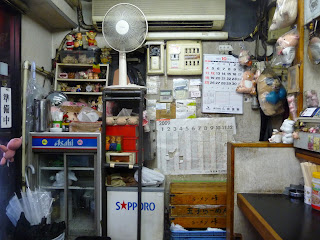 The place hasn't gotten a good drubbing in what probably amounts to years, but hey, when you're a mom and pop ramen shop, that's by no means a bad thing. If you look closely, you can see the proprietors have amassed an impressive collection of pig-themed knick knacks. Wiiiiiilllbuuuur! 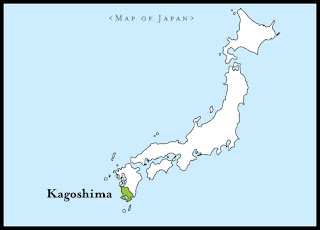 The phrase "I felt like I was in some far-flung countryside ramen shop" definitely applies, but what particular far-flung corner of the countryside are we talking about here? Kagoshima! The southernmost prefecture in Japan aside from Okinawa, Kagoshima is known for its sweet potatos, sweet potato vodka, unintelligible dialect, volcanoes, and oh yeah, black pigs. Formerly known as Satsuma domain, Kagoshimian dudes helped lead the Meiji Restoration to birth Japan as a modern nation-state in the mid 19th century. But don't hold it against them. 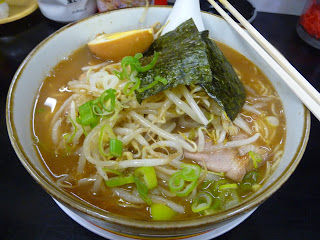 Kagoshima ramen may be based in pork, but it's notable as the only style of ramen (ignoring the outlier of Nagasaki champon) from the southern isle of Kyushu NOT to trace its lineage back to the town of Kurume. As a result, the soup is less greasy and less creamy than the more famous ramen of Hakata, since more soy sauce is used, and the base broth is a mix of pork, chicken, and veggies. My boy Keizo has the haps on Kagoshima ramen from his recent trip. The bowls we got were decidedly rustic and fitting for the setting. 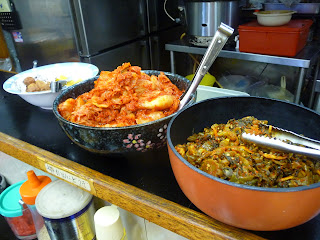 Kagoshima ramen does however, share its regional cousins' predilection for free toppings, and Mine takes this one whole hog, as it were. There are of course the mandatory spicy pickled mustard greens (takana), house-made kimchi that was at least as spicy as the cook warned me, garlic, sesame seeds, black pepper and more. If you want, there's an option to pile on fat cuts of stewed Berkshire pork. Up yours, David Chang, you didn't come up with anything new. 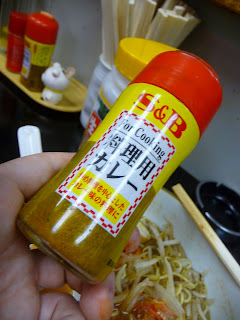 And one I hadn't seen before - curry powder. Whuuu? There's enough on the table that you could try a different topping with every bite, changing the flavor of the soup over and over throughout the meal. 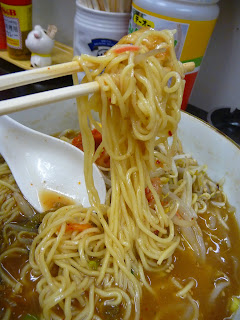 Don't worry, you'll have plenty of time to do so, because the staff at Mine are, pardon my french, not fucking around with the portion sizes. About 600 yen gets you a massive lump of noodles topped with ultra-thin pork slices cut from a specially rigged pork shaving machine in the back. But here's where Mine runs into trouble. Kyushu ramen noodles, extra thin and extra white, should also be nice and firm. As a result, most shops serve small portions to keep the noodles from getting soggy. If there's not enough for you, plunk down a buck and get a noodle refill. Mine's soup was a welcome change from your typical pure pork Hakata broth, but man, the noodles sure did get soft by the end. They may have even started out soft, but I'll give them that one, since I've heard that such is the style down south. We were both completely stuffed to the point of rolling out the door, and apologies may have been made for the newcomer American who had to leave a few noodles in his bowl (don't worry D, it happens to everyone once). The salty mixed soup was tasty, but I can't give full stars to Mine due to those soft noodles. Bonus points for the atmosphere, though.
Posted by Nate at 12:42 AM

Thanks for the shout-out! I'm honored to be included in these hallowed pages. And now I'm craving ramen. You should do some NYC ramen posts next time you're in town.