Now, here's a real ramen adventure. Brian buzzed me to grab a bowl and asked me if I wanted to go to a place called 69 Rock N Roll One. "Absolutely I do," I replied without hesitation. I mean, with a name like that, what was I gonna do, NOT agree to travel any distance to eat there? "Any distance" was definitely the distancein question as we boarded the Odakyu express train to travel to the far-flung suburb of Machida, a full half hour from central Shinjuku. 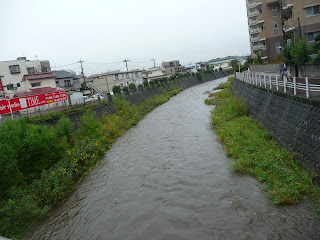 Essentially mapless and clueless, we began wandering from the station. We crossed a river... 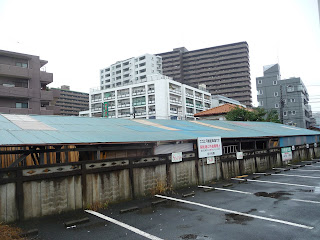 ...found a deserted parking lot with an address matching the one we had for the shop... 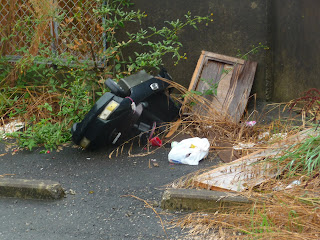 ...and found a kiddie car that had seen better days, but still no sign of noodles. Rock N Roll? Did I mention that it was raining? 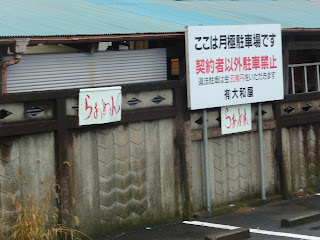 Butt wait! Take a closer look at that parking lot. I'll be damned if that isn't a hand painted sign marked "ramen" on one of the parking spots behind the lumber warehouse! We rounded the bend, searching for our reward... 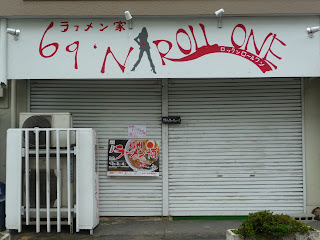 Sorry kids, the cook has taken his rockabilly hairdo and gone to Nagano for the weekend for a countryside ramen festival. Heinously stymied! What are a couple of hungry dudes to do? 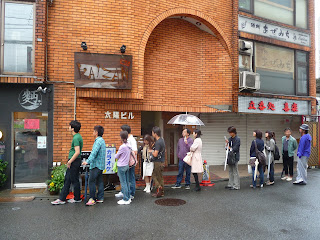 Gugutte mimashita! Translation = google that shit on our high tech cellphones! Turns out Machida is home to a number of top shops, not the least of which is Koshinbô, known for uh, only having hot girls staffing the kitchen. Um, let's go there. But we weren't the only ones willing to queue up on a rainy Sunday, and the line was about 20 folks long when we rolled up. But it doesn't count unless you wait in line, right? Rock N Roll! 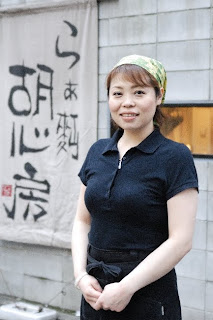 Koshinbô was opened in 2005 by a one Nozu Rie, who is a total babe in the way that only a lady ramen cook in her late 30s can be. I'm going to refrain from any crass slurping-related jokes. Nozu is the daughter of Nozu Emiko, who runs a ramen shop a few stations down the line, also named Koshinbô, though using different characters to write the name. There's probably something of a back story to this female ramen family, but the important thing is that pork soup runs in Rie's veins. 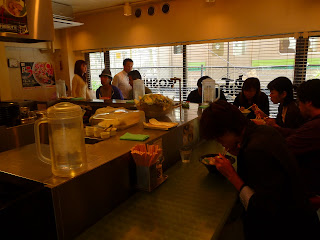 I figured the shop would be crammed with dudes clamoring to get a glimpse of the rare sight of girls cooking ramen, but the clientele was overwhelmingly female. Having a female staff behind the counter makes the place feel friendly to girls who might be intimidated by the atmosphere of a more conventional shop, and the place is painted in soft pastel pink and turquoise. There's even a women-only deal of ramen, salad, and dessert for just under 10 bucks, drawing in the ladies who lunch set. 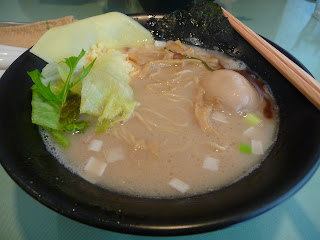 So what kind of ramen do these soup boiling dames do? Hella delicious ramen, but we'll get to that in a minute. The base broth at Koshinbô is a blended fish-tonkotsu (pork bone) soup, but it bears little resemblance to the ocean-flavored options at the likes of Inoshô or Jigen. Rather, Koshinbô's is a simple white soup not unlike those of classic Kyushu shops, but here the strong porky smell is tempered with a delicate fish-holding hand for a smooth, mild broth. Floating atop are a few pieces of shredded bamboo, threads of fresh seaweed, and a handful of fresh cut lettuce leaves that add a nice crunch as well as a light flavor. 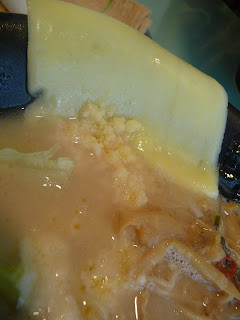 And then there's the cheese. A nice crumble of a stronger powdered cheese and a fat slice of soft processed cheese. My god, why don't more shops put cheese in their ramen? It makes the creamy broth even creamier and hugs right to the gooey noodles, working with the lettuce to make a kind of liquid noodle salad. No wonder the ladies love it. 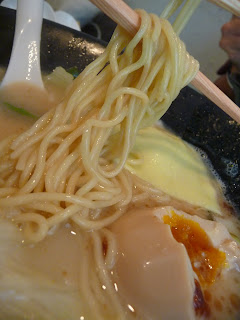 The egg was properly eggcellent, in fact one of the best I've had. The noodles are whitish, mostly straight, and fairly thin, not unlike what you might find in a bowl of Kumamoto-style ramen. There's also a little dab of tasty burnt garlic oil in the Kumamoto tradition. Koshinbô's is another absolutely top class bowl, and well worth the trip. As the cheese melted into the broth all thoughts of 69 Rock N Roll One slipped from my mind...for now - I'm looking at you, Keizo!
Posted by Nate at 10:50 PM

Check out the Cheese Ramen in Ebisu - tukumo.com is their site - has special cheese from Hokkaido, I believe, and they only sell 200 bowls per day.

From a fellow ramen-loving foreigner!

@kevin - yeah! tsukumo! that place is great! i went there once years ago, i should go back soon...


Howdy! I know this is kinda off topic but I was wondering which blog platform are you using for this site? I'm getting tired of Wordpress because I've had problems with hackers and I'm looking at alternatives for another platform. I would be great if you could point me in the direction of a good platform. capitalone com login