Since moving out to the Araiyakushimae (stands for "in front of the new well medicine teacher," folks) area, I've been taking the opportunity to check out some shops along the Seibu Shinjuku train line. The line runs right behind my house (in fact you can see it from my window), and if you follow it west a few stops you get to Nogata, home to a buddy of mine who plays drums in a punishing hardcore band. Nogata is also home to Hanamichi, which serves one punishingly spicy bowl of thick miso ramen. 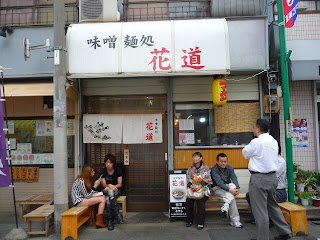 The head cook at Hanamichi, spent time cutting teeth (and noodles. and cutting cutting noodles with his teeth) at both Môko Tanmen Nakamoto and Inoshô, two of the spiciest shops around, so it's to be expected that when he comes with the chilis, he comes correct. 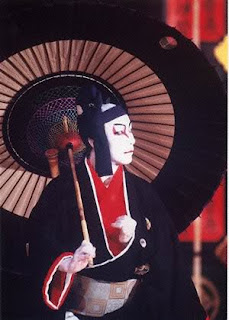 Hanamichi literally means "flower road," and it refers to the portion of the Kabuki stage that extends like a walkway out into the middle of the audience. The hanamichi is where the actor goes to strut his stuff, do his dance, strike his best pose and flaunt it. Say what you will about Kabuki, but it is not a subtle art, just as the ramen at Hanamichi pulls no punches with its strong flavor. 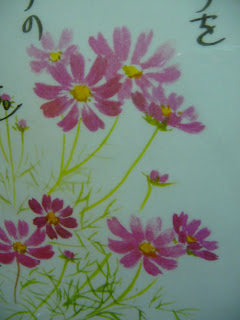 The shop staff exude a similar blend of masculinity and floridity, each with matching shaved heads and black and pink shirts bearing a blooming flower pattern. You'll wonder what they're doing back there for so long while they prepare your noodles, but you'll be served up with this fine bowl just as Ol' Dirty Bastard takes the mike from Method Man on the shop stereo. 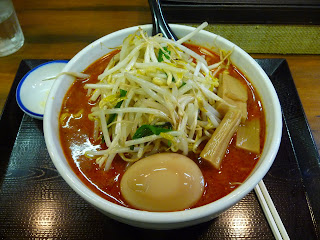 Yep, there's miso under that chili oil somewhere. This is the real stuff, the kind that makes your tongue tingle and your brow bead with sweat as you keep on slurping. There's cheap spice that masks all flavor, then there's nice well blended pepper like this, which stays sweet as it stings. The miso underneath is strong enough in its own right, and doesn't get overwhelmed by the capsaicin. 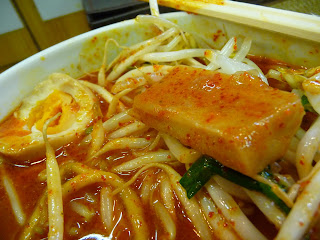 The bamboo shoots are veritable bricks, big blocks with lots of fresh woodsy crunch. I just got a regular helping of veggies, but a free upgrade is also available, in case you want to make your ramen look like the towers of terror served across town at Jirô. There's also an option for a free side of fresh cut garlic which makes the soup even more intense than it already was. 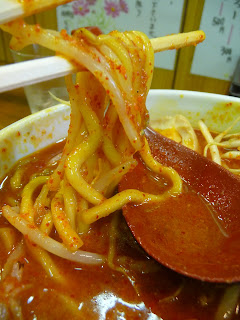 The thick gritty soup looks a lot like Inoshô, but it's not a fishy blend like that of the cook's old haunts. It's got a spice factor to beat the band laid atop a miso mix, but it's clearly a different animal than Nakamoto's superficially similar bowl. In other words, this flower master learned his lessons well, then gone on to create his own distinct style, rather than merely imitate those he studied under. He also takes pity on those of us who don't do châshû - when I ordered my ramen with no roast pork on top he plunked down a hundred yen discount. I thanked him and took the coin to the stand next door where it bought me bean jam pastry branded with a smiling frog face. Hanamichi's ramen might be too strong for some, but if you like a punch in the tongue, don't miss it.
Posted by Nate at 3:14 AM

Dear Nate,
This is the first time for me on your blog. I have a couple comments and a question. First, I am a real fan of both the Waseda area and it ramen, and Dandanmian (Tantanmen). I am currently living in Chengdu, where I get the real thing regularly. My favorite place for dandanmian in Tokyo in Tan'ou, which is on the road from Waseda to Takadanobaba. If you get their choukara tantanmen, it is very satisfying. It is not, however, too much like real dandanmian, which is always a dry mian, with no soup. I tried their dry tantanmen once and was not too satisfied. Not how enough and not enough huajiao (sanshou). I was a little puzzled by your references to Chinmaya, because I know that place as Chinmahan. There used to be only one shop in Jinbouchou, but now they have expanded enormously. I like their tantanmen, but I think their Mabohan (Mapo doufu) is better. It does have more huajiao than almost anyplace I have been in Japan. I am very glad that they are succeeding. When I was in Japan 3 years ago, I was worried that they might not survive.

My question is this: On the left side of the road to Takadanobaba, a bit before you get to Tan'ou, there is a great ramenya whose name I have forgetten. They are a chain with perhaps 2 or 3 other shops, one in Ebisu. Can you help me remember that shop? They have a special that includes a few gyouza that I was particularly fond of. It is an independent building, perhaps just before a sort of department store that always had a few bicycles for sale. Your input would be most appreciated.
Because I am in China, access to blogs (and even Facebook) is pretty sporadic, so I would appreciate it if you could copy any response directly to my email account at kleemant@colorado.edu.

Please let me know if you ever make it to Sichuan.