Some people say that there are basically two kinds of ramen freaks - "repeaters" and "collectors." That is to say, those who find a couple shops they really like and go there regularly, and those who are always jaunting off to try something new and different, always searching for the next good bowl. It should be pretty clear at this point which of these camps I fall into. That said, sometimes circumstances call for, nay, demand, a repeat visit. 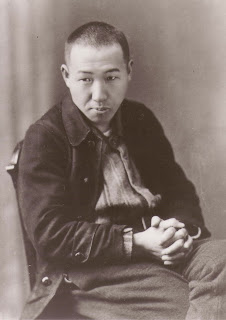 A couple weeks balk, I went to a talk on the Waseda University campus about the author Miyazawa Kenji, national identity, and liquor licensing. Long story. I was walking out to grab a whiskey before heading home when I bumped into my adviser Professor T, who had also attended the talk. He asked what I had eaten dinner yet, then asked if I knew any good ramen shops in the area. My mission was clear. 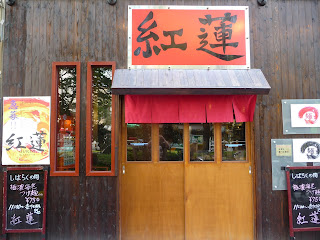 I suggested we hit up Guren, just a few steps from the main campus gate. Professor T noted the chic polished steel interior as we perched atop our stools, and for once I was the one giving him advice, recommending the shop's extra thick shrimp soup tsukemen (dipping noodles). I had gotten the shrimp last time, so this time I decided to try out the new menu item of abura soba - soupless "oily noodles." 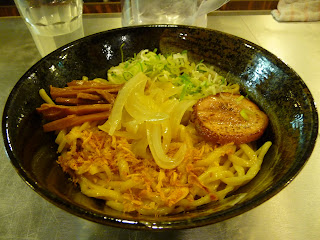 The abura soba at Guren is a bit more "up to date" than similar dishes around the corner at Menchintei or Niko Niko. Abura soba is a secret Tokyo tradition dating back decades, but these were in the new high end ramen model - the noodles that much thicker, the garlic chips that much crunchier, the pork medallion perfectly blowtorched brown. 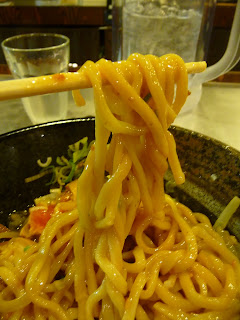 As we sat slurping, Professor T politely complimented my technique, but he was the impressive one. Unshakable as always, he left his (elegantly tasteful) suit jacket on, and kept his tie untucked. Needless to say, not a drop of soup got anywhere near either. Between bites I confessed that I had taken the study skills I learned in his seminar and applied them to my ramen research. Thankfully, this did not seem to disturb him. 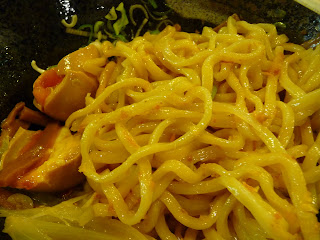 Guren's abura soba may lack the raw junk food quality of say, Bubka, but the bowl is eminently tasty and satisfying. The best part is the fat slices of white onion, sauteed to a soft yet still crunchy sweet yellow. Even the white of the egg is nearly liquid, held together by a thin outer shell. If I could make one complaint it would be that I wanted to see the standard abura soba accompaniments of chili oil and vinegar squirt bottles - the straightforward soy-based oil at the bottom of the bowl did the job, but a few squirts of acid and spice never hurt anyone. 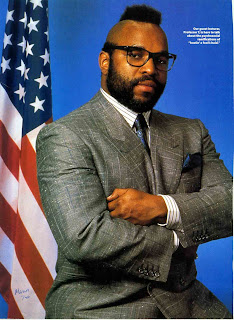 More importantly, Professor T seemed satisfied. I pity the fool who does not give Professor T what he wants, and I would hate to think that I might be that fool. My adviser is an eminent scholar who has taught at Japan's top universities, delivered national radio lectures, collated hefty literature compendiums, published dozens of articles, and hobnobbed with top authors and editors. And I have eaten ramen with him.
Posted by Nate at 2:37 AM

The construction of hydronic controls will be very easy if we take proper care on power supply, load, switch, combination controls, panels etc. If these things are utilized properly hydronic controls can be made at moderate budgets with high efficiency.Costumes Rock women’s Halloween costumes

I am so pleased I found this blog, I really got you by an accident, while I was searching for something else. The story and blog you have published is very interesting as well as informatics, Thanks for sharing such type of informatics thing.Through Hole

pretty valuable material, overall I imagine this is really worth a bookmark, thanks real estate chilliwack

Really great post. I just discovered your web journal and needed to say that I have truly delighted in perusing your blog entries. Any way I"ll be subscribing to your food and I trust you post again soon. Huge much obliged for the helpful information. 70s fashion

Thank you for some other informative website. The place else may just I get that kind of information written in such a perfect method? I have a venture that I am simply now running on, and I’ve been at the glance out for such info.Tenerife

Thank you for you kind comments about my blog,....I am glad you all are enjoying this format. GO to site picbear to know more information of instagram.