After my recent trip back to the US I was chomping (slurping?) at the bit to get a bowl of ramen. I had gorged myself on hella mexican food and homecooked meals, but now I was back in Tokyo and I felt the jones. I couldn't even remember the last time I had gone a whole three weeks without a bowl of noodles, so I had to make my first bowl back count. 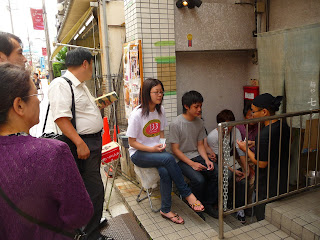 After a quick glance at my hitlist, I decided to pay a visit to Menya Shichisai, located in the quietly bustling neighborhood of Toritsu Kasei, on the Seibu Shinjuku train line. Shichisai (Seven Colors) caught my eye when it won accolades from all the top celebrity ramen cooks on last years' New Years Eve ramen TV special, and I wasn't the only one for whom Shichsai's reputation preceded it - the line was about 12 deep when I rolled up. It moved slowly, but you'd be hard pressed to find a friendlier shop, with one staffer talking every customer through each of the menu options. 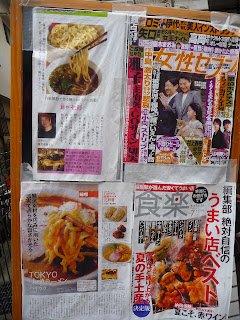 Of all the shops I've visited, Shichisai might be the one whose clientele differs the most from the stereotypical image of the sweatily slurping male. Nearly the whole line was made up of families on Sunday outings - there were a few young couples with kids in tow and a few sibling pairs queuing up with their parents. The accolades posted out front came not from the usual ramen glossies, but from the likes of "Ladies Seven," the kind of conservative middlebrow magazine that, uh, puts the imperial family on the cover. 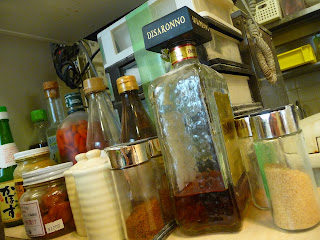 So what's the haps? How does Shichisai reel in the housewife set? Three little words: or-gan-ic. Shichisai takes great care with their ingredients and preparation, advertising no flavor additives whatsoever. As they put it - "We hate MSG. Added flavors ruin the natural taste of the produce that farmers have worked so hard to grow." The inside of the shop also displays articles and postings regarding the negative effects that chemical food can have on one's health, and I got the sense that the place takes their organic philosophy seriously. Having just returned from America, land of xantham gum, potassium benzoate, and high fructose corn syrup, it didn't take much to get this ramen writer on board. The counter, cluttered yet in clean in the manner of a country house, held a number of unusual bottles including wasabi-tinted olive oil and amaretto liqueur, which I assume go into the soup, because they would not make a delicious beverage. 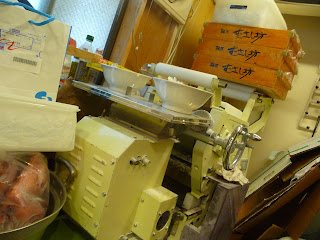 But it doesn't stop there. Shichisai's cooks traversed the region to find their three favorite gleanings of wheat, which are then stone ground in-house every morning for the freshest possible noodles. On TV, the Shichisai guys described themselves as "noodle theorists," and I was about to find out exactly what that meant. 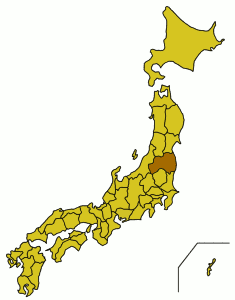 Shichisai serves both shôyu (soy sauce) and shio (salt) broths, but their real specialty is their Kitakata-style ramen, which they only make 20 bowls of a day. Good thing I showed up early! Kitakata is a town a few hours north of Tokyo in Fukushima Prefecture, and Kitakata ramen is characterized by a complex broth made of pork, chicken, fish, and vegetables, featuring wide, flat, curly noodles made chewy by unusually high water content in the flour. Although less widely known, Kitakata is often considered the city in which ramen plays the most important role in everyday life - I've even heard that Kitakata has more ramen shops per capita than anywhere else in the country. Many of the famous shops open for breakfast, and apparently the unadorned word "soba" here refers to the Chinese variety (that is to say, ramen) rather than the Japanese buckwheat noodle. 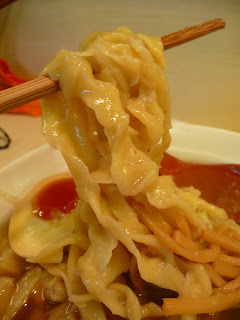 Well, I ain't been to Kitakata, so I can't tell you how faithful Shichisai's bowl is, but I can tell you that it is falling down deeeelicious. The broth stays nice and light, but it packs a punch that delivers shôyu satisfaction without having to rely on a strong salty taste. I can't say I tasted the amaretto or the olive oil, but there is a lot of love and care going into this brown bowl, and it goes down smooth. The gooey orange yolk drips out of one of the freshest eggs I've ever tasted, and the thin cut bamboo shoots burst with woodsy, crunch flavor. If there wasn't enough going on in your mouth you can grind some fresh white pepper on top as well. 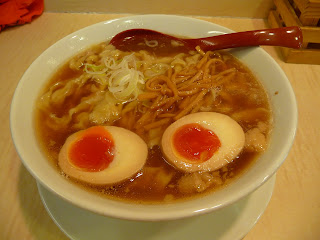 But what really makes Shichisai unmatchable is its noodles, which are unlike any other I've ever eaten. Well over a centimeter wide, each noodle is totally unique, hand kneaded and hand cut into curly, chewy ribbons that you won't be able to get enough of. I can't even express how crazy these noodles are. They almost reminded me of some of the noodles I ate in Northwestern China, and you can really get a sense of the quality of the wheat, a flowery flour moist all the way through. I wish every shop had noodles this "theoretical!" 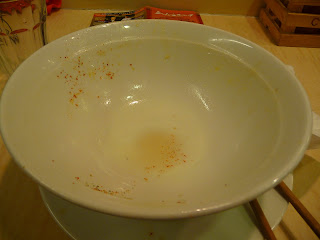 I can't even remember the last time I finished a bowl so completely, so down to the last drop. It was all I could do to keep from licking my plate clean. Dudes, if what you've already read hasn't convinced you, I don't know what will - this place is fan-fricking-tastic.

TAGS: shoyu, kitakata, highly recommended
Posted by Nate at 1:38 AM

Those look really similar to the mee poh/mee pok noodles you get in Singapore. Those really whip the llama's ass!

Dude you have to go to Kitakata someday. It literally is like a serious ramen town. Out of all the cities I went to, I think they did have the most ramen-ya's for its size. I almost didn't want to leave!

@J - i cant even begin to imagine the deliciousness of noodle options in singapore. i have no doubt that they rock over london and rock on chicago.