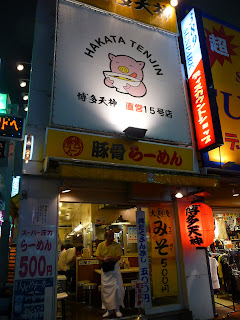 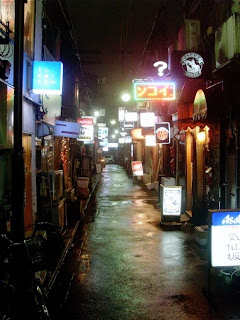 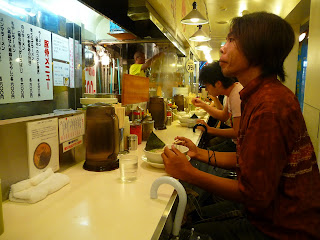 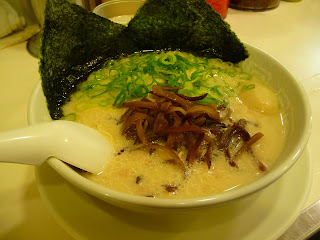 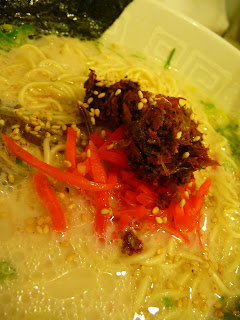 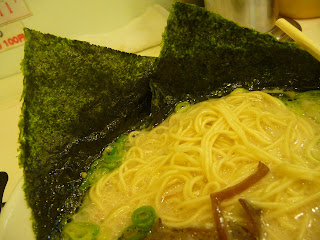 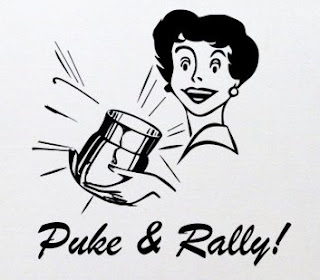 Let's just say that those noodles might have wished that my gullet was marked as a one-way street.
Posted by Nate at 9:57 PM 5 comments:

On another sweltering late summer day, Brian and I met up to bump down a bowl. He had just gotten back from a month in Hokkaido, where he had passed the time cruising around on his motorcycle, shoveling cow poop, and oh yeah, eating ramen. Hokkaido is undoubtedly one of the nation's main ramen destinations, with the famous Sapporo-style miso, Asahikawa-style seafood soy sauce, Hakodate shio (salt) broth, and Muroran-style curry ramen, which is apparently poised to be The Next Big Thing. But one thing they don't have in the northern island is good, thin, old-fashioned Tokyo style shôyû (soy sauce) ramen. 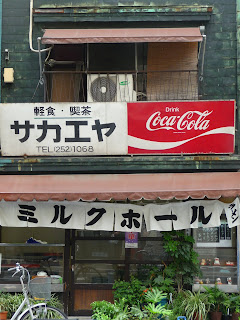 We met up near Tokyo station and walked north along the river to the Kanda area, which, despite it's proximity to downtown, still retains a good deal of the scruffy feel of early postwar "low city" Tokyo. Our destination was Milk Hall Sakae-ya. I recently downed a bowl of curry-milk-miso ramen, but you're not going to find any milk in the broth at Sakae-ya. Rather, "Milk Hall" seems to have been a common moniker for cafes serving "Western-style" meals in the mid 20th century. Sakae-ya opened its doors in 1945, serving coffee and pastries, as still noted on the vintage sign advertising light meals (and of course that nearly unmatched symbol of postwar Americanization, Coca-Cola). 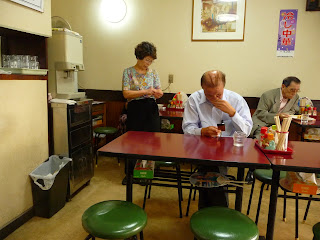 If the genesis of the shop resembles that of the Waseda staple Merci, so does the vibe, allowing for about 50 years of age difference between the university clientele and the old folks that frequent Sakae-ya. It's as much neighborhood hangout as it is ramen shop, and the 70-plus crowd was joking away happily between slurps. The staff at Sakae-ya may not have the spectacular dye jobs of the little old ladies at Haruki-ya in Ogikubo, but the old women running the front doted on Brian and I, making friendly small talk while we waited for our bowls to come up. 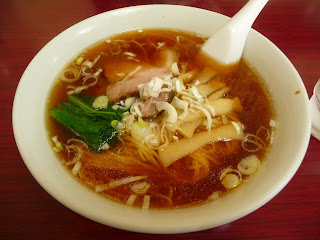 Sakae-ya's is the kind of bowl you can envision almost perfectly before you see it - at Tokyo shops this old, there's no doubt in what constitutes a bowl of ramen. A fat grip of thin noodles sitting in a light brown soy sauce-based chicken stock soup topped with a few slivers of menma (bamboo shoots) and a dash of chopped scallions. But even in this seemingly simple bowl, you can catch hints of the divide between Tokyo's east side and west side - western rep Ogikubo ramen is topped with small triangle of nori seaweed, but east end bowls like Sakae-ya's usually replace the nori with a clump of stewed spinach. For decades, before Hakata tonkotsu hit the big time, before Sapporo miso had come to the capital, before the idea of high-end "ramen dining" was swimming around in its father's balls, "ramen" in Tokyo was this and little else. 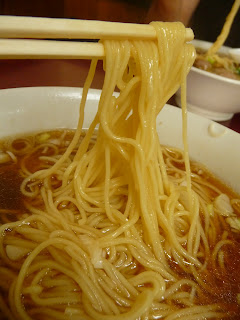 And of course, it tasted delicious. A bit sweeter and a bit less fishy than the crosstown Ogikubo bowls, Sakae-ya's ramen is light enough to be refreshing on a summer day. I may not have grown up in postwar Tokyo, but this ramen had something of a nostalgic taste that stirred deep memories. It was Maruchan. Or rather, Maruchan was it. The instant "Top Ramen" I had eaten for so many after school snacks was clearly drawing from soup like Sakae-ya's. Needless to say, the flavors go a little deeper when made by a hand more skilled than my own, age 9. 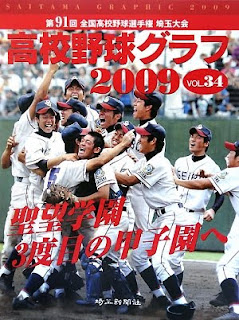 It was high school baseball season, an annual summer ritual that grabs the country's attention and makes March Madness betting pools seem like pee-wee league stuff. My boys from Chiben Wakayama had been eliminated from the tournament a few days before, but the finals were on as we ate, and after finishing we settled in for another 20 minutes to join the regulars in rapt attention as the high school kids slugged it out. There's nothing quite like summer in Tokyo.
Posted by Nate at 9:44 PM 1 comment: 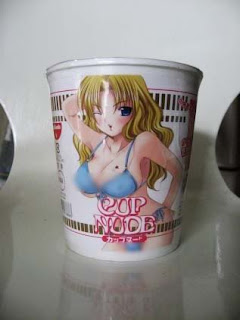 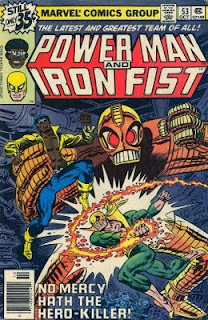 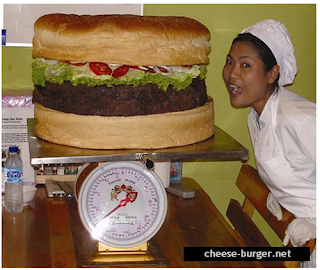 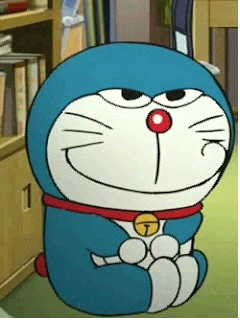