Back in ‘Baba to run some errands, I decided to bang out a bowl. Tucked away in a small alley a fair piece west of Takadanobaba station is Menyû Issei, a cozy little place that was next on my hit list. 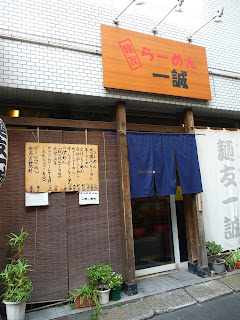 Head west on the north side of the street until shops start petering out, then keep your eyes peeled for a sign leading you onto a side street. Look for the blue curtain and brown sign and take a seat inside “Issei, Friend of Noodles.” 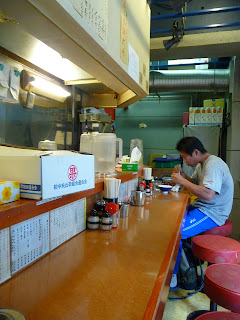 But there is something that sets Menyû Issei apart, though it might not be immediately apparent. The staff hails from the Amami Islands, the northernmost archipelago of Okinawa, and they take pride in using products from their home turf. Okinawans have managed to pull off the unlikely feat of simultaneously eating massive amounts of pork and claiming the crown of longest-living people on earth. Issei proudly uses Amami-raised pigs; at night they also serve Amami style pickled papaya, bitter gourd (gôya) , and the ever-popular island staple of Spam. I don’t think there’s such a thing as “Amami ramen” as such, though. 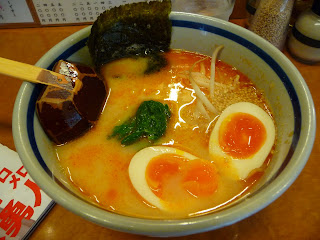 On first glance, Issei’s soup, a tonkotsu shôyû (soy sauce and pork marrow) broth, looks pretty similar to standard Yokohama-style ie-kei ramen, right down to the stewed spinach topping and extra sesame. But Issei’s soup is a bit sweeter, a bit less salty, and for an extra 50 yen, they’ll toss in a layer of (pretty mild) chili oil. 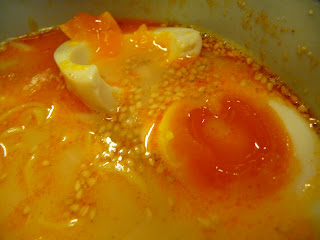 Just look at how the gooey orange egg yolk blends into the yellow soup and ochre chili oil. I guess the Amaminians (Amamanians? Amamaniacs?) are also masters of camoflauge. 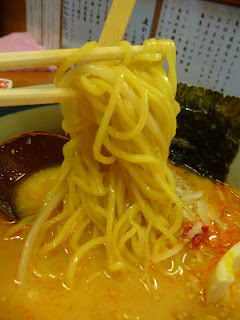 The noodles are also straighter and a bit thinner than those found with ie-kei ramen, which is fine by me, because the neighborhood already has plenty of orthodox ie-kei joints. Overall, Issei’s ramen is a simple but solid tonkotsu shôyû that is far less oily than most similar bowls, which is nice in the summer heat. 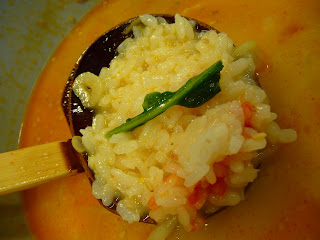 Just in case you’re still hungry, take advantage of Issei’s lunch special of a free bowl of rice, dump it in the soup, and you’re set for the afternoon. Give these hardworking islanders in exile some noodle love!
Posted by Nate at 7:42 PM

you have to check out TENGU Ramen in Kita Koshigaya!!

Egg looks so perfect and rich, almost like duck egg! Not sure if Ryan told you, but I'll be in Tokyo mid-September. If you're around and free, I'd love to try out your absolute favorite / the best / most mindblowing ramen place!

@brell - thanks for the tip! i've never been to kita koshigaya before, but when i do go, i know where i'm eating...

@bittermelon - yeah! i love it when it's so orange and gooey like that. ima post a steez on your blog re: the rest of that sentence.