For many people who aren't regular noodlers, ramen shops have a certain kind of...image problem, or at least did until recently. Sweaty, cramped, and packed with male regulars speaking what sounds like a secret language with the cook, it could be a bit off-putting for those who weren't used to it. Hence the recent popularity of calm, well-lit, and fashionable shops actively catering to female customers who heretofore would not have deigned to set foot into such a den of men. But there are still some old fashioned battered around the edges shops that give even the regular ramener pause. And that's OK. 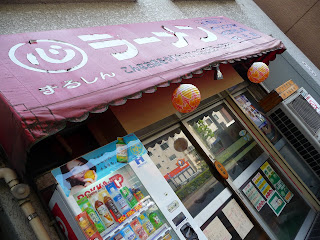 Marushin, located just around the corner from Menchintei is one such shop. I don't know how long it's been there, but it’s been long enough that the letters are peeling off the sign. I had cruised by once or twice, but didn’t really feel up to poking my sweaty white head through the door – it somehow gave off the vibe of an old men’s member’s club, of which there are plenty of in Tokyo. But this time I clatteredopen the door and took a few steps back in time. 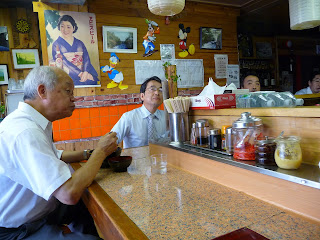 The walls were clattered with early-postwar era decor like aluminum Disney character cut-outs, old photos, and assorted beer maid posters, and most of the clientele seemed of the age range that would remember when a shop like this would have felt new and hip. I believe the Japanese turn of phrase would be taimu sulippu. It turned out my intuition hadn't been entirely wrong; besides a large menu of ramen staples and basic meat-based meals, Marushin also holds liquor bottles on keep for their patrons. Nonetheless, the vibe was friendly enough, even if it did take the single old cook a while to putter out to take my order. 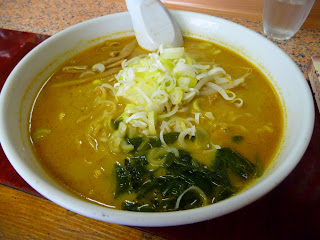 Pretty much all the standard permutations were available, and then some – shio (salt), shoyu (soy sauce), tanmen (a different kind of salt...sensing a trend here?), tantanmen (“spicy Chinese style”), and so on, each of which can be loaded up with corn, bamboo shoots, seaweed, kimchi, or any other pickled thing you could think of. I was going to go with the simple shoyu when a special item written on paper on the wall caught my eye – “Miso Curry Milk Ramen.” Whuuuuuuu. Gotta go with that one, homey. Miso curry milk ramen is apparently also a secret special dish of Aomori city in the deep north, but I think Marushin's menu was more of the “we'll toss anything we have in the fridge in your bowl” variety. 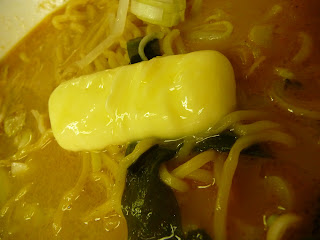 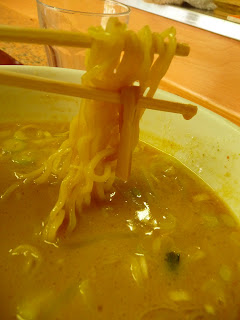 The noodles were straightforward, medium thick, medium yellow, medium chewy; pretty much your standard stereotypical image of a ramen noodle. Fine but forgettable. 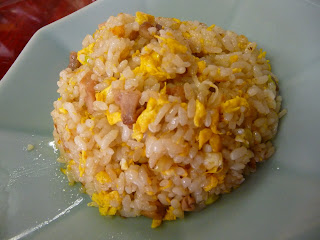 Plus, for about 150 yen extra, they'll wok you up that other old-school ramen shop standard, the hanchan (half-sized plate of fried rice). For every fresh funky fusion shop, Tokyo has at least two hole-in-the wall eateries of the kind that are sadly disappearing from the US. Waseda is in the northern part of the city, which makes sense because when I was eating at Marushin, I felt like I had gone way, way uptown.
Posted by Nate at 10:36 PM