My buddy D was crashing with me for a few days, and we ventured over to grab my first bowl back in Baba since moving away. Just as we were debating which shop to hit up, I spied a guy on the street holding a small white sign and intoning that salacious R-word. Wait a minute, there isn't a ramen shop in this alley! Unless... there is? I asked homeboy what the deal was, and he told me that a new shop had just opened up last week in the alley near Kômen just west of the station. Righteous, brother! 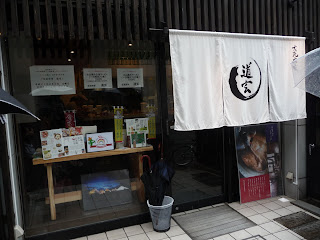 The shop's name is Dôgen, and no, it doesn't have anything to do with Dôgenzaka, the sex hotel district in Shibuya. The clue is in the calligraphy - see that little ink brush circle? It's some Zen thing: the sound of one hand clapping? The smell of a wet dog's fur? Perchance the unsated hunger in a graduate student's belly? 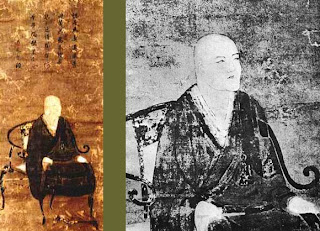 The shop master is apparently a big fan of the 13th century Zen monk Dôgen, and, as his acolyte (as it were) pointed out, he is appropriately bald in homage. Would the would-be Zen master's ramen be up to snuff? Do snails have assholes? Does the pope shit in the woods? Can I stop rattling off scatological fake koans? 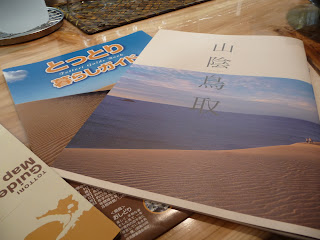 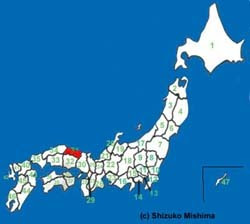 The shop is so new that it doesn't have a proper menu yet, but it does have a whole table full of tourist brochures about the obscure western Japanese prefectures of Shimane and Tottori, which as far as I know, are by no means parts of the country famous for ramen. 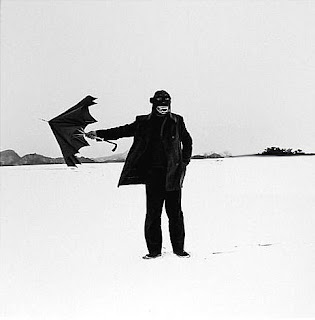 Tottori is however, famous for sand dunes. Tottori is home to some of the only dunes in the country, which I guess also constitute the prefecture's primary tourist destination. You may remember their starring role in the classic Abe Kôbô / Teshigahara Hiroshi new wave film "Woman in the Dunes." One of Tottori's other claims to fame is as hometown of the photographer Ueda Shôji; as luck would have it, my buddy D is quite the photography buff, and was actually on his way to Tottori the very next day. Fortuitous! 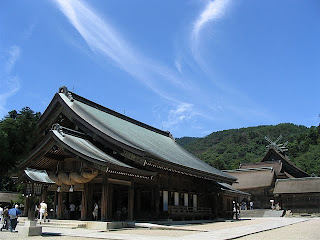 Shimane, for its part, used to be home to the powerful Izumo clan, but they got the crap kicked out of them about 1300 years ago by the Yamato clan, and it's been a backwater ever since. Though it's still home to the second (underline) most important shrine in the country, Izumo Taisha, like Tottori, it is in no way famous for ramen. 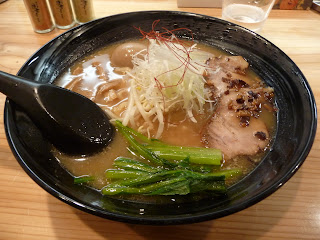 So what gives? I dunno if our buddy the monk-cook is from Tottori or Shimane or what, but the shop concept is "ramen made with products from Tottori and Shimane." Uhh, right on. At first glance, the bowl (which is available in either thin 'assari' or strong 'kotteri' styles), is almost indistinguishable from Yokohama ie-kei (LINK) style ramen - thin tonkotsu shôyû (pork and soy) broth, leafy greens, thick and chewy curly yellow noodles. But there's more going on, especially with the smattering of chopped burnt white onions. Funny, I don't remember ordering my ramen "animal style!" 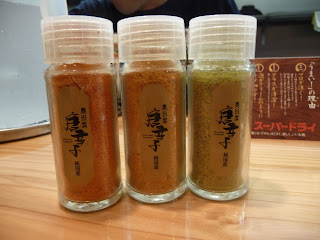 But Dôgen rises above with those little jars of pepper on the table. Featuring green, orange, red, black, and habanero peppers locally grown in Shimane, you can dash a bit on with each bite, and each creates a whole new flavor, from sweet to smoky to spicy. For what it's worth, some of the best ground pepper I've ever had. 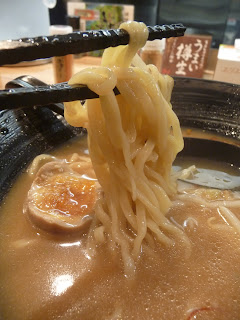 The overall quality of the soup and noodles are also excellent, and we both ended the meal smacking our lips and agreeing that we'd come back. Apparently the menu will be expanded with special Shimane soy sauce soup, and there's also a limited time beef ramen, which was already sold out for the day when we visited. 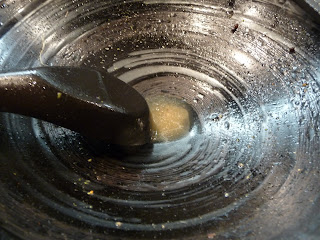 So look into your bowl, seek nirvana, and go seek out Dôgen on its back alley. Another innovative and solid addition to the hood, it needs your business!
Posted by Nate at 1:28 AM

On your recommendation we tried Dogen this evening and it was tasty. The small menu card had 4 items on it - Shio, Beef, Soy and Special Tsukemen. Beef and and Soy were out so we tried the Shio.

The light consomme-like broth had just the right amount of oiliness and the pepper assortment was as advertised.

Thank you for the recommendations and sharing your finds. You've made exploring Waseda and the 'Baba a little easier for this ramen fiend.

Random sidenote: This was the first time I've seen a woman cooking and an all-female wait staff in a ramen joint.

hey kimberly, glad you liked it! I'm glad at least one person is reading the blog then actually getting out and trying the shops instead of just drooling over the pictures. It looks like Dogen has pulled it together with a proper menu by now, which is good news. Interesting about the female staff, it was all men behind the counter when I went in. Stay tuned, because one of the updates I'm planning is a Tokyo ramen map!