I was heading out to my buddy C’s monthly BBQ, but hunger struck before the flames hit the grill, so I decided to grab a quick bowl on my way out the door. Nagahama Shokudo is officially the closest Hakata ramen shop to my house, so I figured I better give it a shot sooner or later. 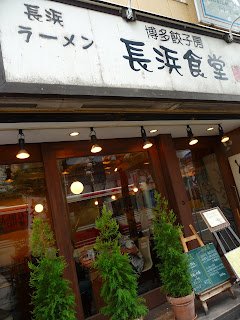 I didn’t realize it until I sat down, but Nagahama Shokudo (“Nagahama Cafeteria”) is the upscale family restaurant version of Nagahama-ya, the big chain Hakata ramen purveyor that served up some of the worst northern-Kyushu style tonkotsu (pork marrow) ramen I’ve eaten to date. My excitement faded when I recognized the font, but hey, I’ve got to at least try the place in my own hood. 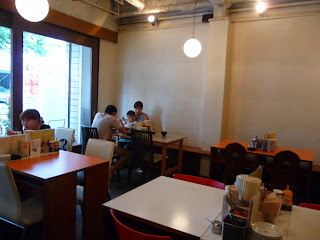 Nagahama Shokudo has a counter, but the majority of the big, open, well-lit space is filled with tables, which were filled with couples and young families eating lunch. Hakata-style pork bone ramen is by no means a taste loved by all, so Nagahama Shokudo offers more basic shoyu (soy sauce) and miso bowls as well as curry rice, Chinese-style tofu, chicken meals, and a full menu of gyoza (pot sticker dumplings). While gyoza are another Hakata pride item and you see curry rice at ramen shops from time to time, no true Nagahama-style ramen joint would offer miso ramen. Nagahama ramen (named after a neighborhood in Fukuoka) should smell like hell and be wolfed down at a dirty counter! 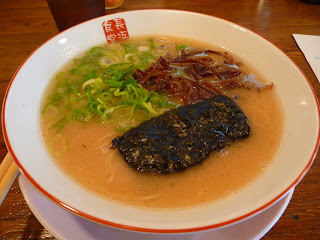 When my bowl came over the counter, it looked in proper order, a muddy whitish yellow-brown; at least there was none of the weird film that covered the bowl when I ate at Nagahama-ya a few months back. Though not deep and transcendentally pungent and stinky, the soup was still rich and tasty, though I think they may put in a bit of chicken stock, rather than 100% pork bone. The kikurage (woodear mushroom slices) were also nice and crunchy, and some of the best I’ve had. 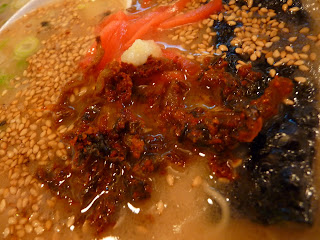 Then there’s the ‘turn this mother out’ part of the proceedings, wherein one dumps on copious amounts of sesame seeds, garlic, pickled ginger, and spicy takana mustard greens. The takana were hotter than usual, which was nice, and the bowl took on it’s crazy savory complexity. 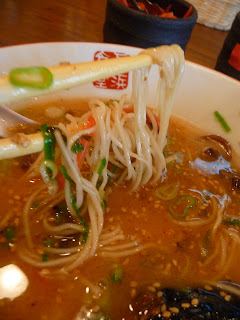 But nonetheless, it just didn’t quite reach the higher echelons of Hakata-style glory. Maybe it was the noodles – they were firm, but somehow tasted a bit off. I also felt a bit of resentment at not being able to choose from a variety of 5 different al dentitudes ranging from soft to wiry to raw. 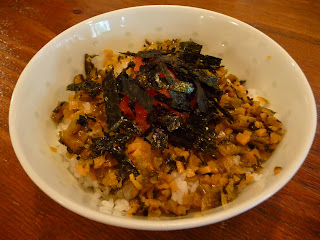 I also picked up a bowl of mentaiko (spicy cod roe) and takana (pickled mustard greens ) rice - pretty tasty and salty, but I like my mentaiko sweet and spicy, rather than on the bitter side, which this was; I think the bitter taste actually means it's fresher and less processed, but hey, I like my pickled cod roe the way I like my pickled cod roe.I’m guessing that Nagahama-ya / Nagahama Shokudo are franchise shops, and this branch is definitely superior to the one in Okubo, but I couldn’t shake that chain store taste. Serviceable but not splendid, I’d seek out Barikote in Koenji instead...
Posted by Nate at 10:17 PM

This was my favorite review on your site (so far). I think it was the use of 'al dentitude'. Thanks for all the Baba pointers. I'm thinking I'll get into it seriously.