Brian from Ramen Adventures once said a wise thing - "y'know I like tsukemen (dipping noodles) alright, but it sort of always tastes the same..." There's much truth in that statement - the vast majority of tsukemen shops offer a similar menu of extra fat warm noodles served with a sweet, salty, vinegary soy and fish-based dipping broth. The style traces it's origins back to the now nationally famous "Ramen God" Yamagishi Kazuo, original head cook at the Higashi Ikebukuro Taishoken. 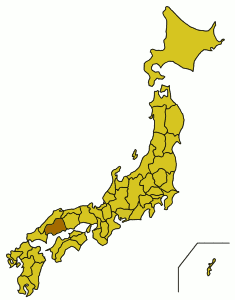 But who knew there was a different, totally distinct tsukemen tradition originating in Hiroshima? Not me, until a couple weeks ago. Apparently Hiroshima tsukemen traces its origins back to the early postwar, and was developed from culinary traditions brought back from wartime China. The dish didn't become "Hiroshima tsukemen" as such, however, until the mid 1980s, when it gained national attention on television. It seems like the number of shops serving Hiroshima tsukemen has been on the rise of late, buoyed by the general nationwide tsukemen trend of the last few years.

Perhaps the best known purveyor of Hiroshima tsukemen is "Bakudan-ya" (House of Explosions), a nationwide franchise of about 50 shops. I am guessing that the shop's name is a reference to the fact that you can order your tsukemen extra spicy, but did they really think it was a good idea to put together the words "Hiroshima" and "explosion" as a marketing ploy? I visited the branch on Otakibashi-dori near the West Gate of Shinjuku station, in a nice little pocket of ramen shops that also includes a Jiro, a Nakamoto, Curry Ramen Cocoichi, and 10 or so other tasty looking shops. 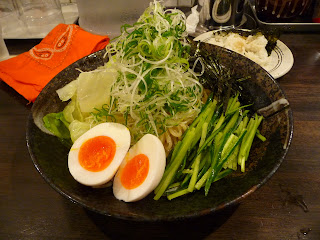 So, just what IS Hiroshima tsukemen? Unlike in mainstream Tokyo tsukemen the noodles are served not room temperature or warm, but cold, and are topped with a veritable mountain of freshly cut veggies, primarily cabbage, green scallions, sliced cucumbers, and crunchy seaweed. It's almost more like a light summer salad than a bowl of ramen. 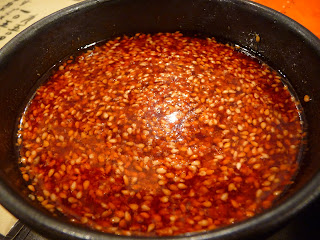 The kicker (emphasis on the "kick") is in the dipping broth, which is necessarily extra spicy and packed with red pepper and chili oil, as well as a healthy layer of fresh sesame seeds. At Bakudan-ya you can order the spice factor to your taste - the scale shows 1 - 20 , but after that you can "consult with the staff" or just add more of the tableside chili oil yourself. I shot through the middle and went with a ten. 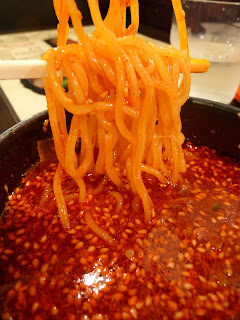 The soup is tasty, but even at spice factor 10, only provides a mild kick. Spicy for sure, but nothing near Nakamoto, Takagi-ya or god forbid, Yagura-tei. The broth is a bit salty, but a refreshing change from the Taishoken clones. Not unlike at THE The The, there is a bit of a Korean tinge to the flavor. The veggies are crunchy and popping with fresh flavor, and the cold temperature, sesame, and chili make for a perfect refreshing summer dinner option. Personally, I'd prefer thicker noodles, but hey then it wouldn't be Hiroshima tsukemen. 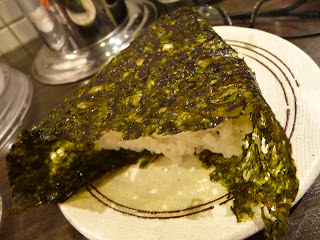 Although the noodle portion is a bit small for the money (800 yen), for an extra 100 yen you can get a boiled egg and an "Explosion Rice Ball" of warm rice tossed in sesame oil and wrapped in sweet salty and crispy Korean nori seaweed. Definitely worth the upgrade.

The shop itself is pretty standard, if a bit spacious, with memorabilia from the Hiroshima Carp baseball team dotting the walls. There are also some fun customer drawings, and of course the requisite wall of photos of TV personalities making funny faces when they order the spiciest thing on the menu. 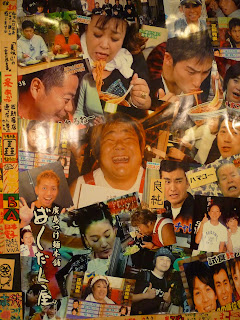 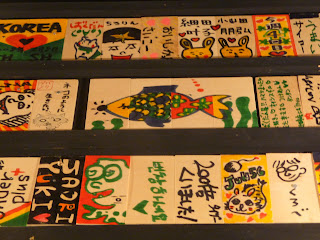 All in all, a nice change of pace and a good option for a hot summer night. I'm guessing there are more indie-style purveyors than Bakudan-ya out there, but if you want tsukemen but are sick of the same old same old, try tracking down some Hiroshima style noodles.
Posted by Nate at 8:43 PM

Nice, I went there sometime during my (still ongoing) lack of internet. The rice balls were really good. And a strange note, there was no "mixing soup" to add to the dipping sauce after eating the noodles, which was a shame-