Due to a set of fortunate circumstances, I spent the weekend here: 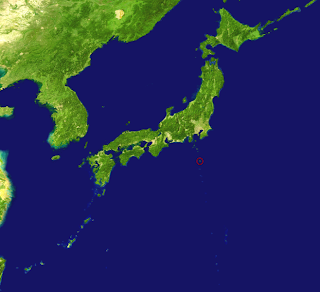 Hanging out with this guy: 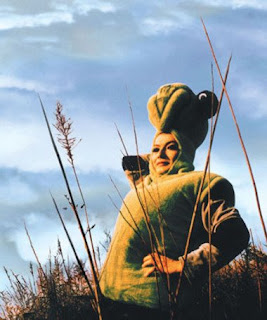 I had flown with my buddy C who runs the J-Rawk site to the remote Pacific island of Hachijôjima, 100 miles offshore from Tokyo, to interview Hoppy Kamiyama, musician, producer, composer, goofball, songwriter, and nice guy extraordinaire. I ate plenty of good food while on the green jewel of an island with a population of 8,500, but I didn't happen to spy any ramen shops. I did however, find some bioluminescent mushrooms: 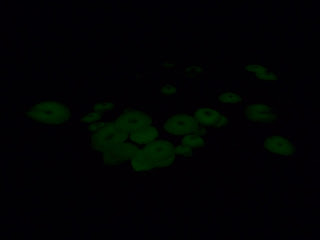 In any case, you best believe you know what I was hankering for on the way home from the airport. Walking east on Waseda-dôri from 'Baba station, I ducked into one of the alleys north of the road to grab a quick bowl at Shina Ramen Gotsubo. 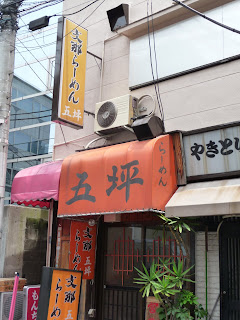 The sign outside said "open", but when I slid open the door, the lights were off and it looked like no one was home. I was just about to close the door and leave, but then I heard an old women call out from the back of the shop to come in and sit down. Naturally, I was happy to do just as I was bidden. 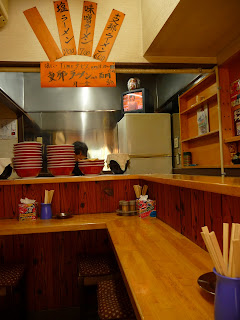 "Gotsubo" means "five tsubo" - an old fashioned style of area measurement. A few months back, I went to Hitotsubo Ramen in Shinjuku, which, at just one tsubo, was the smallest shop I've ever eaten at. Theoretically I guess Gotsubo is five times as large, but it's still on the small side. A narrow little wedge of a shop with an L-shaped counter, Gotsubo is definitely cozy. A lot of the cozyness emanates from the proprietess, a gray haired woman of about 65 who is easily the most aggressively friendly and talkative ramen cook I've ever met. I wouldn't be surprised if there are plenty of regulars who come to the shop to hang out with her as much as to eat the noodles. 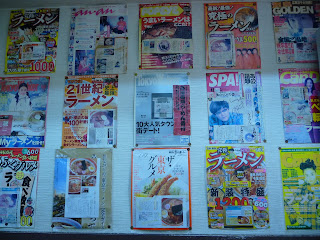 Though apparently plenty of customers (and journalists and critics) come for the noodles as well, based on the dozens of magazine articles and reviews posted on the wall. Shina Ramen Gotsubo's appeal lies in it's pure oldschoolness - you would be hard pressed to find many other shops around town serving a bowl of ramen as old fashioned and fitting with the image of "ramen" as Gotsubo's. The menu has three items (four if you count beer) - Shina ramen, miso ramen, and shio (salt) ramen. "Shina ramen" is a bit of a problematic denominator - "Shina" is an old word for China, so the meaning is essentially akin to "Chûka Soba" (Chinese noodles), an older term for simple shôyû (soy sauce) ramen. But the nuance of the word is quite different - "Shina" was a common term in the pre-war period, when Japan was in the process of brutally invading China, and it carries some pretty heavy associations with imperialism and discrimination. It would be a bit like referring to French food as "frog food", Italian wine as "wop wine", or the Palestinian people as the 'Philistine people.' 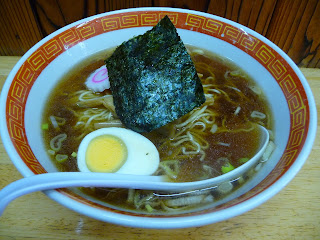 Maybe not the coolest game in town linguistically speaking, but Gotsubo's ramen is the kind that you might have been served back in the 1930s. The soup is a thin shôyû broth made with chicken, veggies, seaweed, fish stock, and nothing else. The cook warned me, "our soup is really thin, are you sure that's OK? I know you kids these days like that thick pork soup." Sure enough the soup is thin and "assari", but tasty and sippable. Generally speaking, it's old-fashioned properly "Tokyo-style" ramen, close in general style to Ogikubo ramen, but less oily and fishy. Merci might be another point of reference, though the soy sauce there is much thicker and stronger. The hardboiled egg, pink whirl of naruto fish cake, pile of bamboo shoots, and well-balanced sheet of nori seaweed make Gotsubo's ramen the picture perfect image of ramen that millions grew up with before regional ramen styles spread across the country, and decades before any "ramen booms" or trendy shops were twinkles in their father's balls. 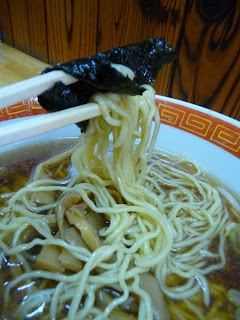 The noodles are thin, white, medium curly, and a bit on the soft side, which seems to be standard in traditional Tokyo shops. The bowl Gotsubo reminded me most of is the one I slurped at a pushcart outside Ikebukuro station, - to call Gotsubo "yatai" (street stall style) ramen would be an accurate description. The portion is a bit on the small side, but so is the price - only 500 yen on weekdays at lunch, and 600 yen other times. I drank the thin soup almost down to the dregs, then chatted a bit more with the proprietess and made my way out, but not before getting unsolicited recommendations for medical doctors in the neighborhood and being thanked for coming more times than I thought humanly possible.
Posted by Nate at 7:50 PM

This sounds like my type of bowl. Add a few bioluminescent shrooms and it would be perfect.

yeah dood, you would love this place. that is, if you could find time to get the noodles into your mouth between chatting with the old lady.

or maybe i only imagined i ate that bowl?!?! damn glowing mushrooms...