Following Merci and Inaho, Senkan Ramen Hozumi completes the trilogy of classic Waseda campus area ramen shops. All three members of this holy triumvirate have been loved by generations of students and all three are, in equally classic Waseda fashion, dirt ass cheap. Sitting on the strip of scruffy restaurants lining the main road to campus, Hozumi is just a couple doors down from Inaho. 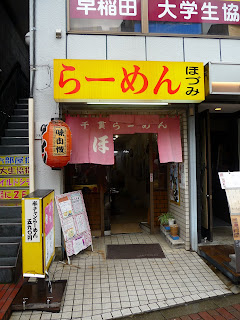 Hozumi is another shop I had been meaning to hit up for far too long. But the shop has been sitting there even longer, at least two decades, if not more, though it's history probably doesn't trace as far back as the tenure of celebrated law professor Tanaka Hozumi as university president in the 1930s. 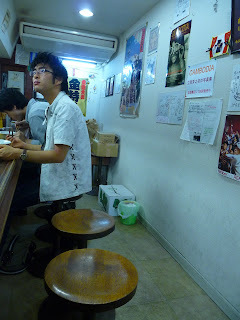 I ducked in to find just the kind of cramped, well-worn, and well-loved shop I had imagined. Fliers, posters, and assorted print detritus covered most wall space, and a bandana'ed man in his 50s shuttled quickly up and down the counter, dishing up bowls to a row of 10 hungry and bespectacled undergraduates. Unfortunately, I got stuck sitting next to the worst kind of my loud and obnoxious countrymen, and I could feel my blood pressure boiling like the soup simmering in the pot across the counter. 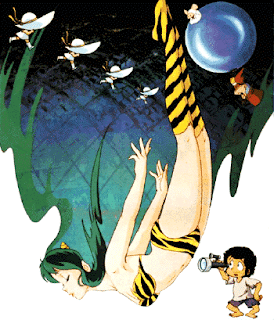 But it's hard to stay tense when Lum-chan is dancing across the room. The cook was wearing a ratty t-shirt featuring a huge image of everyone's favorite 1980s blue-haired, tiger-printed space princess. There seemed to be some kind of anime or manga connection at Hozumi, and a number of famous artists had contributed signed drawings to the wall, including Atashin'chi creator Kera Eiko. I'm surprised there aren't more shops with anime-world clientele, since the 'Baba area has long been a haven for manga artists, starting with the legendary Osamu Tezuka. 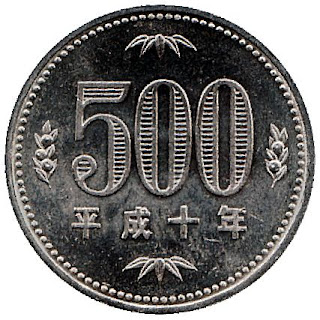 Almost everyone in the shop seemed to have ordered the lunch special of shôyû (soy sauce) ramen and pork rice, which clocks in somewhere just north of 500 yen. Unsurprisingly for a shop featuring a clapboard sign reading "420 yen...and thus delicious," Hozumi's ramen is almost shockingly cheap, with most options hovering between 400 and 500 yen. Shôyû, miso, and shio (salt) are all available, but I passed those up for something a bit more...exotic sounding. There's some kind of vague "Asian" connection at Hozumi - there's Korean spicy noodles on the menu, Cambodian photos on the wall, as well as more mysterious items like "Himalayan ramen" and "spicy Papuan tanmen." 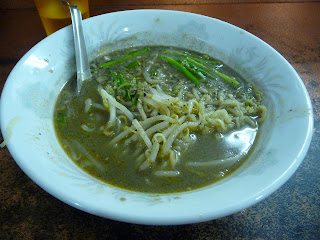 But the relevant part of Asia for my particular bowl was Thailand, represented in the generous helping of Thai bird's eye peppers ground into the soup of Hozumi's "black spicy miso ramen." A sign by the menu warns, "we humbly forbid those who like things 'a little bit spicy' to order this ramen." I also got a verbal warning when I ordered, but this Thai tiger's bite wasn't as strong as it's roar - it probably goes without saying that the spice factor couldn't hold a candle to the atomic flame of the black miso ramen at Yagura-tei, but Hozumi's ramen registered as more tingly then truly spicy. Nonetheless, bird's eyes are tasty and flavorful as well as just hot, and they gave the soup an interesting dimension. 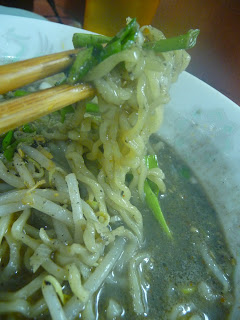 Unfortunately, the rest of the package fell a bit flat. I couldn't get much of a taste from the soup through the chilis, and it tasted more of a salty taste than any kind of miso I could discern. The noodles were also on the limp and soft side, and cut quite short, which limits the pure slurping sensation. A kind of weird quibble is the chopsticks - it seems that the same sets have been in use since the shop was opened, and the mouth-ends were rough and worn down, which felt a bit unpleasant in the mouth. Even with the requisite free bowl of rice and barley, the portion was small enough that I needed to pick up a rice ball after leaving, though I suppose that problem is remedied easily enough by shelling out an extra 70 cents for a larger serving. 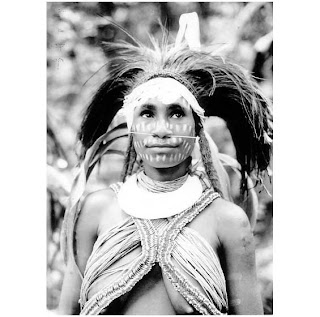 Nonetheless, the ground chilis and spices gave a pleasantly grainy texture to the soup, and the thin slivers of an unidentified Southeast Asian green were a nice change of pace as toppings. I can see how Hozumi is well loved by regulars who grew up eating the stuff, but I wanted to like it more than I did. Even, I'll still probably give it another chance or two, maybe try the standard shôyû, and of course, I've got to figure out just what the hell "spicy Papuan tanmen" is!
Posted by Nate at 7:31 AM