A few months back, I wrote a few entries describing trips through China's rural Muslim northwestern provinces of Xinjiang, Gansu, and Ningxia, on a series of epic journeys deep into the ancient homeland of the noodle as we know it. Well, Seihoku-tei's name means "Outpost of the Northwest", but it doesn't have much to do with any of that stuff. Rather, the name is a nod to Waseda's location in what were once the distant northwestern suburbs of Tokyo; Seihoku-tei has been on the block for something close to 40 years. Seihoku-tei is an old school Tokyo ramen shop all the way, with curtain shaking in the wind on a street corner just east of Waseda University's main gate. While lacking the (relative) fame and reknown of Merci, Inaho, or Hozumi a few blocks over, I'm sure plenty of young Wasedians make their way to Seihoku-tei for ramen re-ups and bottled beers. 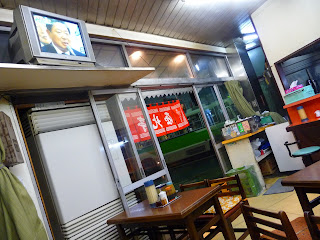 I ducked inside Seihoku-tei late one rainy night and plopped myself down at one of the well-loved tables inside the shop and craned my neck to catch a glimpse of Prime Minister Asô making an asshole of himself on television for hopefully one of the last times. 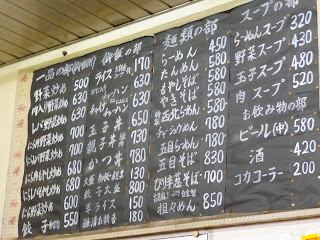 Sickened at the sight, I craned my neck in the other direction to take a gander at the menu and revive my appetite. Tacked to the wall for what looks like somewhere between a decade and decades, the menu at Seihoku-tei offers shôyû ramen with all manner of toppings, plates of pan fried Chinese style meats and veggies, and a healthy selection of donburi (rice bowl meals). An older woman with a back bent at angle that only older Japanese women who grew up malnourished can seem to pull off puttered over to take my order as her son the cook fired up the pots. 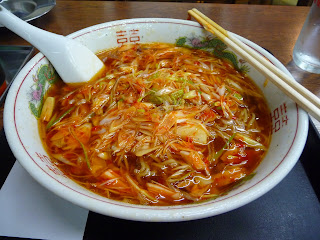 I ordered the 'pirikara negi soba' (spicy onion noodles), and a few minutes later got this piece of bowlful and bountiful beauty placed down in front of me. A huge pile of fresh scallions cut in all manner of size and thickness topped a bowl of thin brown soy sauce-flavored broth slowly turning red as the chili oil seeped into the soup. The soup itself has even more of a "Chinese food" taste than your average bowl of 'Chinese-style chûka soba', sweet and vinegary as much as salty. Seihoku-tei uses primarily (only?) chicken and vegetables for the broth, which make it a nice refreshing break from the thicker stronger pork and fish (tonkotsu gyôkai) broths taking over Tokyo. 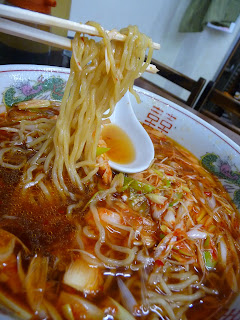 "Chinese-style" ramen shops often tend towards overly soft noodles, but Seihoku-tei's held up better than average; by no means firm, they at least kept some bite through the end of the bowl. The sheer volume of the sweet and spicy onions means you pull up some veggies with every grip of noodles and still have plenty left over. I ordered a small bowl of rice to eat with the onions, which was a perfect match. I don't see anyone traveling across town for Seihoku-tei's ramen, but it's the perfect bowl for a rainy summer night, and has a great old atmosphere that all too many ramen shops lack these days. Here's to forty more years on that lonely street corner!
Posted by Nate at 2:09 AM