About six weeks ago, I noticed construction going on inside the long-vacant storefront that once housed Kazusanbô. My emotions at moments like this are complex - on the one hand, I am always stoked for another ramen shop to open in 'Baba, but on the other hand, each new opening makes my task feel that much more Sisyphean. But hey, as long as the shop is a tasty one... 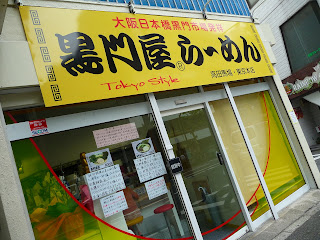 A few weeks later the sign came up - "Kuromonya - Tokyo Style, originating from the Kuromon market in Nipponbashi, Osaka"; Tokyo style, originating from Osaka? What does that even mean? Would this new kid on the block really have the right stuff to hang tough in the number one ramen challenge zone in the country?

The short answer is "hell yes!" But you don't get credit unless you show your work, right? So let me tell you a little bit about Kuromonya...Osaka is actually not one of the more renowned ramen towns in this land, but I have much love for that fair city, and was curious to see what kind of ramen the patrons of this "Black Gate" (Kuromon) market like to get down with. 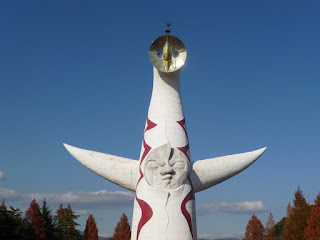 Apparently the shop has been around since the late 60s and really won a following when the nation descended on Osaka to attend the 1970 World Expo. Last time I was in Osaka's Nipponbashi neighborhood, I ended up eating eel liver and singing Sinatra to a crowd of 70 year olds, but I'm sure the area has better things to offer... 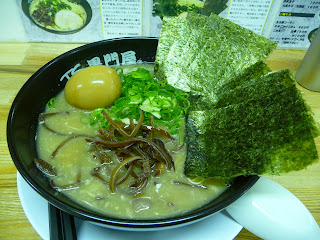 ...like the thickest bowl of tonkotsu (pork bone) soup you ever laid your eyes and tastebuds upon! My god man, I don't know how long they melted this stuff for, but Kuromonya's ramen is more like a stewy goo (in the best sense of the word) than "soup" per se. With thin and hard white noodles, it's similar in a way to Hakata ramen, but decidedly its own thing, with plenty of flecks of suspended fat dotting a broth made rich with a shôyû tare (soy sauce essence) that adds an almost indescribable sweet and tangy, yet deep and earthy taste. I could see myself getting HOOKED on this stuff. 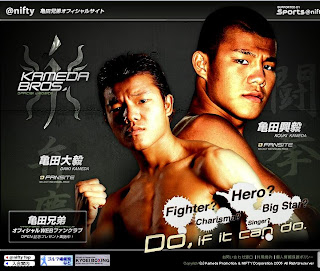 Already hooked on the stuff are these doods - the Kameda Brothers, a couple of badass boxers from Osaka. Would you really dare to challenge their taste in ramen? 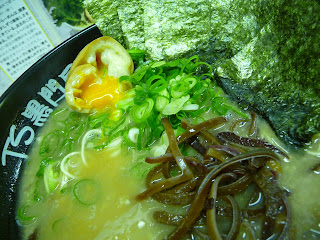 Other toppings include a generous helping of kikurage (woodear mushrooms), specially selected Kujô negi scallions from Kyoto (which were some of the best and freshest I've ever had), and a whole flank of nori seaweed that the staff offered me when I requested no roast pork. The eggs are from Nagoya Cochin chickens, and look how nice and runny that yolk is. This is really my kind of ramen. 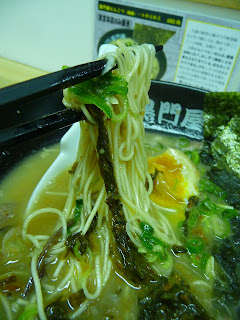 Noodles are extra thin Hakata-style, and you can order them regular, firm, or barely cooked, which is always a nice option. Don't miss the takana mustard greens atop the counter, which are some of the spiciest I've found - what did this place do, spy on me to find out everything I look for in a ramen joint? 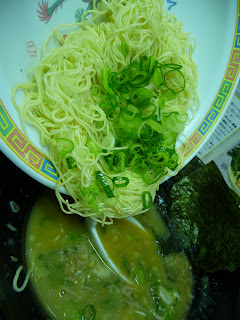 One serving is never enough, so I re-upped with a kaedama (extra helping of noodles). In addition to standard kaedama service, Kuromonya also offers what the call "yakidama" - noodles flash fried in the pan, which are all the better for pouring the remainder of your gooey porky soup all over. As Brian from Ramen Adventures put it, Osaka people will fry anything! The shop is still sort of in pre-open mode, and isn't open every day yet, and more menu items are still coming; a shio (salt) ramen is already available, and miso and shôyû options should be ready soon. A truly great addition to the neighborhood.
Posted by Nate at 7:40 PM

Great post! I was dubious about Osaka style-- can't remember ramenology being a big part of the gustatory life there- but this shop sounds awesome. Exactly the kind of bowl i would dig, i think.

Sounds like Ryan needs to make some plans to enjoy some noodling with Nate.

you just love it cause it's ooooosakan son. you saw a picture. i had some cheap ass kushiage and beers last night in ikebukuro - the shop's honten is in shinsekai...awww jeeah.