Last week, Brian from Ramen Adventures popped by 'Baba one last time before taking off to the (literally) greener pastures of ramen heaven Hokkaido for the summer. The number of truly pilgrimage-worthy shops in the greater 'Baba / Waseda vicinity that I have yet to hit is dwindling, and I'd say there's only about 20 (out of maybe 100) places to go before declaring the Waseda ramen zone officially eaten through. 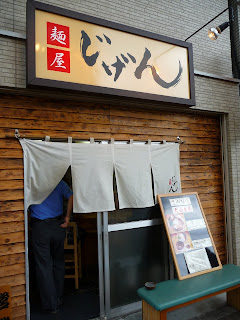 We both wanted something on the less oily side, so we decided to head to Jigen, located a few blocks west of Takadanobaba station. Jigen is definitely one of the buzzed-about shops on the block, and is the kind of place that pops up in most glossy magazine reviews of the 'Baba ramen scene. I knew it was famous for some strong fish broth ramen, which isn't usually my jam, but hey, I'm on a mission. 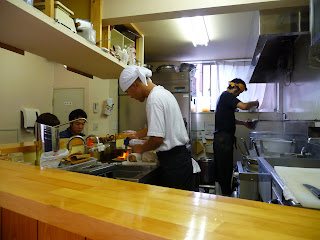 Inside, the shop is clean and comfortable with plenty of blond wood and plain decor; note the cook individually blowtorching each slice of the châshû pork! Jigen offers ramen or tsukemen, each available regular or 'extra strong' (nôkô). I tend to be an extra strong kind of guy, but I wanted to play it safe with fishy soup, so we both went with the regular. 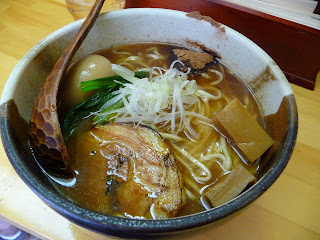 And here is the thing of beauty we received. I usually give Brian the pork before snapping my photo, but man, is that a pretty slice of châshû. Upon first glance, Jigen's bowl looks like a 'pakkuri' (blatant copy) of the uber-popular Watanabe down the block. When a certain style of ramen gets popular, shameless imitators tend to start popping up, copying the original's style. Jigen has the same super-fat menma (bamboo), the same thinly cut white scallions, even a nearly identical BOWL to Watanabe. And of course, both shops have a complex tonkotsu gyôkai broth, based on a blend of pork bone and assorted fish. 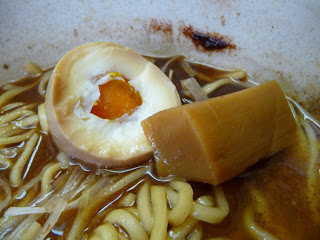 But you know what, maybe we place too much value on originality. When I visited Watanabe, I didn't dig it at all - way too fishy and trying way too hard to be hip and sleek; but a single sip of Jigen's soup made me tilt my head back and cackle. More mellow than Watanabe, less thick than Inoshô, Jigen has found what, for me, is the perfect balance of fishiness. A bit of powdered fish (maybe sardines?) comes on top, and even that doesn't make the broth too heavy. Rather, it stays sweet and deep all the way down. 'Sweet and deep all the way down' is a pretty dirty-sounding way to describe a bowl of soup, but you get the idea. And my god, how did they cut those bamboo chunks? They're the size of Dungeons & Dragons 12-sided dice (but woodsier than a forest full of elves). 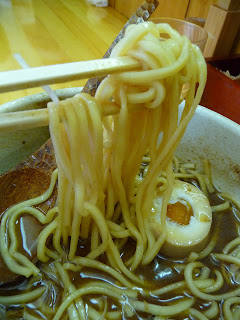 Jigen's noodles are medium thick, very straight, and ever so slightly flat, and stay nice and chewy until the end. Every piece of the puzzle is cut with great care, and Jigen manages to do so at a price cheaper than most of the other tonkotsu gyôkai soups that have taken Tokyo by storm over the last couple years. Brian and I walked in thinking "well, this place looks good, but I can probably guess exactly what it will be like," and both walked out shaking our heads at what a solid bowl Jigen dished up. Jigen wasn't just a pleasant surprise, but a bowl good enough to make me rethink my whole stance towards the fashionable fishy ramen mainstream of the Tokyo scene.
Posted by Nate at 8:34 AM

For a free extra slice of pork, hang out with Nate-