Chirimen-tei, you say? You might make the mistake that a shop with a name like "Chirimen-tei" serves, say noodles with chili sauce, which would be "chiri-men" in Japanese. But you would have your hyphen in the wrong place, and you would be wrong, sir. Rather, "Chirimen" refers to decorated, embroidered, and textured Japanese crepe fabric used for traditional cloth products: 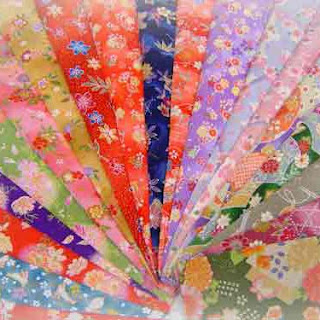 And it also refers to the tiny white fish also known as shirauo, whose bodies are as small and delicate as chirimen cloth. 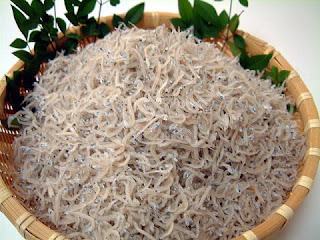 Gross. Or "Chirimen" could refer to the eponymous national chain ramen purveyor whose numerous outlets across Japan are nearly as numerous as the fish on this plate. Though thankfully, these nasty little critters don't pop up on the menu at any of the 100 or so Chirimen-tei outlets nationwide.

Chirimen-tei is a franchise shop run by the Tomos Corporation, an offshoot of MOS Foods, Inc., which is of course the parent company of MOS Burger, high-end fast food chain and regular haunt of this ramen writer. In the case of the burger joint, MOS stands for Mountain, Ocean, Sun, but at the corporate level, the acronym becomes Merchandise Organizing System. Tomos in turn stands for "Tomorrow's MOS", so your ramen at Chirimen-tei is brought to you through the Merchandise Organizing System of Tomorrow. How appetizing! 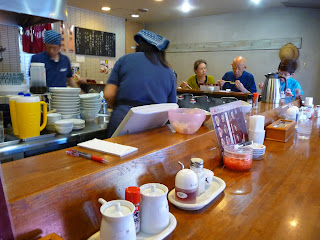 Fortunately, Chirimen-tei seems to be the kind of franchise shop that gives its franchisees a fair amount of freedom, not unlike Sanchin. I was expecting corporate sterility like at Yamaoka-ya, but inside the shop felt homey, with a middle aged couple at work in a large central kitchen area, while old folks and young couples sat and chatted around the counter. As might be expected, Chirimen-tei doesn't focus on any one particular style or genre, but offers a chain store take on every imaginable varietal, from Kyushu-style tonkotsu (pork marrow) to Sapporo miso to Tokyo shôyû (soy sauce), to Chinese-style tantanmen and tsukemen (dipping noodles). 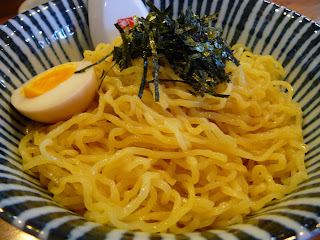 It can be hard to make a choice at shops like this - there's no way that a chain shop can pull off a high quality tonkotsu or miso soup, so shôyû or shio (salt) are usually safest. In one of the year-end ramen wrap-ups I read, a few critics made the point that chain shops like Chirimen-tei and Hidaya are really trying hard to keep abreast of changes in the ramen world. They might not be developing any new ramen, but they definitely keep their eyes on current trends, offering a chicken soup with lettuce and tomato in the style of Takaryû, several varieties of tsukemen, and so on. I decided to go with the latter, given that it was a hot day out and dipping noodles sounded mighty appealing. 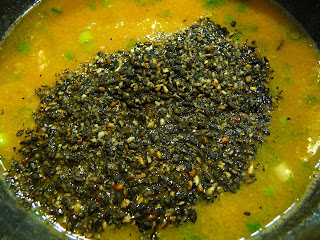 I decided to go with the kurogoma (black sesame) tsukemen, where you grind your own sesame seeds with a mortar and pestle and pour them into a thinner sesame broth similar to a Japanese-style tantanmen soup. Chirimen-tei's webpage begins their description of the dish by saying "Society has become much more stressful over the past 100 years." Fortunately, sesame seeds are high in vitamins A, C, and E, which allegedly help relieve stress. In any case, the broth tasted ok; a bit on the thin side, and certainly a far cry from the Sichuanese style tantan soup at Wantsûchi or Chinmaya, but competent if a bit bland. 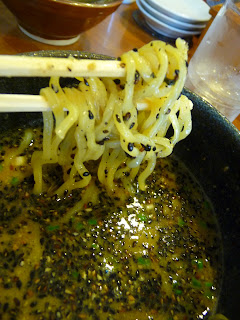 Chirimen-tei's achilles heel, however, is their noodles. This is where the true chain store colors come out, as the noodles tasted a bit cheap, and didn't have the kind of chewy thickness that good tsukemen should. I'm guessing this is probably the kind of generic curly yellow noodle that most US ramen shops use as their go to. But even so, Chirimen-tei's tsukemen were refreshing on a sweltering day (maybe it's the vitamin E?), and were still tastier than the tsukemen at Daiô down the block. I don't foresee myself (or anyone) going out of their way to eat at Chirimen-tei, but if you're out comparing fast-foodish options for lunch somewhere and there aren't any other ramen shops around, you could do worse.
Posted by Nate at 2:21 AM