After finishing up with classes and studies for the day, I took off biking across town to Akihabara, where my friends' band D-69 was playing a show.

I never miss a gig, so I'm probably just off screen in this video, moshing it up with beer in hand. I needed some pre-game stamina for anticipated pogo dancing for the Akihabara show, so I decided to stop and eat some ramen, so as to undo any potential health benefits I might gain from riding my bike across town and back. Akihabara, as is now widely known, is the worldwide mecca for anime freaks, computer geeks and other miscellaneous nerds, so while there's lots of ramen to feed greasy shoppers, most of it tends to be pretty mediocre, since chubby dudes in ill-fitting anime t-shirts don't tend to have the most discerning palettes.

Fortunately, just west of Akihabara is Kanda-Jinbochô. When I first started studying Japanese ten years ago, the second sentence I think I ever learned was "I went to Kanda to buy some books," right after "I will eat a sandwich." Kanda-Jinbochô (usually just Jinbochô for short), is the used book capital of Tokyo, with hundreds of shops selling all kinds of books, magazines, newspapers, and other assorted detritus of print culture. From original woodblock editions of medieval Buddhist texts to housewife bondage porn from the 70s, you can find it in Jinbochô. Amidst the booksellers, dimly lit jazz cafes, and publishing houses, there are a surprising number of ramen shops - Kanda-Jinbochô just might be one of the great unsung ramen zones of Tokyo. (Above photo from the web) 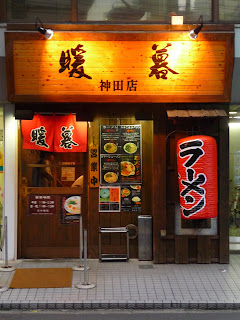 The shop I had set my sights on was Danbô, located just east of Jinbochô in Ogawamachi - from the Ogawamachi subway station, head south on Hongô-dôri, then make a right at the first light. Danbô is the only Tokyo-area outlet of a small chain based in the town of Chikushino, located halfway between Hakata (Fukuoka) and Kurume on the southern island of Kyushu. The location alone should tell you exactly what kind of ramen Danbô serves - straight up old school tonkotsu (pork marrow) soup with thin noodles in the grand tradition of northern Kyushu. I had never heard of Danbô before, but back in 2002 it placed number one in a Kyushu TV poll of top ramen shops, coming in ahead of nationally famous shops like Ichiran, Ippûdô, and Kurume Taihô. Hakata ramen and Kurume ramen are hands down my favorite styles, and I hadn't eaten a bowl of either in far too long, so I was looking forward to this one. 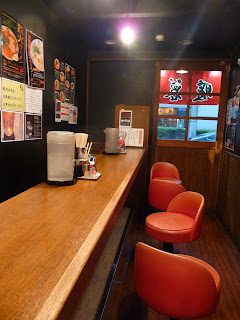 Danbô advertises a broth made out of 100 percent pork bones with no additives, but I think they must use some kind of purification process, because the sickly delicious stench of brewing pork marrow only hits you when you slide open the door, as opposed to from a block and a half away, like at Nandenkanden or Botan. The interior is small and narrow, but comfortable, with a kind of vintage modernist vibe, with good jazz on the stereo and sculpted red swivel chairs. 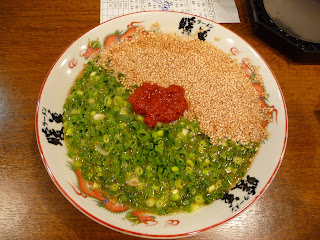 I decided to go with the "negigoma (sesame onion) ramen," which, as you can see, is packed with so many spring onions and sesame seeds that you can't even see down to the creamy brownish white soup below. A dollop of spicy Korean-style chili paste sits smack dab in the middle, a nod to Kyushu's proximity to the continent. Danbô's website recommends the sesame and onion for "customers concerned about their cholesterol levels" and "customers who love alcohol." Um, if you are worried about your cholesterol, I don't think a few onions are gonna undo the damage of a whole bowl of liquid pork. There's also the "rekka (flaming) ramen", which is allegedly extra spicy and somehow good for backaches? 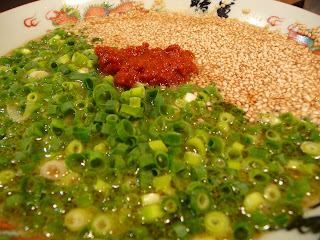 Jesus it was so beautiful. But I had to bust through that coating of perfectly layered green and brown garnish to get to the sweet sweet soup below. Milder and lest pungent then some Hakata tonkotsu ramen, Danbô's is delicious, and even someone not trained on tonkotsu could get down with it. I almost regretted getting the extra sesame and onion, since they almost turned the soup into a grainy porridge, and masked the more subtle than average creamy taste of the broth. 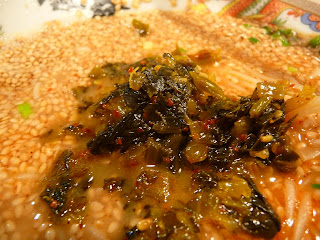 But of course, no bowl of Hakata ramen would be complete without a healthy amount of tableside takana (spicy pickled mustard greens) and a dollop of garlic. Strangely, no pickled ginger was available, but I nonetheless turned my bowl into a virtual garbage dump of toppings, with the creamy, spicy, vinegary, and garlicky tastes all coming together like a typhoon on the tongue. 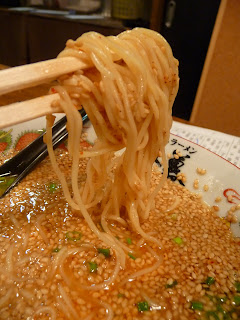 Like at any respectable Hakata-style shop, you can choose your own degree of firmness for the thin, straight noodles. Danbô eschews the specialist al dente vocabulary of shops like Mutsumon, and follows a simple "very soft" to "very hard" scale. The firm noodles are strong, firm, stretchy, and done just right, some of the best Hakata noodles I've had. 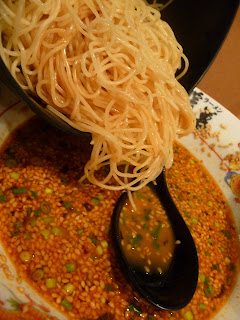 Naturally, just one bowl wasn't enough, so I called for a kaedama (second helping). Danbô's only downside is that prices run a bit high for Kyushu ramen, at about 700 yen a bowl with 150 yen for extra noodles - the upshot is that portions are a bit larger than at your average joint, which left me plenty full. I eat all kinds of ramen, but damn if I don't still love Kyushu ramen the best. I don't know if Danbô dethrones Shinjuku Hitotsubo, Tatsunoya or Kinmaru for my best bowl in town, but it delivers fo sho'. You better believe those extra noodles felt good sloshing around in my belly as I rocked out at the D-69 show!
Posted by Nate at 1:17 AM

That shot of the onions/sesame seeds is pretty much the craziest thing I've seen on this blog so far (to me!).

at this point i know all of them sorta, but i am real close with the singer and guitaristo.