I was not in the best of shape the morning after I ate the wicked spicy bowl of habanero ramen from Yagura-tei. Besides having torched my insides, i had managed to catch a cold after riding my bike 45 minutes home in the cold, driving rain. Whoops. Nonetheless, I had no intention of breaking my lunch date with Brian from Ramen Adventures. Would a little cold stop Klaus Kinski from eating a bowl of ramen? (One presume not.) 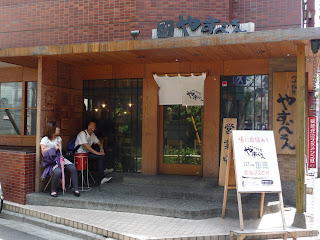 It was another hot sweaty day, so we decided to eschew a steaming bowl of melted pork for the more genteel sustenance of a lukewarm bowl of tsukemen (dipping noodles). After getting us lost on some residential backstreets, I finally found Yasubee, just down the block from the 'Baba branch of the famous Taishôken chain. It's not just the location that's close, since Yasubee is clearly drawing their taste model from the classic Taishôken tsukemen tradition. 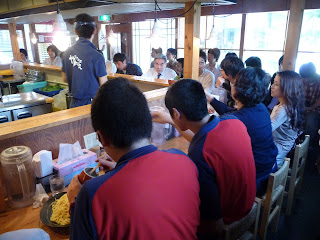 I had been curious about Yasubee for a couple of months, ever since my pal who was visiting from Hiroshima told me that Yasubee was the "best tsukemen she ever had." Apparently she isn't the only one to think that, because Yasubee was packed to the gills. We counted about 20 people in line in front of us, but as Brian put it, "would we really be ramen writers if we didn't like waiting in line?" But the line moved shockingly fast, and we were all the way to the front in just a few minutes. I read in "The Economics of Ramen" (book review forthcoming!) that one of the reasons behind tsukemen's popularity is that shops can turn customers much faster - it takes a lot less time to slurp down some room temperature noodles than it does to sup on a bowl of steamy soup. Thus, customers finish faster, allowing more customers to move through the line faster, raising the profit margin. 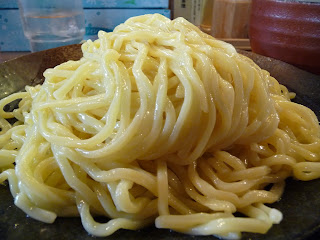 Like many tsukemen shops, one of the appeals of Yasubee is that you can select any size helping of noodles for the same fixed price. We didn't get too ridiculous, but there's no denying that that's a sizeable lump of flour. The noodles were so thick and slippery that when I lifted the plate the whole mass of them came within about a centimeter of sliding off the plate onto my lap. The dipping broth is definitely in the straightforward mildly fishy, mildly sweet model of shops like Taishôken, though not as thick, powerful, or vinegary as the former. Nothing exciting in this department, but I was happy to have something on the blander side, given my adventure at Yagura-tei the night before. Brian got the "spicy" broth, but it sounded like that was pretty low key as well. There's also a miso tsukemen (which I've heard is mega tasty, and is a bit unusual to find), but after the terrible bowl at Daiô, I decided to pass on that. 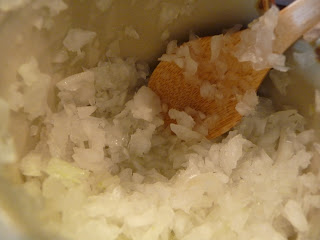 One nice touch, however, is the pot full of freshly chopped raw white onions, which add a bit of zing to the broth. There's also a smaller pot of fresh dashi (fish broth) powder, if you feel like you want a little pulverized sardine to liven up your palette. 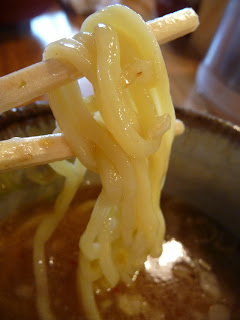 So, while Yasubee is nothing exciting and the taste is a bit on the mild end, the whole product is excellently executed. The noodles are some of the very best I've had anywhere, thick and chewy (mochi mochi), soft yet firm and eminently satisfying. But in the end I have to agree with Brian - "all these tsukemen joints taste kind of the same..." I have definitely come to appreciate tsukemen as a genre more than before, but in the end I prefer the places like Za Za Za, Guren, or Mitsuyadô that get inventive with their tsukemen, rather than just work in the Taishôken mode. Nonetheless, a solid tsukemen option in the hood.
Posted by Nate at 7:30 AM

I used to go here all the time when I lived in Takadanobaba! This is one of my favorite tsukemen places ^_^

@perridactyl - rad! it definitely hit the spot that day. got any other faves?