Miso ramen often gets typecast as a winter food - what better to warm up one's insides than a piping hot bowl of thick miso soup from the icy northern land of Hokkaido? I'd have to say there's something to this rationale - strong, heavy, and fatty blended miso and tonkotsu (pork marrow) soup isn't so much what the body craves to escape Tokyo's sweltering summers. But Tokyo ramen critics are calling 2009 the year of the miso, and a new Sapporo-style miso specialty shop opened up just around the corner, the latest comer to the ramen battle royale of 'Baba. 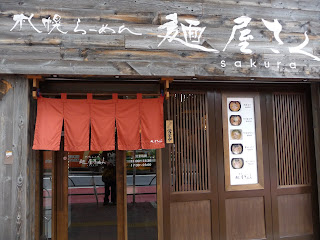 Occupying the former location of the now sadly defunct (and straightforwardly named) Ramen Shop, Sakura opened its sliding door a month or so back, located on the southwest corner of the Meiji-dôri / Waseda-dôri intersection, right next to Tsukemen Asahi, and across the street from Yamaoka-ya, Mitsuyadô and Watanabe. I only made it to Ramen Shop once, but I really liked the place and was bummed to see it go, so Sakura had big shoes to fill, specifically the galoshes that ramen cooks wear to protect their feet from sloshing liquid pork. 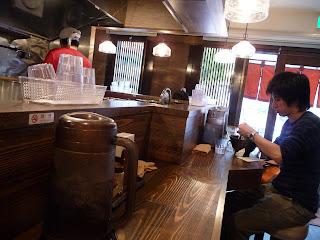 Inside, Sakura is comfortable if run of the mill, with a clean and polished dark wood interior common enough to the new generation of ramen shops aiming for a welcoming atmosphere and a broad clientele base. Despite advertising Sapporo ramen, Sakura (Cherry Blossom) is, as far as I can tell, an indie operation, rather than a branch of a chain or a shop based in Sapporo. 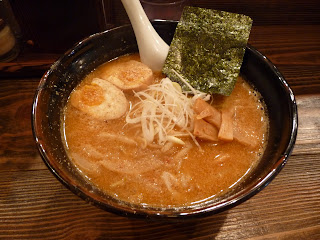 I got the house standard, the "tokusen (specially selected) miso", which is presumably a blend of a comically large number of different varieties of miso paste. The soup is a bit tangy, so I'm guessing that the darker "akamiso" (red miso) is probably in there somewhere as well as lots of obscure regional soy products. In addition to the standard (special) miso, there's also a "Sakura" miso, that's a bit spicy and has extra veggies, as well as spicy and a mild shio (salt) broths on option. 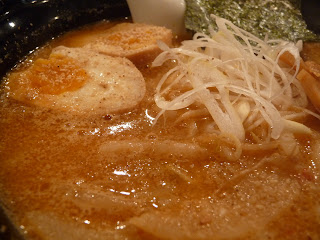 The bowl is topped with a few thinly shaved white onions, some fresh and crunchy menma (bamboo shoots), then dusted with a thin layer of ground sesame. The soup is rich and thick, but not quite as flavorful as some of the other Sapporo-style shops around town. Everything is in order and beautifully presented, but there's nothing that really takes it to the next level. Totally tasty, but everything is perhaps so well blended and planned that the bowl gets boring after a while. I do have to give props to the egg, which, while a bit firmer in the yolk than I like, really melted in the mouth and had a strong taste, unlike most ajitama (soy poached eggs) that just taste like plain boiled eggs. 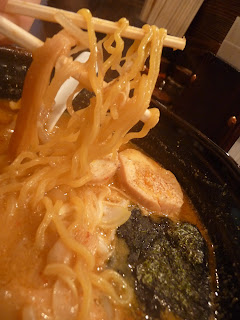 In classic Sapporo style, the noodles were medium thick, curly, and very yellow. Again, pretty and functional, but nothing remarkable. At 800 yen (about 8 dollars) a bowl, with an extra 100 yen for the egg, Sakura runs on the pricier side, and I'm not sure that the cost is justified. It's definitely the best miso ramen on that particular block, but you've got the outstanding Junren a 10 minute walk to the west and the solid Uoranzaka a 10 minute walk to the west, so why not walk the extra few hundred meters - you probably need to burn some calories after eating a hearty bowl of ramen anyways!
Posted by Nate at 2:12 AM